Figure 1: The number of vacancies increased to more than 1 million in Aug 2021 while unemployment rate continued its downward trend to 4.6% in quarter ending July 2021 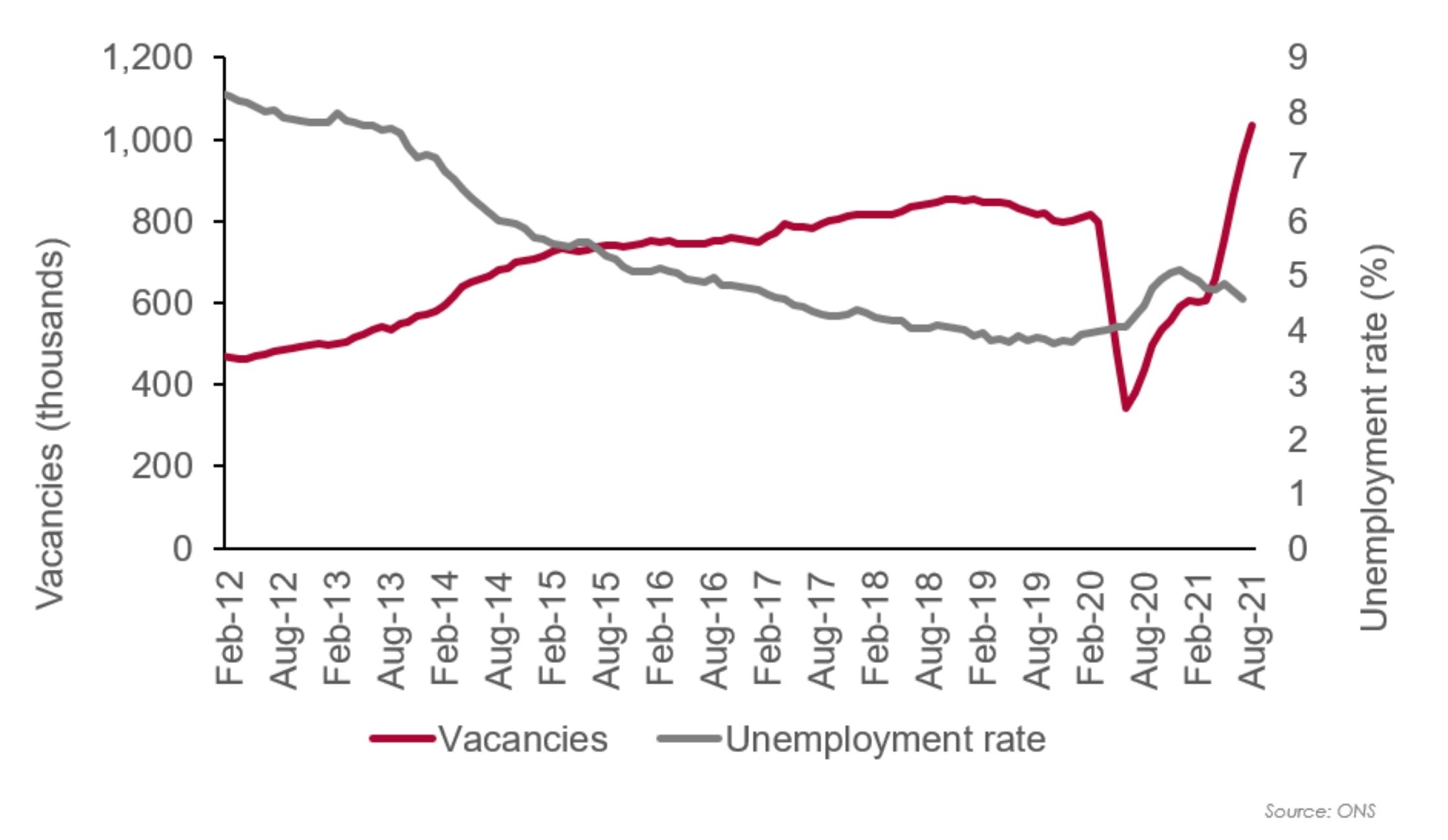 The unemployment rate has decreased further from 4.7% in the quarter to June 2021 to 4.6% in the quarter to July 2021, continuing its decreasing trend from May 2021. The ONS notes that young people aged 16 to 24 years old have seen a robust growth in employment rate and a corresponding fall in unemployment and inactivity rates, thereby reversing a trend seen earlier during the pandemic.

From June to August 2021, the estimated number of vacancies hit its highest level since records began, reaching over 1 million. Vacancies have grown by 35.2% from the previous quarter, and the ONS highlights the Accommodation and food services industry as the highest driver of growth, rising by 57,600 (75.4%). The size of the workforce was estimated to be 34.8 million in June 2021, representing a decrease of 856,000 (c.2%) from December 2019.

Both Consumer Price Inflation and Producer Price Inflation saw a steep incline in August. CPI reached an alarming 3.2%, far ahead of the Bank of England’s 2% target. ‘Transport’ was the largest contributor of the increase (responsible for 0.87 percentage points of the change) driven by shortage of transport staff. According to the ONS, a further factor driving the CPI increase was the ‘Eat Out to Help Out’ (EOtHO) scheme which was active in August of last year. Since the scheme subsidised food in restaurants, the 12 months price increase has consequently been higher in 2021. Indeed, other major drivers of the spike were ‘restaurants and hotels’ and ‘food and non-alcoholic beverages’ (each contributing c.0.7 percentage points of the increase). Besides the EOtHO scheme, staff shortages also impacted both industries. Likewise, of all of the ONS categories only ‘Health’ saw a meaningful decline (0.03 percentage points).

PPI also saw a continued rise, moving from 5.1% to 5.9% from July to August. Similarly to CPI, this was driven predominantly by an increase in ‘Transport Equipment’ and ‘Metals Machinery and Equipment,’ (2.07 and 1.71 percentage points respectively) whilst being offset slightly by a decline (0.31 percentage points) in the price of ‘Chemicals and Pharmaceuticals.’ Fuel price increases also contributed somewhat (0.65 percentage points). This suggests supply chain and other supply-side issues can be expected to continue to provide inflationary pressure in the future.

Figure 3: GBP remained largely stable against the Euro and the Dollar throughout August into September with a small drop in GDP/USD in mid-August

The GBP/EUR and GBP/USD exchange rate has remained relatively stable throughout the month of August which has continued into September, despite recent announcements of tax rises in the form of a national insurance increase. The pound slipped against the dollar during August but has since moved to 1.38.

On 9th September, the ECB had a key meeting resulting in announcements to slow down its bond-buying programme, a key tool used throughout the lockdowns to support the eurozone economy. Analysts accredited this decision to a desire by the ECB to create a stable and sustained recovery get inflation to reach its 2 percent target. This has helped to create mild optimism in the markets and the Euro made modest gains, but with the persistence of COVID cases in the US, UK and Europe, there is still caution.

Figure 4: Market anxiety grew in during August, with all major stock markets peaking and then falling during the month

After months of steady increase, the FTSE 100 was largely flat in August and dipped slightly in September. FTSE 250 and S&P 500 indices, meanwhile, grew in the first half of the month and fell in the latter half with the downward trend continuing into early September. As a result, whilst they still closed net higher, the stock market conditions looked less favourable in August than previously. This came as the Federal Reserve indicated it may soon reduce support for the economy, which boosts the stock markets indirectly through asset purchases. There were also signs of weakness in the Chinese economy and increased anxiety over coronavirus globally, both of which damaged confidence.

Figure 5: Throughout August, the Delta variant and OPECs decision to slowly raise production limits has caused an overall drop in oil prices with the prices increasing slightly in September

Throughout August, the average daily price per barrel of Brent crude oil was US$70.75, a significant decrease from $75.16 in July. The delta variant continued to put pressure on the market with OPEC’s decision to slowly raise production limits causing a further overall drop in price. In August, oil experienced the biggest week of losses in 9 months, with countries such as Australia and China imposing strict travel restrictions and tighter disinfectant controls at ports. Furthermore, global jet fuel has also not experienced a confident market this summer. The oil price has since shown a slight increase to reach US$73.59 on 20 September.

Figure 6: All PMIs fell in August 2021, albeit only slightly in Manufacturing

All PMIs declined in July and August 2021 after peaking in May or June 2021. Services and Construction Purchasing Manager’s Indices fell steeply in both August and July, from 62.4 in June to 59.6 in July and 55 in August and from 66.3 in June to 58.7 in July to 55.2 in August respectively. IHS Markit attributed this to a tightening labour market, reduced tourism and Brexit supply-chain disruption in the service sector, and supply chain disruption and rising costs in Construction.

While Manufacturing PMI fell very slightly from 60.4 in July to 60.3 in August, it remained high compared to its long-run average. The slight decline can be attributed likewise to supply chain disruption and input price increases, which was offset somewhat by a growth in manufacturing exports. Producer confidence remained high in the Manufacturing sector, but inflationary pressures on producers continues to build.

Despite the decline in these PMIs, it should be noted that they all remained well above the 50-point mark, a trend which has continued since March 2021. This indicates continuing expansion in each service but at a slowing rate.

Figure 7: YouGov/Cebr Consumer Confidence decreased slightly from 113.2 in July to 112.9 in August and the GFK Consumer index reached pre-pandemic levels at –8 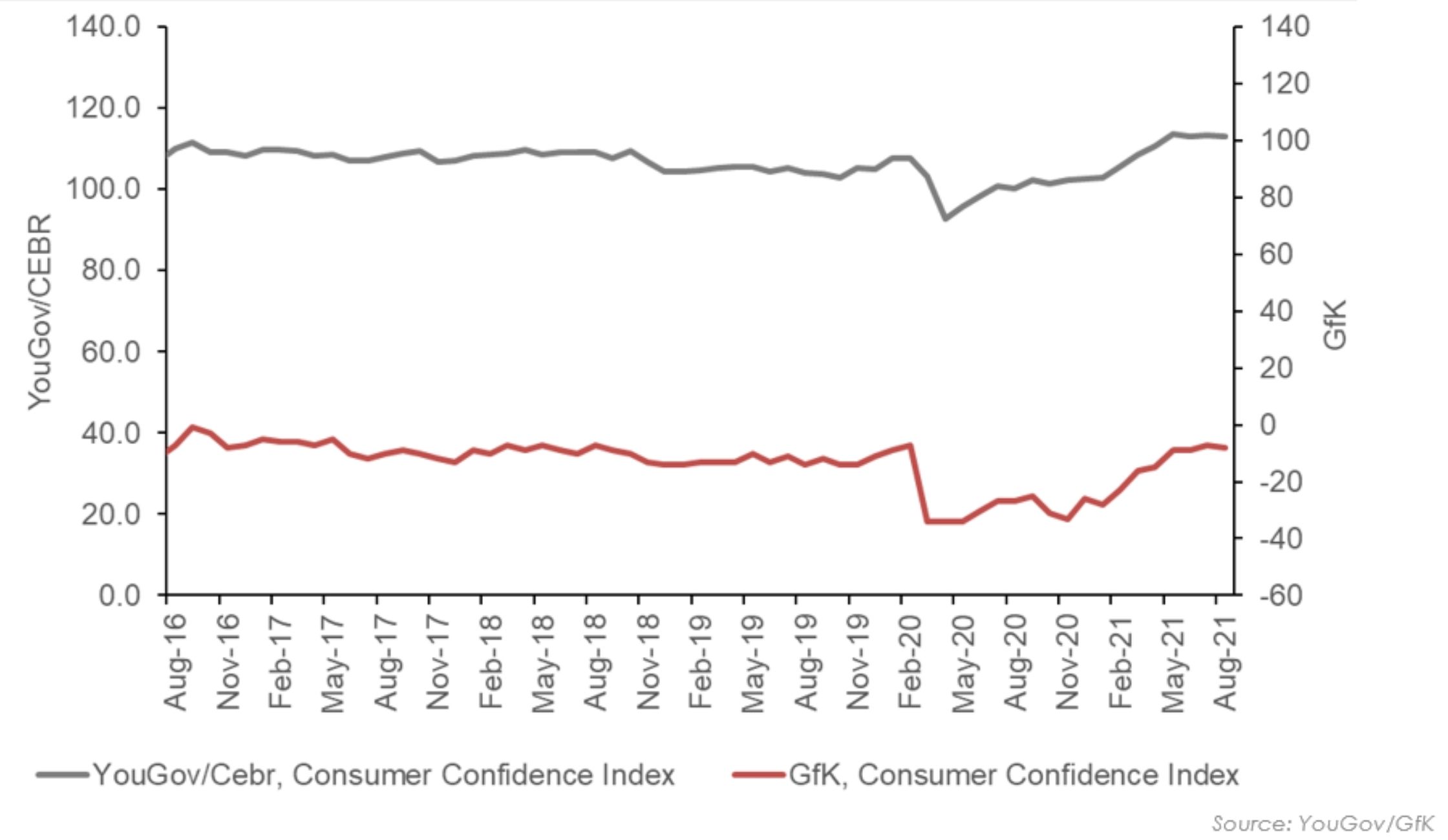 In the month of August, the YouGov/Cebr Consumer Confidence Index decreased slightly from 113.2 to 112.9, but overall remained high due to the lack of lockdowns and social restrictions. YouGov/Cebr attributed the largest fall in measures to home value (measure has declined by 2.6 from July), highlighting that more homeowners believed their property was worth less in August. GfK’s Consumer Confidence Index also showed a small decrease from -7 to -8 with GfK’s Client Strategy Director noting that the decrease was following a cooling of inflation and expectations for the consumer’s finances for the next year stabilising. Despite these small decreases, both values show a continued positive outlook amongst consumers as the economy makes a slow recovery from the COVID restrictions. The GfK also noted that in August, consumers may be moving towards saving more than spending as the five-point fall in the major purchase index had been counteracted by a five-point rise in the savings index.