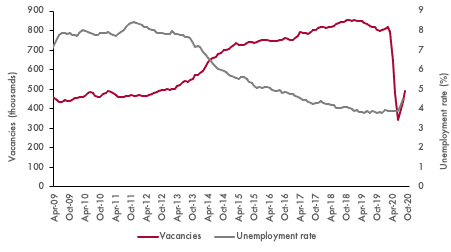 Figure 1: The UK unemployment rate spiked upwards despite a large increase in the Vacancy

The latest ONS estimates for June to August 2020 (released in October 2020) indicated that 1.52 million people are unemployed which is a rise of 209,000 from one year ago and 138,000 from the prior quarter. The unemployment rate had increased to 4.5% from 3.9% and 4.1% respectively over the same period. Meanwhile, the unemployment benefit claimants had also increased from 1.5 million in March to 2.7 million in September. The number of vacancies had risen from 344,000 in April to June 2020 to 488,000 in July to September 2020 with the increase being caused primarily by small enterprises. The BBC article on 14 October 2020 here highlighted that most redundancies had impacted the hospitality, travel and recruitment sectors with young people aged 16 to 24 making up 60% of the decline in employment.

Going forward, the unemployment rate is expected to increase once the furlough scheme is replaced by the wage support scheme in November and Covid-19 restrictions causing eateries and hospitality or leisure venues to shut in many areas in England and Scotland.

Consumer Price Inflation (CPI) 12-month inflation rate fell to 0.5%, the lowest since June 2016. Most of this decrease can be attributed to lower prices in the eateries in line with the Treasury’s ‘Eat Out to Help Out’ scheme, which subsidised meals from Monday to Wednesday for up to 50% (capped at £10 per diner) in August. Likewise, a VAT cut for the hospitality sector from 20% to 5% from 15 July 2020 to 12 January 2021 further contributed to lower consumer prices.

Producer Price Inflation (PPI) remained flat at -0.9% in the year to August 2020. PPI level is consistent since June 2020 and has remained negative since the first full month of the Coronavirus outbreak in the UK in April 2020. This deflationary pressure is driven primarily by decreasing oil prices which continue to be significantly lower year-on-year. Meanwhile, Alcohol and Tobacco prices have increased by 2.7% in PPI over the last 12 months to August, partially offsetting the falling oil prices.

It is likely that the inflation output will remain low for the short term (below the Government’s official target of 2%) as consumer confidence has not returned to pre-Covid levels. The negative sentiment here relates to concerns over an unemployment surge after the furlough scheme ends on 31 October 2020. As the ‘Eat Out to Help Out’ scheme ends, inflation relating to eateries will probably turn upwards. However, prices in most other products is expected to rise by less than previous years. 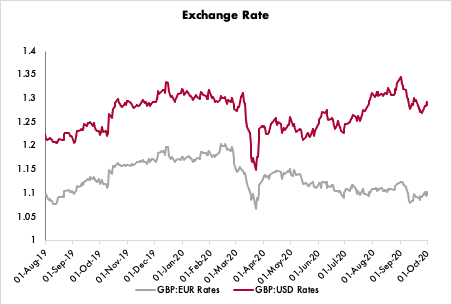 Figure 3: GBP recovers relative to both EUR and USD after slide in the beginning of the month

GBP had depreciated against both USD and EUR in the first half of September before partially recovering in the latter half of the month. The USD exchange rates had declined from 1.345 on 1 September to 1.2782 on 11 September before partially recovering to 1.2924 on 30 September. Meanwhile, the EUR exchange rates had declined from 1.1236 to 1.0805 before partially recovering to 1.1023 over the same period. GBP fluctuations have been influenced primarily by the economic uncertainty and moving market uncertainty over no-deal Brexit. In particular, the passing of the Internal Market Bill by Westminster in September had concerned investors about the higher risk of hard Brexit in end-2021. The partial recovery of GBP towards end-September can be attributed to the July borrowing figure which had been revised down from an initial figure of £25.9b to £15.4b. 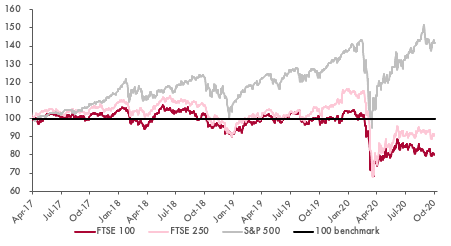 Both FTSE 100 and 250 indices saw a continuation of their previous steady decline during September, in part due to continuing fear of a second wave of Coronavirus. The S&P 500, meanwhile, declined quickly from an all-time peak at the beginning of the month, erasing all gains in August. This likely reflects growing concern about the Pandemic, as cases continue to rise in the US. Furthermore, there is more political uncertainty, following the failure of the US Congress to pass more stimulus packages and in advance of the General Election. 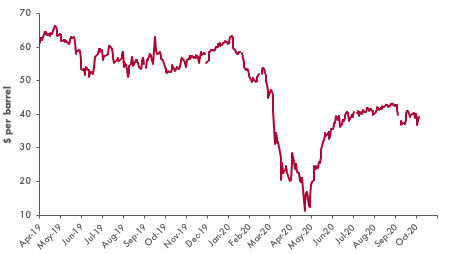 Figure 5: Oil prices resume volatility after a period of relative stability amidst concerns over continued coronavirus disruption on both the supply and demand side

September saw more volatility in the oil price, as supply and demand both continue to be disrupted by the Coronavirus. Oil production in USA fell due to Hurricane Laura, which hit towards the end of August. Meanwhile, OPEC production continued to increase but remains below the level at this time last year as the group continued to produce within the agreed supply ceiling. Supply is expected to continue to rise in the coming months whilst the demand outlook is very uncertain, in part due to the prospect of future waves of CoVid-19. This means that the oil price and its effect on both output and inflation are highly uncertain at this stage.

UK Services and Manufacturing Purchasing Managers’ Indices fell for the first time since April, reflecting a change in economic confidence in both sectors.

Services, the largest sector in the UK, saw a particular decline of nearly 3 points from August although the September reading of 56.1 was still above 50.0 which indicates growth. Growth in the Services sector was driven primarily by Business-to-Business (B2B) services while other sub-sectors such as Hotels, Restaurants and Catering saw a decline in business activity due to the scaling back of government support and Covid-19 restrictions.

Meanwhile, Manufacturing PMI declined from 55.2 in August to 54.1 in September as the rate of growth dipped slightly. Manufacturing had continued its expansion in September, driven by a combination of firms re-opening, employees coming back to work, higher customer demand and more robust export demand from Europe, Asia and North America.

Construction PMI rose from 54.6 in August to 56.8 in September with the strongest expansion seen in residential, followed by commercial sector. The expansion can be attributed to the release of pent-up demand following the easing of Covid-19 restrictions.

All PMIs have remained above their respective levels in January 2020. 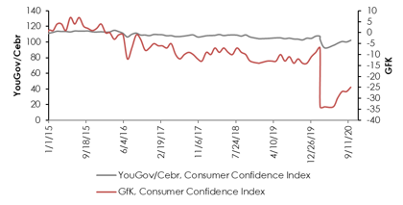 Figure 7: Consumer confidence continues its slow recovery since the initial coronavirus outbreak in the UK

Both the YouGov/Cebr and the GfK Consumer Confidence Index continued their steady increase in September. YouGov/Cebr analysis highlighted that the increase is driven by rising business activities and optimism over expected property prices in the following 12 months. The rate of increase slowed, however, indicating a possible declining confidence in an uninterrupted economic recovery. Both measures are still below their pre-pandemic levels, but consumers do not appear to be as concerned about the rise in cases as are Purchasing Managers.