Figure 1: The unemployment rate from June to August decreased to 4.5% and job vacancies from July to September saw a record high, reaching a total of 1,102,000 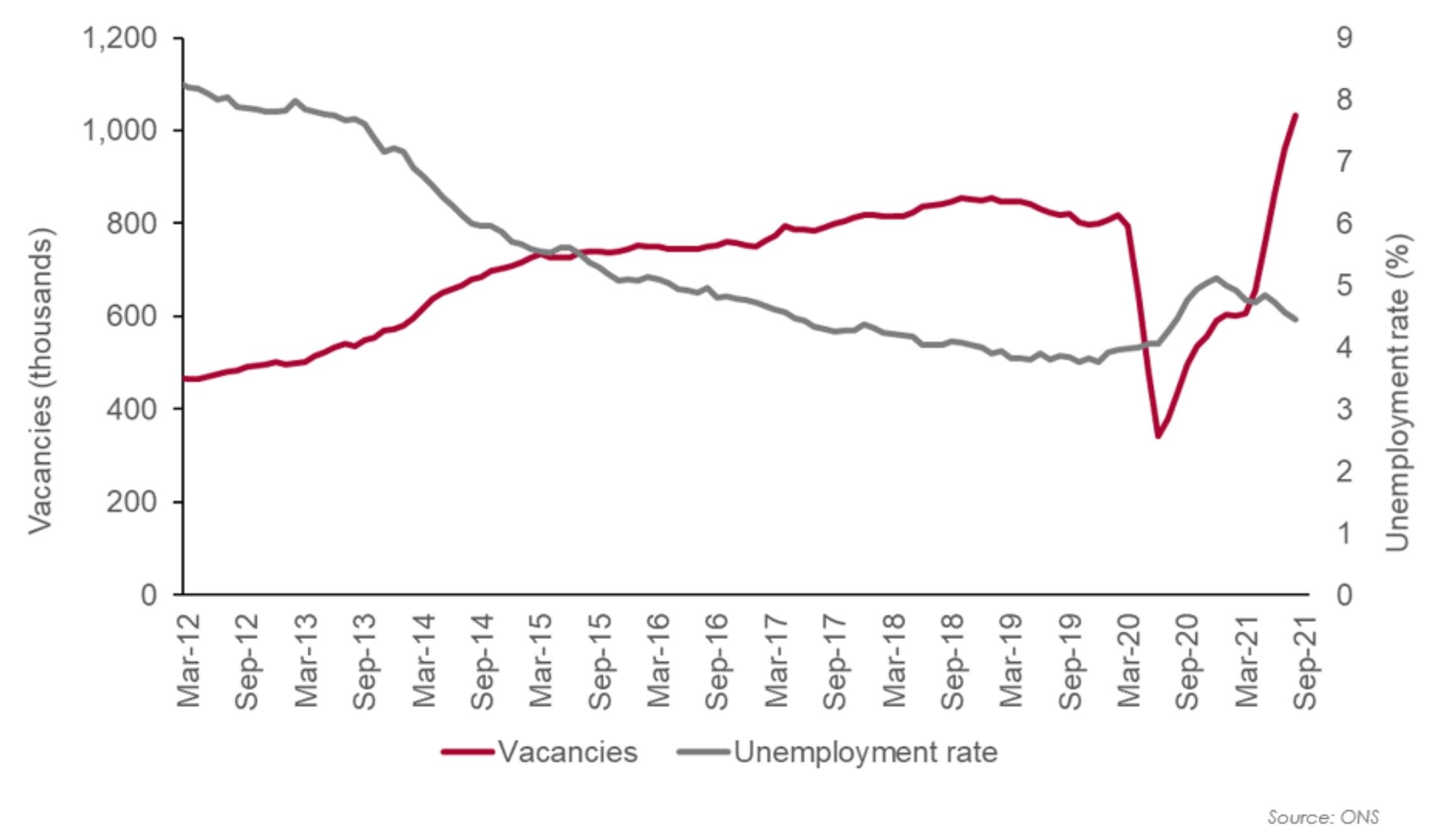 The ONS data showed the employment rate for June to August 2021 increased by 0.5% to 75.3% and the unemployment rate decreased to 4.5%. Job vacancies from July to September saw a record high, reaching a total of 1,102,000. Vacancy growth is coming from all industries, with the largest increase seen in accommodation and food service activities.

The Institute for Employment Studies highlighted that the combinations of record vacancies and falling unemployment had created the lowest number of unemployed people per vacancy in at least fifty years. The main areas of increase in economic inactivity were in people over 65, particularly women, driven by ill health and reaching the retirement age. Young people under 25, who appeared to be exiting the job market to pursue full-time education, were also a key driver of economic inactivity.

In addition to the vast amount of vacancies, the ONS highlighted the negative impact on Britons as they dealt with short supplies in supermarkets, fuel shortages and inflation throughout September.

Whilst wages increased across many sectors due to the large vacancy gap, the ONS revealed that workers felt pessimistic about the future of the job market. Labour supply is not currently keeping up with labour demand and the latest figures continue to demonstrate that employment overall is not recovering to the same extent as unemployment.

Consumer Price Inflation (CPI) increased by 3.1% in the year to September 2021. While this was a slight decrease from 3.2% in August, it was still far ahead of the Bank of England’s 2% target. ‘Transport’ was the largest contributor, responsible for 0.91 percentage points of the change due to higher motor fuel and second-hand car prices. According to the ONS, a further factor driving the CPI increase was ‘Housing and Household Services’ at 0.69 percentage points, driven by higher housing costs, council tax, rent and utility bills. Out of all of the ONS categories, only ‘Restaurants and Hotels’ saw a meaningful decline (0.31 percentage points).

Producer Price Inflation also saw a continued rise, moving from 6.0% to 6.7% from August to September. Similar to CPI, this was driven predominantly by an increase in ‘Transport Equipment’ and ‘Metals Machinery and Equipment,’ (2.23 and 1.81 percentage points respectively) whilst being offset slightly by a decline (0.28 percentage points) in the price of ‘Chemicals and Pharmaceuticals.’ This suggests supply chain and other supply-side issues can be expected to continue to provide inflationary pressure in the future.

Figure 3: Throughout October, the GBP/EUR exchange rate appreciated slightly to 1.19 and the GBP/USD held at around 1.38 before depreciating slightly to 1.17 and 1.36 respectively in early November 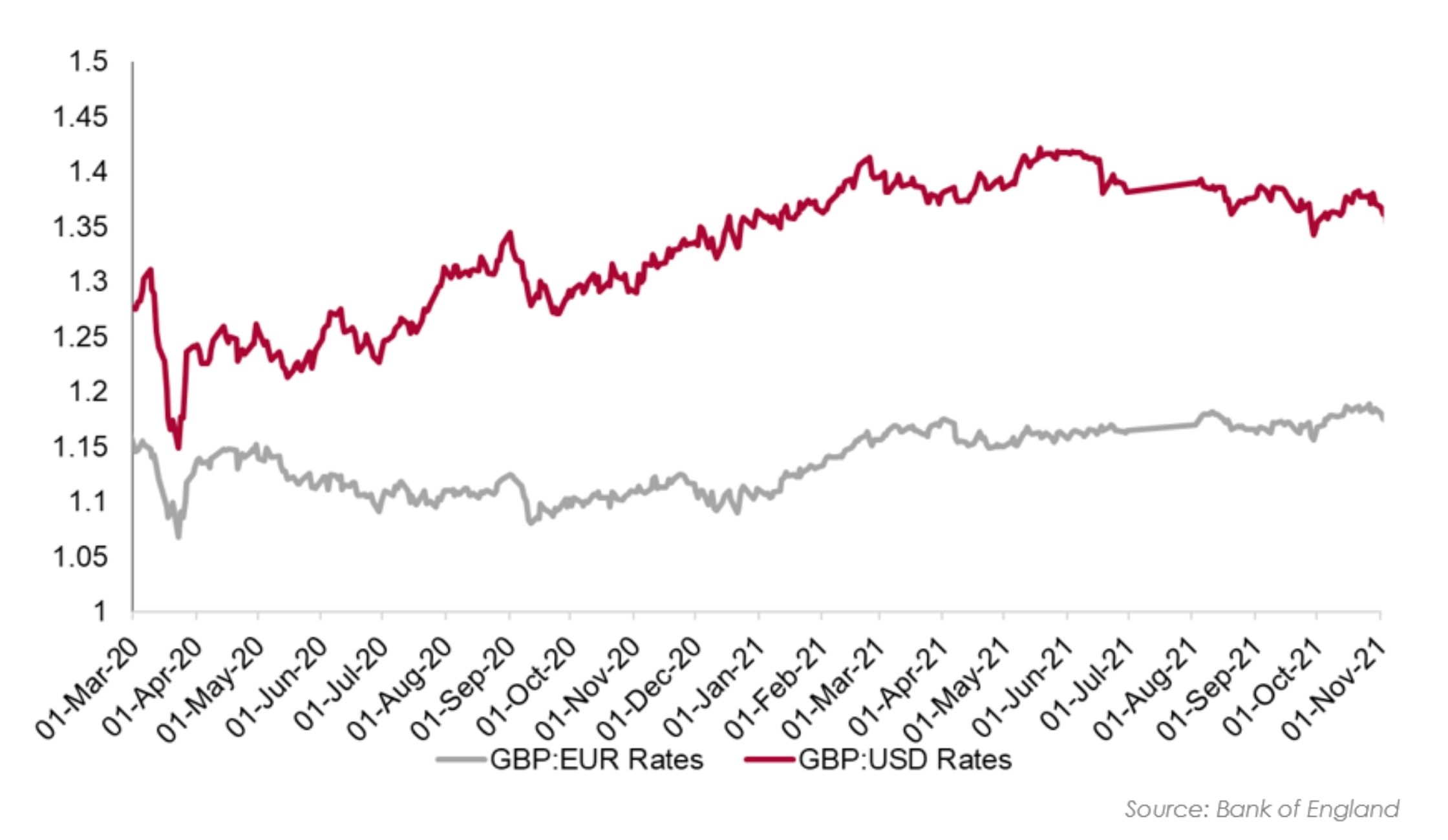 The GPB/EUR exchange rate increased slightly from 1.16 in end-September to 1.19 towards end-October while GBP/USD held at 1.38 despite a strong USD. This was driven by expansions in the UK economy and expectations in the market of UK interest rate increases. Although the BoE had signalled that action would be taken to curb inflation, the increase did not materialise in November, thereby causing GBP to depreciate slightly to 1.17 and 1.36 against EUR and USD respectively as of 10 November. Christine Lagarde, ECB Chief, noted that a similar move is probable in Europe in order mitigate inflation, in addition, there was an increase in Euro zone bond yields due to a re-calibration of interest rate expectations which may have future impacts on exchange rates.

After months of steady increase, the FTSE 100 dipped slightly in early September before increasing thereafter. FTSE 250 and S&P 500 indices also followed a similar trend of declining in September before increasing from early October. Thisismoney website attributed the increase to housebuilders and banks performing well as well as energy firms benefitting from higher energy prices. According to Reuters, FTSE indices also benefitted from the Chancellor’s announcements during the Autumn Statement of projected higher economic growth and reduced borrowing. This came as the Bank of England did not raise interest rates as expected in November. The S&P’s increase was driven by the technology, and banking sectors with the latter being able to utilise the cash reserves they had saved during the pandemic.

Figure 5: Oil jumped to the highest level in three years towards the second half of October reaching US$85 per barrel with tighter global supply coupled with strengthening fuel demand before decreasing slightly to US$82 in early November

Brent Crude Oil jumped to the highest level in three years towards the second half of October reaching up to 85 dollars per barrel. At the beginning of October, despite these spikes in prices, OPEC+ made the decision to stick to raising oil prices slowly.

In the US, prices rallied throughout October as inventories reached their lowest level in three years. Oil prices were previously high due to the impact of the pandemic and the OPEC+ agreement to withhold from the market, but now a global shortage of gas has pushed the price of oil up further, with anticipation that power generators may switch to oil in order to provide electricity. These increases in prices may well add to the increase in inflation and therefore the cost of living in future months although Al Jazeera had added that the US is likely to release some of their oil reserves in such a scenario.

Figure 6: All PMIs rose in October 2021 after dips in September 2021 for Manufacturing and Construction

IHS Markit attributed the improvement in Services PMI to higher domestic and export demand from June after the re-opening of the economy and relaxed travel regulations. This was despite highest inflationary pressures in more than 25 years amid labour supply crunch and supply chain pressures.

Construction recovered from the lowest PMI since January after an increase in output following relaxed lockdown measures and higher demand with house building seeing the highest recovery. Similar to Services, the Construction industry was also adversely affected by supply shortfalls and higher costs.

Manufacturing PMI increased slightly from 57.1 in September to 57.8 in October although this was still lower than the high of 65.6 in May. The Manufacturing sector had benefitted from higher demand, purchases and employment. However, longer vendor lead times as well as crunch in staff and materials had held back further growth.

Figure 7: YouGov Consumer confidence has fallen by 1.3 points to 109.2 for October and GfK Consumer Confidence Index told a similar story with a drop of four points to -17 in October 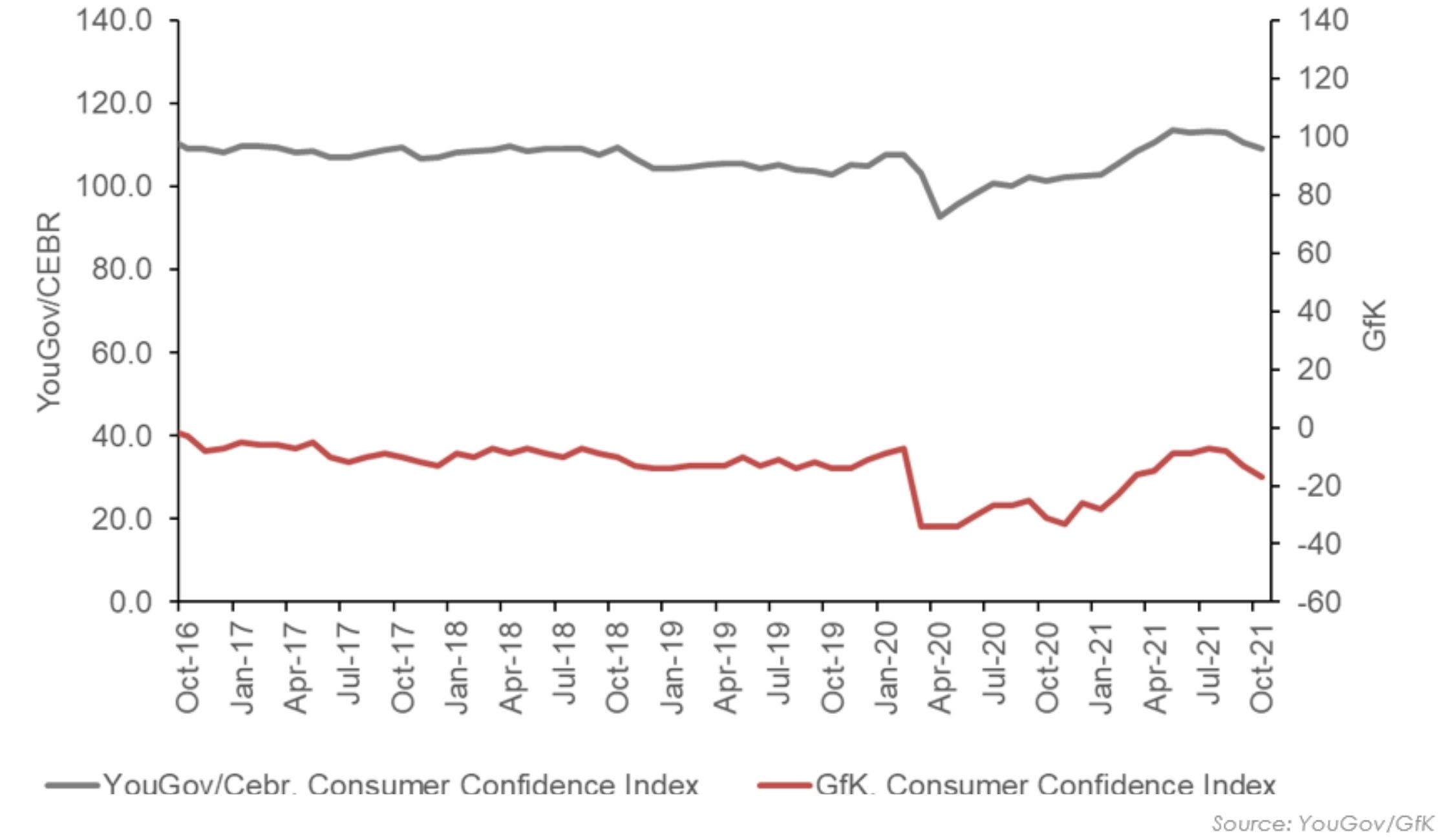 Consumer confidence fell further by 1.3 points to 109.2 for October, continuing a further downward trend from a high of 113.2 in July. However, this is still above 100 so customers are more confident than not. The GfK Consumer Confidence Index told a similar story, with a drop of four points to -17 in October. With all measures down compared to September, depletion in household finances were a contributor to the fall in confidence as consumers continue to be concerned about inflation and tax increases.  This, combined with the likelihood of future interest rate rises and increasing covid cases threatening to disrupt the Christmas period, have removed the initial increases in confidence after the previous lockdowns.

Client Strategy Director at GfK, Joe Staton noted that these drops in confidence will have a direct impact on consumer spending habits, with the major purchase index falling four points to an overall score of -10. After enjoying 6 months of post-lockdown optimism, this is a sign that the financial mood in the UK is dampening.