Figure 1: The UK unemployment rate spiked upwards due to job losses being predominantly driven by the South East region 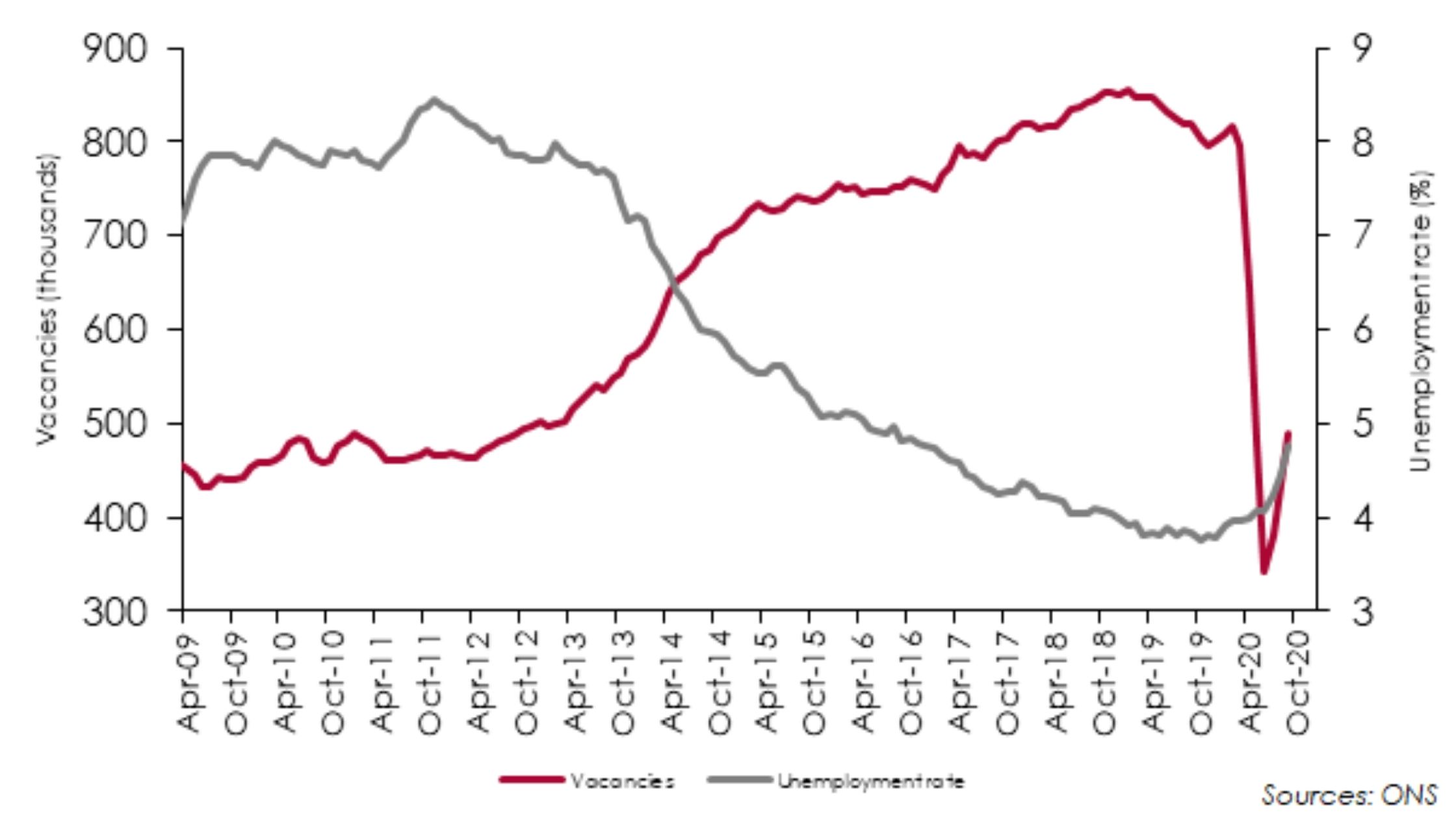 Employment in the latest Office National Statistics (ONS) data for July to September 2020 saw a fall of 246,593 jobs (0.7%) relative to the same period in 2019. Unemployment increased in most regions during this period with the job losses being predominantly driven by the South East region, where there are over 120,000 fewer jobs in 2020 compared to 2019. Likewise, the unemployment rate increased sharply to 4.8%, the highest rate since Q3 2016. Expected redundancies initially projected for the original end date of the Job Retention Scheme in October 2020 will likely to be prevented or delayed now due to the extension of the scheme to January 2021. However, the increased Covid-19 restrictions mean that the outlook for employment is negative.

PPI had improved from -1.7% in the year to September 2020 to -1.4% in October. However, the figure had remained in the negative territory, reflecting continued deflationary pressure on the supply side. Based on the ONS analysis, this pressure is driven primarily by decreasing oil prices which continued to be significantly lower year-on-year at -35.7%, followed by Chemical and Pharmaceutical at -0.5% and Paper and Printing at -0.4%. Meanwhile, Alcohol and Tobacco prices have increased by 2.8% in PPI over the last 12 months to October 2020, partially offsetting the falling oil prices.

CPI 12-month inflation rate ticked up from 0.6% in September 2020 to 0.7% in October 2020. ONS analysis indicates that the biggest contributor to the CPI increase in October was Recreation and Culture at 0.26 percentage points (p.p.), followed by Other Goods and Services at 0.22 p.p. and Housing and Household Services as well as Transport at 0.16 p.p. each.

Returning to significant restrictions is likely, again, to result in continued deflationary pressure. As a result, both CPI and PPI can be expected to fall over the next month. During the first lockdown, from March 2020, PPI was in the negative territory, whilst CPI declined substantially but still remained positive. This can again be expected during October, due to the closing of many ‘non-essential’ businesses.

Figure 3: GBP recovers relative to EUR; USD depreciates amid the US elections 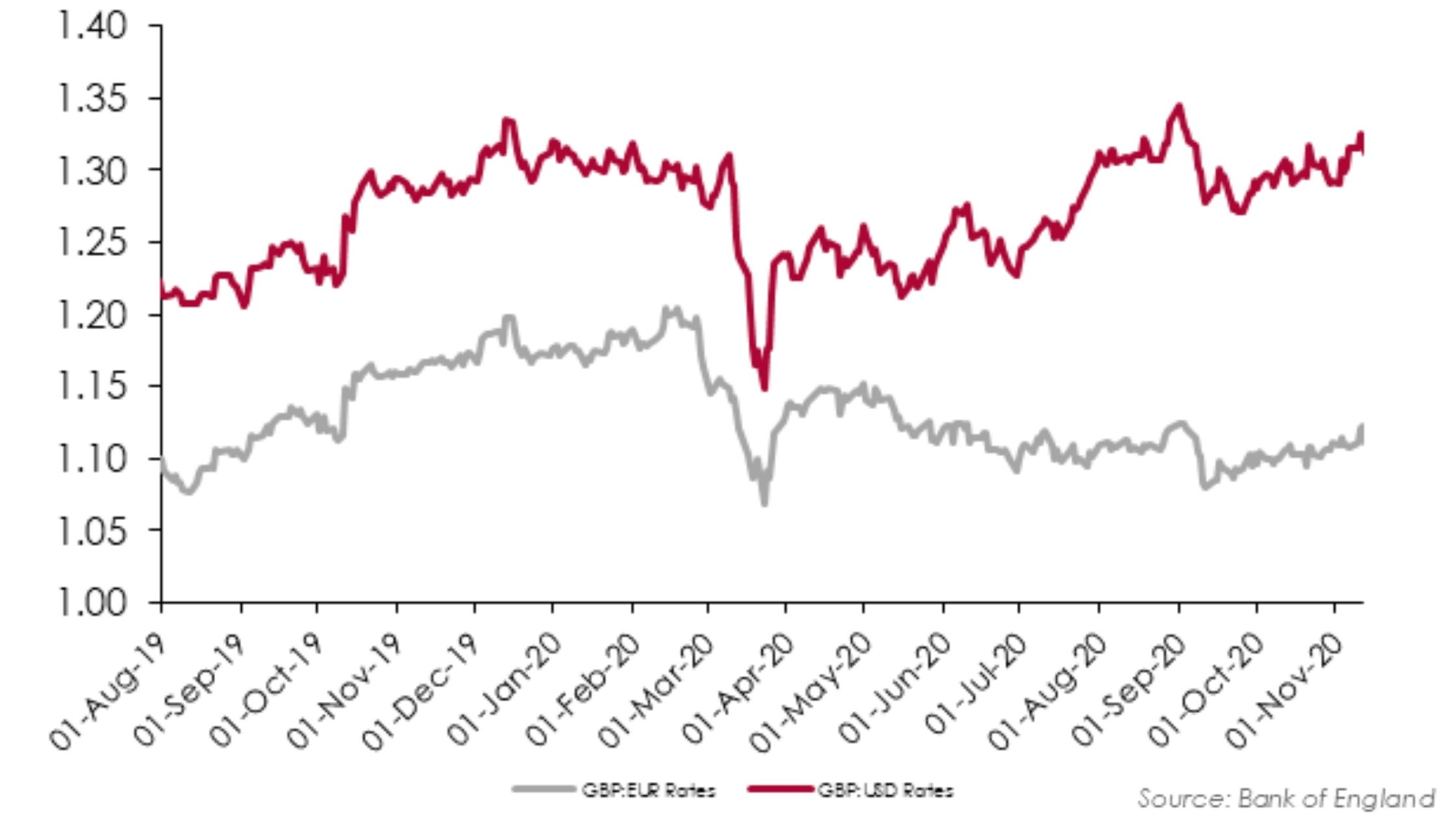 A steady recovery of GBP relative to EUR continued in October 2020 with EUR exchange rate being 1.1104 on end-October following the abrupt depreciation to 1.0846 in mid-September. Relative to the USD, both EUR and GBP performed well in the run-up to the US General Election on 3 November 2020. This most likely reflects an increase in political uncertainty in the US leading up to the election, which has since been partially resolved. As a result, there was a small depreciation of the USD vis-à-vis GBP from 1.2933 on 30 October 2020 to 1.325 on 10 November 2020 following the election. However, a further appreciation of the USD is likely when the existing political uncertainty is resolved in the near future. 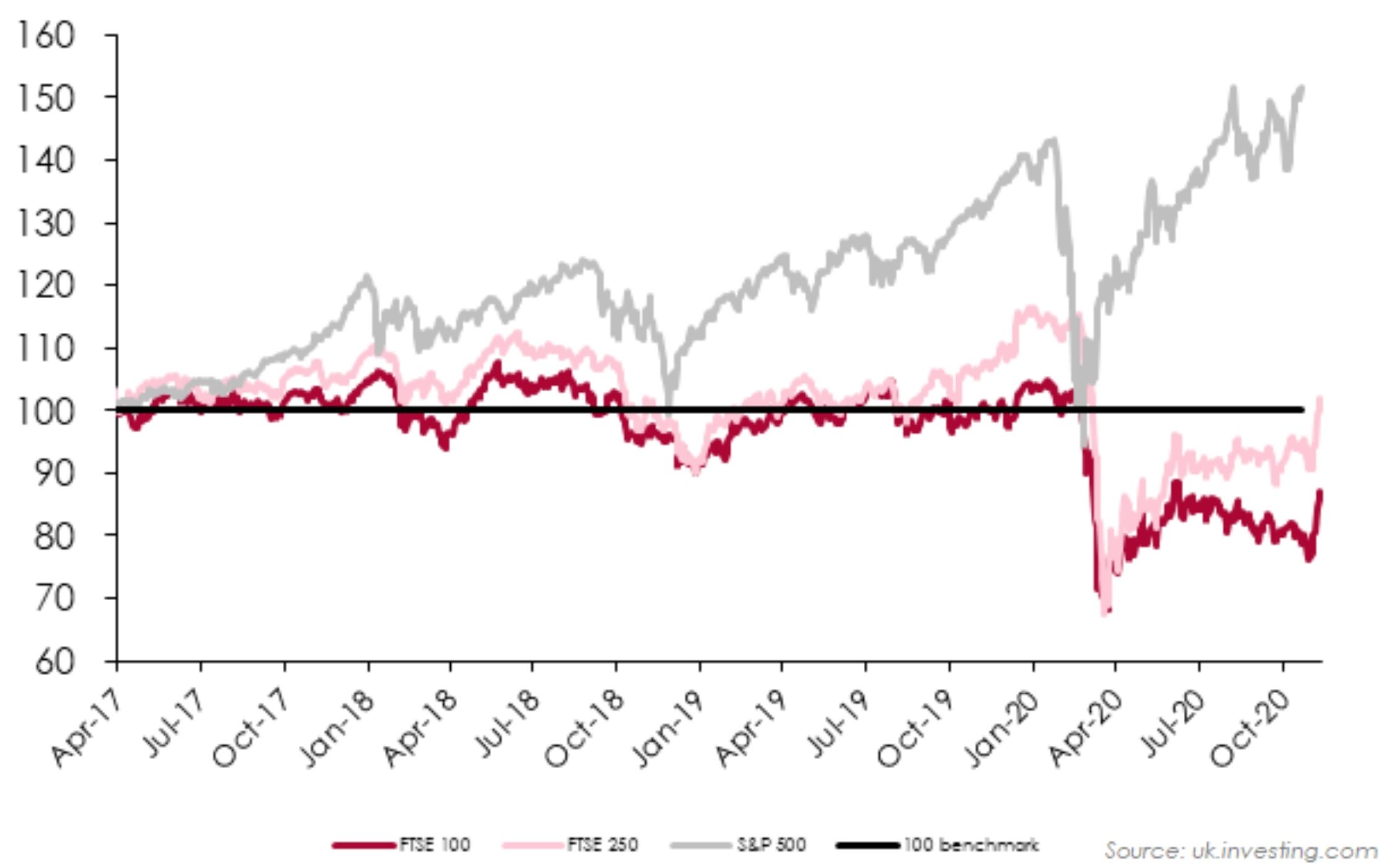 Through most of October 2020, all major stock markets fell slightly, reaching a low on the eve of the US Presidential Election on 3 November 2020. Shortly following this, however, the announcement of effective vaccines for SARS-Cov-2 (the pathogen that causes Covid-19) caused a spike in both the US and UK stock markets. These vaccines await regulatory approval and still face significant deployment challenges, but their development has boosted the stock market. Stock prices are likely to continue to rise in coming months, and if the vaccines prove viable this positive outlook will probably also be reflected in further stock market boosts.

Figure 5: Oil prices resume volatility after a period of relative stability amidst concerns over continued Coronavirus disruption primarily on the demand side

Despite maintaining some degree of volatility (ranging from $35.64 to $41.37 per barrel) in October 2020, the monthly average of oil price has remained relatively stable.  Supply is expected to continue to rise in the coming months with Libya planning to produce as much oil as possible whilst the demand outlook is very uncertain, in part due to the prospect of future waves of Covid-19. This means that the oil price could remain weak.

Figure 6: All PMIs fell substantially in October 2020, in particular for the Service Sector which has declined by almost 5 p.p. from September 2020

UK Services and Manufacturing Purchasing Managers’ Indices fell in October across all sectors but remained above to 50.0 mark. This indicates a slowdown of recovery but does not suggest a slip back into decline.

Construction PMI, which had been the only one to rise in September, decline by 3.7 p.p. from 56.8 to 53.1 in October. IHS Markit analysis indicates this is caused by supply chain bottlenecks for building materials driving up costs. Moreover, October marked the third consecutive decrease in civil engineering activity which reached an index of 36.4. Housing, however, remained the largest driver of construction growth with the index reaching 62.4 in October, followed by the Commercial Sector at 52.1.

The decline in Services PMI was even larger, almost reaching 5 p.p. from September, driven by decreasing demand in the hotels, restaurants and catering category and shortage of advanced bookings based on IHS Markit analysis. This slowing of growth reflects tighter restrictions owing to the pandemic and the rumour and then announcement of government-mandated closure of much of the hospitality sector. As these restrictions came into force in November, the outlook for the UK Services sector is particularly negative for the coming month. Service PMIs fell below their January 2020 levels again in October 2020.

Meanwhile, Manufacturing PMI declined from 54.1 in September as the rate of growth dipped slightly. Although there had been higher demand from customers within and outside the UK (including the US and China), the boost is now receding amid the UK lockdown and job cuts increasing. IHS Markit analysis indicates that intermediate and investment goods sector had seen production increases while consumer goods sector decreased.

Both the YouGov/Cebr and the GfK Consumer Confidence Index had declined in October vis-à-vis September. YouGov/Cebr analysis highlighted that the decrease is driven by concerns over household finances (6.1% dip to 86 points) and property value (3.6% decrease to 104.1 points) amid further Covid-19 restrictions.

The GfK Consumer Confidence Index had reached -31 points in October 2020, marking a decline from -25 in September and the lowest reading since May due to uncertainty over personal finances and the UK economy.