Figure 1: The number of vacancies increased by 8.0% in April 2021 from the last quarter while Unemployment dropped slightly to 4.8% in quarter ending March 2021 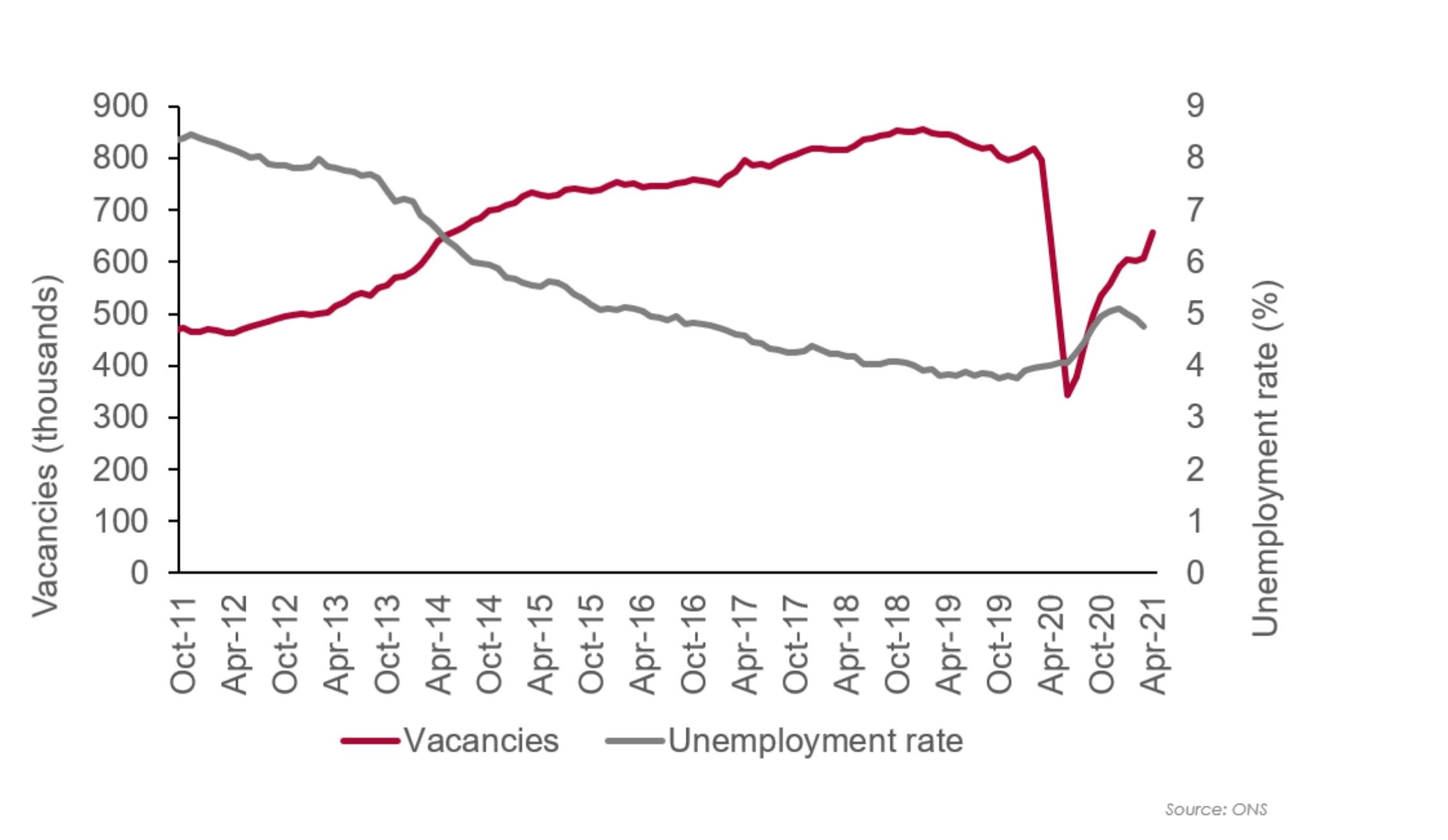 The unemployment rate fell slightly from 4.9% in the quarter to February 2021 to 4.8% in the quarter to March 2021. Whilst vacancies increased on the quarter, in particular within the accommodation and food service sectors, they still remain below pre-pandemic levels by 772,000 jobs. The latest figures continue to point towards a slow recovery.

The ONS highlighted that young people have been hit hardest during the pandemic. Over the last quarter, the drop in both employment and unemployment rates for those aged 16-24 can be attributed to people remaining in education rather than heading into the world of work. The continued roll out of the vaccine, particularly for the younger part of the population, means there is cause for a positive outlook. However, the end of the furlough scheme is in the near future, which will impact unemployment.

CPI inched up from 0.7% in the 12 months to March 2021 to 1.5% to April 2021. This was predominantly driven by increases in housing and household services (0.33 p.p. relative to March) as well as clothing and footwear (0.22 p.p.). It was slightly offset by a decline in the price of recreation and culture (0.18 p.p.). Both figures likely reflect that the 12 months to April entirely occurs during the Covid-19 outbreak, meaning the 12-month rate is relative to a level within the pandemic. The increase in housing and household services was driven by rising utility costs while the rise in clothing and footwear prices was caused by the decrease in discounted items and the arrival of new season items.

PPI, meanwhile, continued its rise from 2.3% in the year to March 2021 to 3.9% to April 2021. Transport Equipment (1.82 p.p. 12-month growth rate) and Metal, Machinery, and Equipment (1.04 p.p.) made the largest contributions to the increase. It marked the highest Producer Price Inflation since October 2018 which preceded the beginning of the pandemic, partially due to comparatives to the relatively low price base at the start of Covid-19.

Figure 3: GBP increased slightly against USD and EUR in the month of May 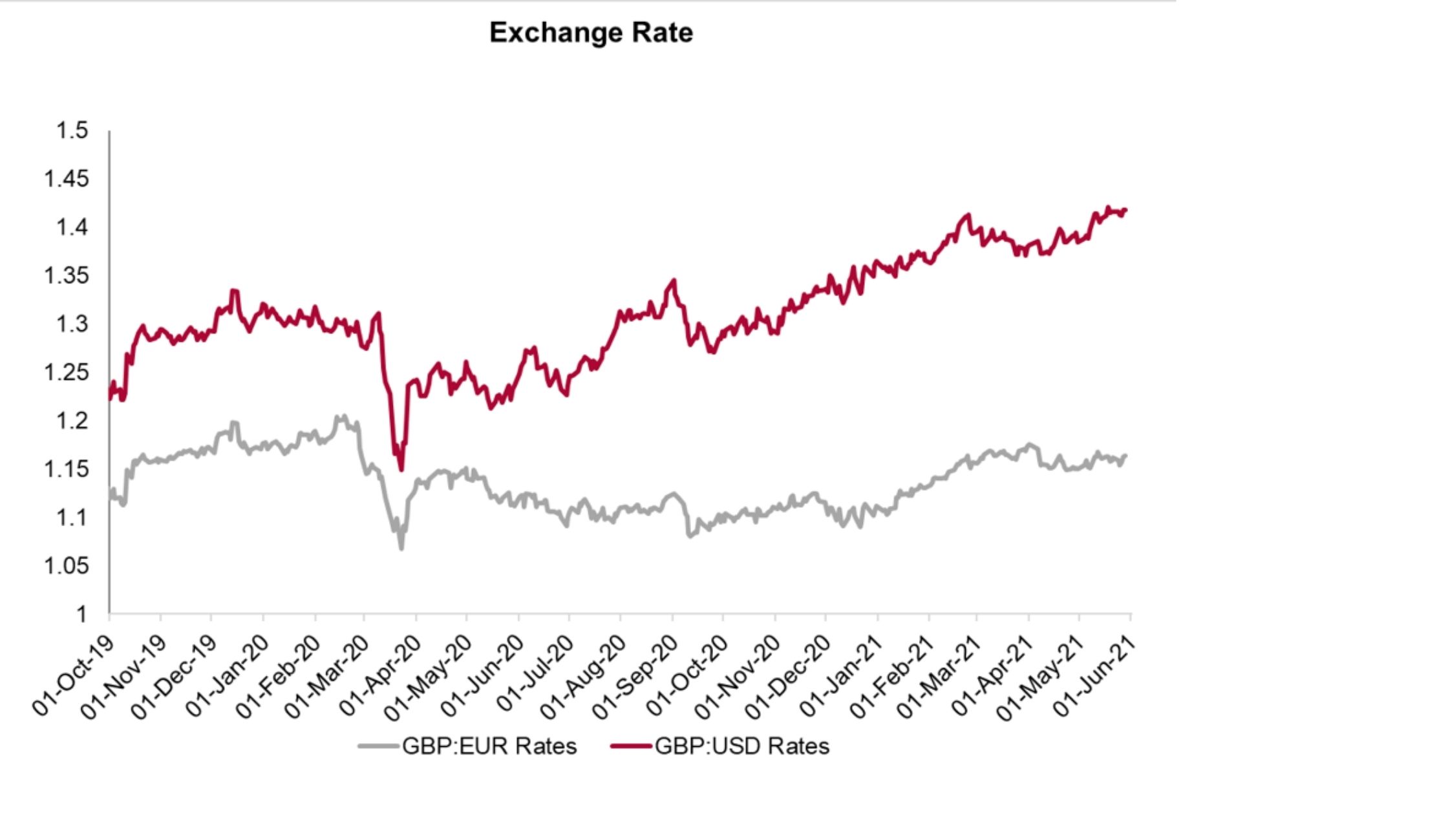 GBP continues growth at a slow and steady pace against EUR and USD, flattening off towards the end of May 2021. In May, the Bank of England announced cuts to the quantitative easing programme and increased their 2021 economic growth forecasts. Positive news around the vaccination rollout, the easing of lockdown restrictions and positive PMI trends is expected to support the GBP. However, GBP traders remain cautious, with the rising Delta variant threatening to hamper the government roadmap for June.

FTSE 100, FTSE 250, and S&P 500 indices stabilised in May compared to April with FTSE 100 maintaining its position above 7,000, similar to April. The growth at the start of May 2021 coincided with the rising optimism over the strongest economic recovery since World War II. The Bank of England has also its growth forecast from 5% as of February to 7.25%. However, Richard Hunter from interactive investor attributed the declines in mid-May to concerns over potential interest rate rises and inflation. Fears over inflation arose from supply chain issues, release of pent-up customer demand and comparatively low-cost comparison base in 2020.

Figure 5: Oil price stabilised throughout May 2021 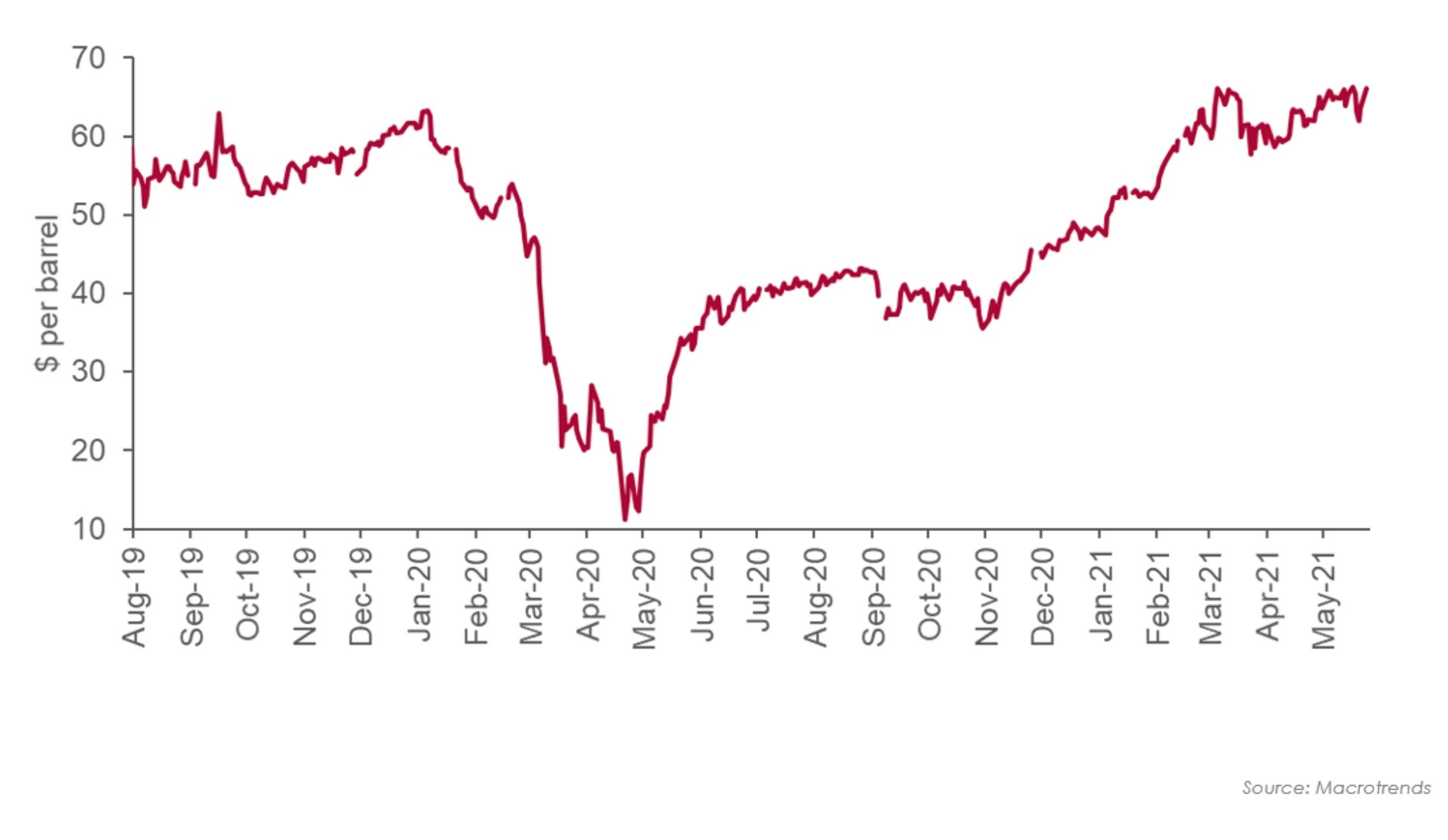 Oil prices have stabilised throughout the month of May at nearly $70 a barrel, with OPEC expected to continue gradually easing cuts in supply until July. The positive outlook on the global economy due to vaccine roll outs has increased the risk appetite of investors. However, Iran has been in discussion with global powers since April to reinstate the nuclear deals. The prospect of Iranian oil becoming available on the market has capped the gains.

Services and Manufacturing Purchasing Manager’s Indices saw further increases in April 2021 while Construction decreased slightly. However, each index remains above the crucial 50 point mark, indicating sector growth and continuing this trend for the second consecutive month.

Services PMI rose from 56.3 in March to 61.0 in April, representing the fastest increase in output since October 2013. The index was the highest since August and IHS Markit attributed this to the rise in business and consumer spending, in line with the loosening of lockdown and optimism over economic recovery. General optimism was accompanied by job growth in the sector reaching the highest level since 2016. Concerns remain, however, due to the sharp increase in PPI mentioned earlier and subdued export sales due to travel restrictions.

Manufacturing PMI continued its growth from 58.9 to 60.9, a 321-month high. It comes on top of a sustained period of growth in production and sales for the Manufacturing sector, which is again linked to the easing of Covid-19 restrictions, higher demand and increasing work backlogs. However, supply chain disruption and input shortages caused higher purchase costs and sales price inflation.

Finally, Construction PMI saw a slight dip from 61.7 to 61.6. It marked the third consecutive month during which the PMI was over 50 points. All major sectors of Construction saw growth with Commercial Work leading the way and Civil Engineering growing at its quickest rate since September 2014 linked to contract wins from HS2 and Highways England. Similar to the other two sectors, the Construction sector cited concerns inflation because of demand and supply imbalances and Brexit-related delays.

Figure 7: Consumer Confidence continued its positive recovery from April to May 2021 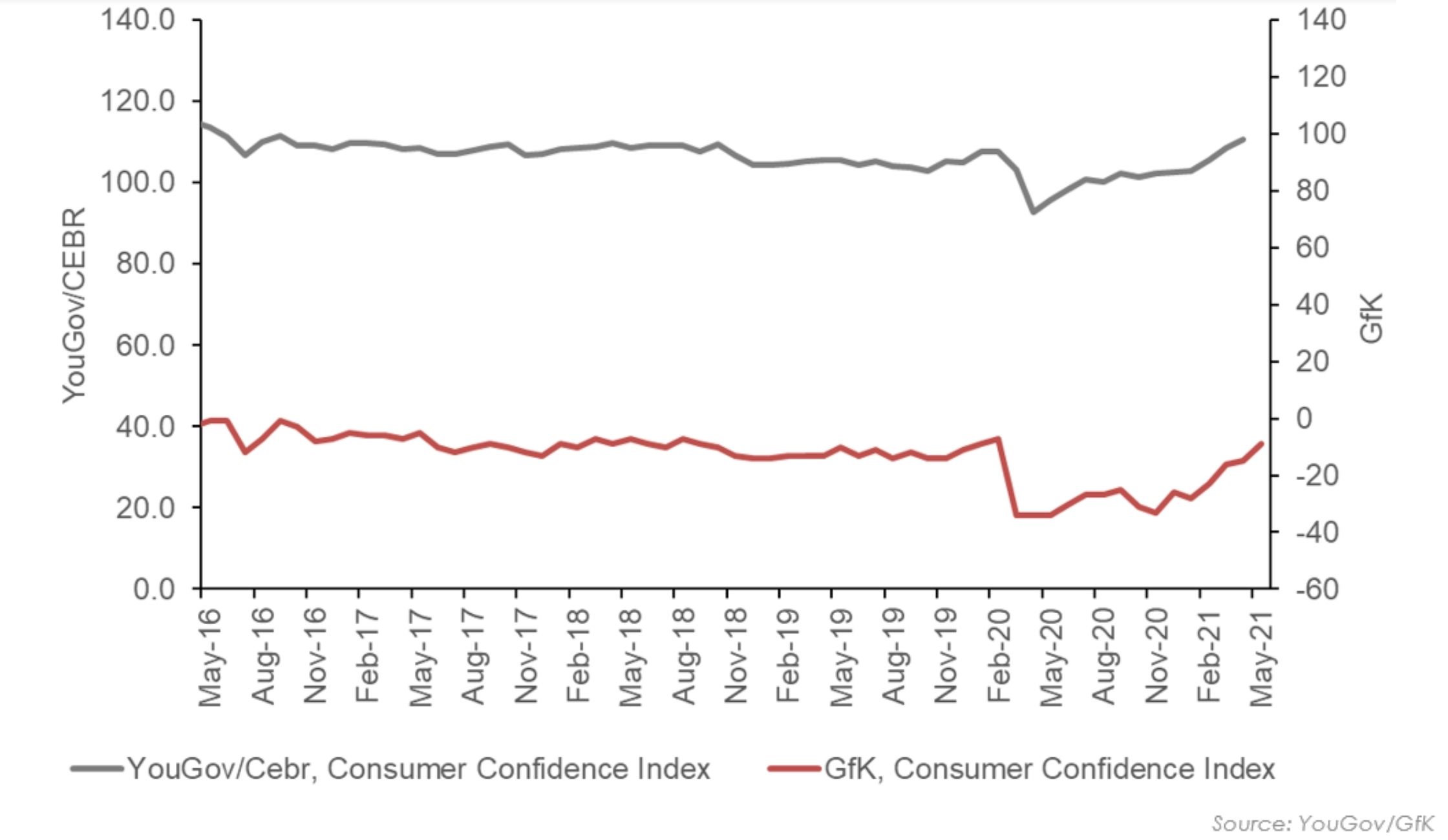 The YouGov/Cebr Consumer Confidence Index increased from 108.5 in March to 110.5 in April 2021. According to YouGov/Cebr analysis, the continued increase was a result of the projected highest economic growth in more than 70 years due to optimism over house prices and personal finances.

The GfK Consumer Confidence Index increased from -16 in March and -15 in April, to -9 in May, primarily driven by improvements in the perceptions of the general economic situation over the past 12 months and the next 12 months. GfK attributed the large improvement to consumers taking up the opportunity to spend ‘accidental savings’ now that the economy is beginning to open up and vaccination roll-out has been successful thus far.