Figure 1: Vacancies continued to rise in January 2021, but Unemployment rate hovered around 5.0% in quarter ending January 2021 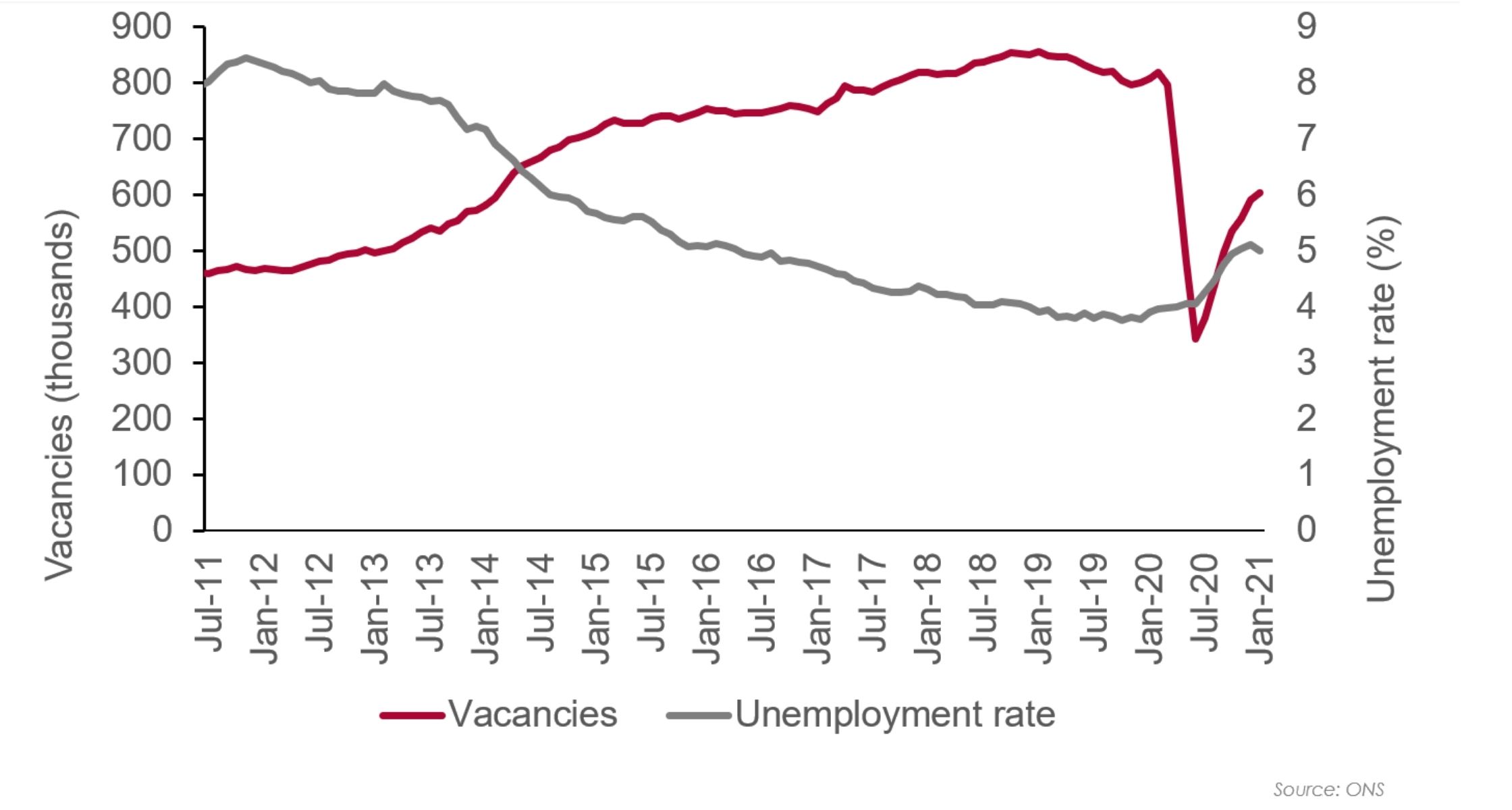 After a substantial increase in previous months, the unemployment rate fell slightly from 5.1% in the quarter to December 2020 to 5.0% in the quarter to January 2021. Vacancies, meanwhile, continued to increase driven predominantly by new vacancies in Healthcare as well as Public Administration and Defence. Around 14,000 more vacancies (2.4%) were posted in quarter ending in January relative to the quarter ending in December. The rate of increase, however, slowed relative to previous months due to a decrease in vacancies in the service sector. The vaccine roll-out, successful to this point, gives a positive outlook for Vacancies. Moreover, the withdrawal of restrictions in coming months should also see Vacancies returning near pre-pandemic levels. Unemployment, meanwhile, may spike when the furlough scheme is ultimately ended, beginning with a taper in July 2021.

Figure 2: Inflation remained in the positive territory in February 2021, albeit with CPI rising at a slower rate

PPI increased to 0.9% in the year to February, from 0.1% in January. The ONS attributed this growth largely to food products, metals and non-metallic minerals contributing the most to the increase. Food products contributed the highest increase at 0.44 percentage points out of the 10 buckets used to measure PPI.

CPI rose by 0.4% in the 12 months to February, down from 0.7% to January. The highest contributor of the increase is transport (including motor fuels) at 0.30 pp with housing and household services also adding to the increase. However, a drop in the prices of clothing, second-hand cars and games, toys and hobbies partially offset the increases highlighted above. The ONS identified 69 items across the basket of goods and services used to measure CPI that were not available to consumers, largely due to the current COVID-19 restrictions.

Despite the small increases in both indices, it seems unlikely that either PPI or CPI will near their target in the coming months. Decreased labour market tightness combined with monetary conditions that are already highly expansionary suggest that inflation will remain below 2% in the near term. However, if oil prices continue to rise, inflationary pressure could increase.

Figure 3: GBP continued its appreciation against EUR and stabilised against USD 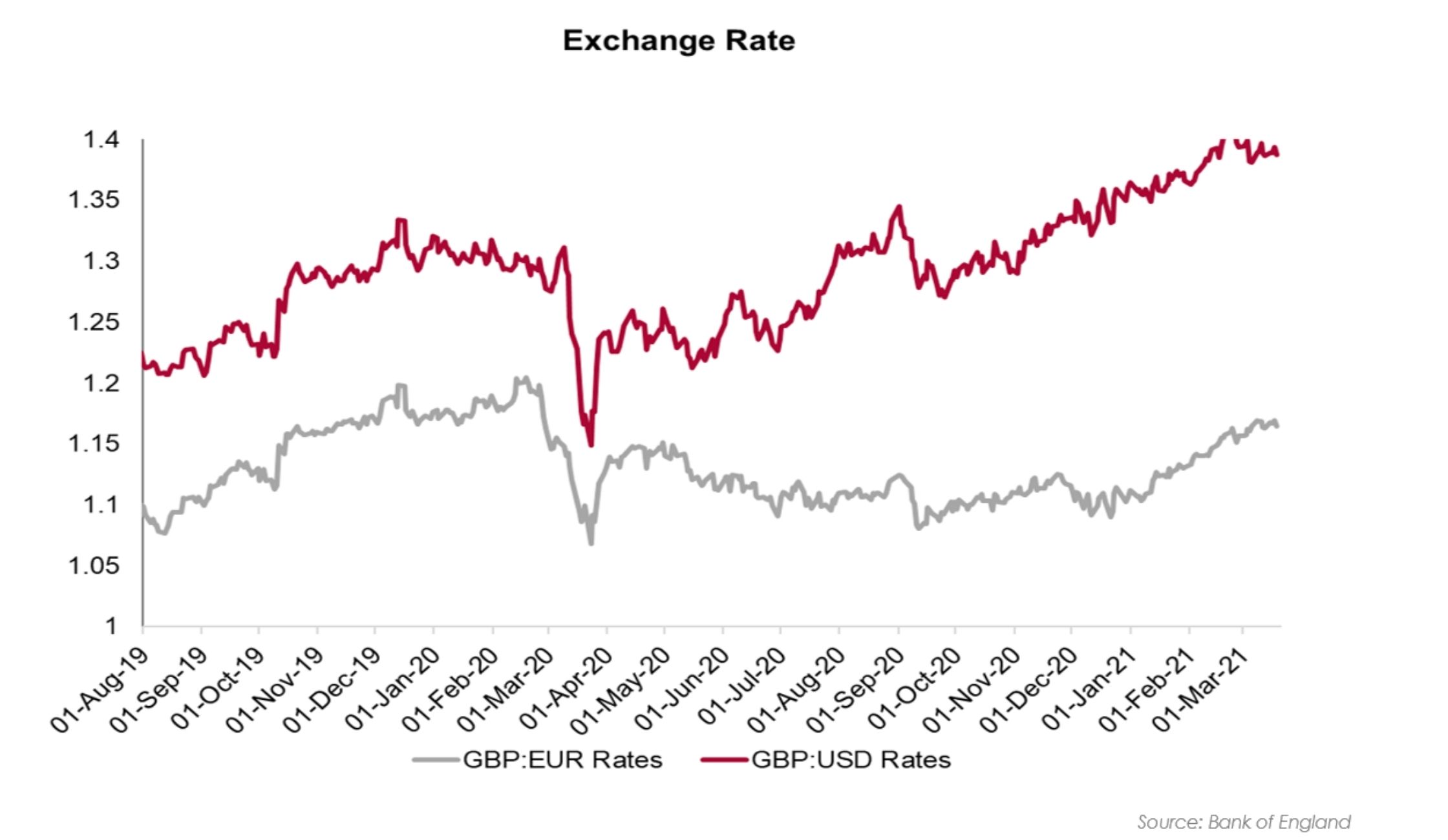 GBP continued its steady rise against EUR and USD during March, likely due to market optimism about the UK’s vaccination programme. In particular, GBP remains above pre-pandemic levels relative to the USD, though the rate of appreciation slowed slightly, reaching 1.3939 USD to GBP on 17 March 2021. Likewise, the recent appreciation could be attributed to the lessening of Brexit uncertainty or the beginning of Covid recovery, both of which saw investors move away from GBP towards assets perceived to be safer.

Figure 4: FTSE 100 and S&P 500 continued their slow upward trajectory in March after drops in February; FTSE 250 increased although the existing level remained below pre-Covid level

FTSE 100 and S&P 500 both continued their slow upward trajectory in March after drops in the second half of February due to concerns over inflation. S&P 500 reached a peak on 17th March, falling slightly in the following week. FTSE 250 index increased although the existing level remained below pre-pandemic levels. Given promising news on the vaccine roll-out within the UK, this is probably reflective of its international exposure. 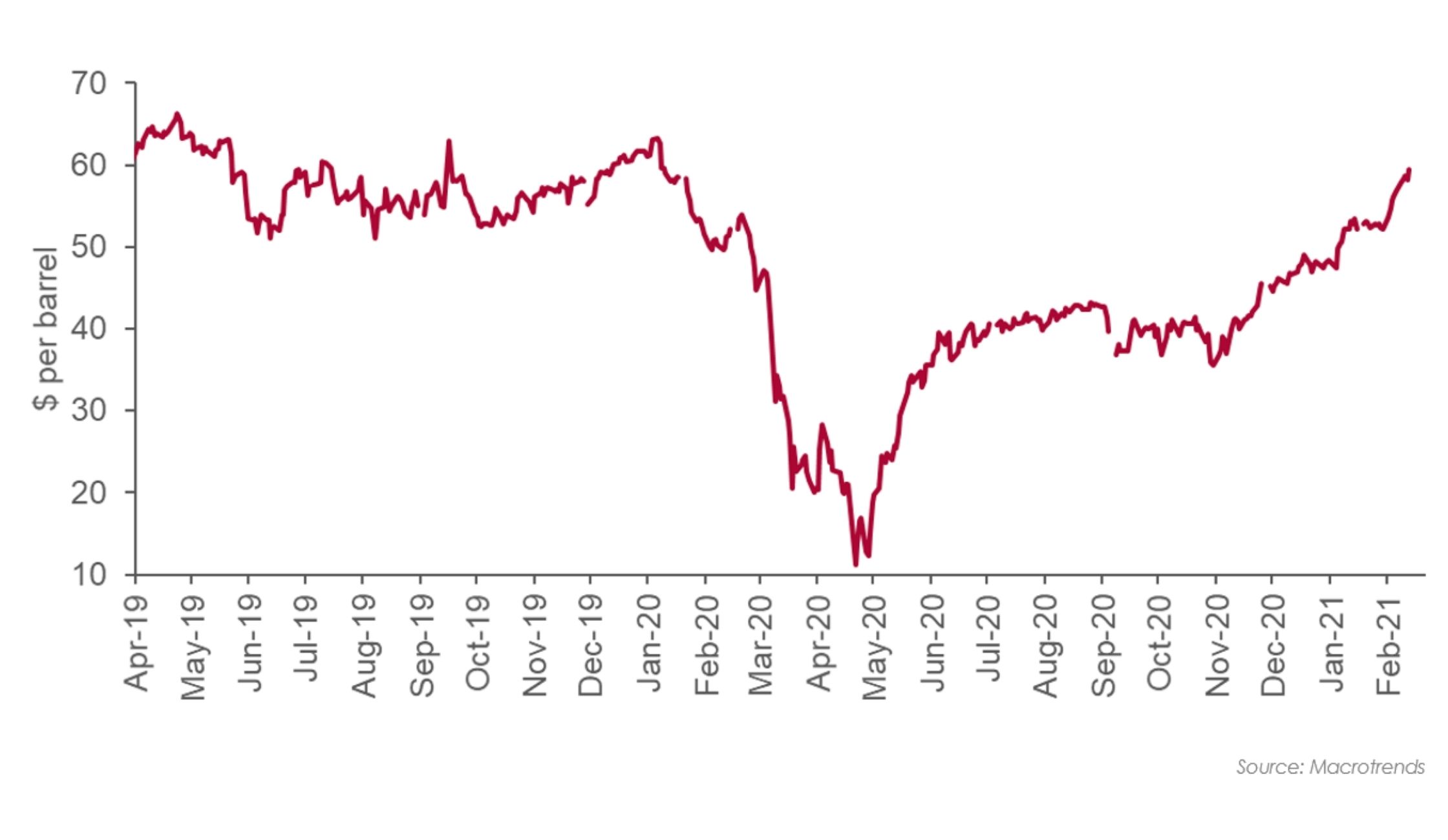 The oil price increased dramatically during February and March, crossing $65 per barrel in the middle of March. This surge was attributed to a frigid spell in the US, affecting both supply (from American oil wells) and demand (from US consumers). Moreover, oil prices are further boosted by optimism over the possibility of quick economic recovery with the vaccine roll-out. Oil exporting nations, in particular Saudi Arabia, have also reduced oil production since April 2020, further increasing prices.

Future increases in the oil price can be expected because the Suez Canal, a major thoroughfare for the world’s supply of oil and oil derivatives, is blocked by a tanker. Once the issue is resolved, a backlog of multiple days is expected, limited oil distribution not only now but also in the future.

Figure 6: Construction, Services and Manufacturing PMIs all increased in February 2021 although Services remained in the negative territory

Construction, services and manufacturing purchasing manager’s Indicines all rose in February, with only service below 50, which indicates a decline.

Services PMI rose to 49.5 in February after a sharp decline to 39.5 in January. Nation-wide lockdown post-Christmas has continued to stunt activity, but there were elements of growth in technology and business services. The continued successful vaccine rollout has created renewed confidence in the future lifting of business and trade restrictions. Despite this, Services PMI remains slightly below the crucial 50-point mark, indicating that the sector is still in decline.

Finally, construction PMI saw a return to growth at 53.3 in in February, a bounce back from 49.2 in January. The index has exceeded the 50 no-change mark for 8 of the previous 9 months. Residential work continued as the strongest growth area in February. However, strained global supply chains as well as increased shipping and raw materials costs added to the already rising costs in the industry.

Figure 7: Consumer Confidence continued its recovery in February and March 2021 although it still remained below pre-Covid level 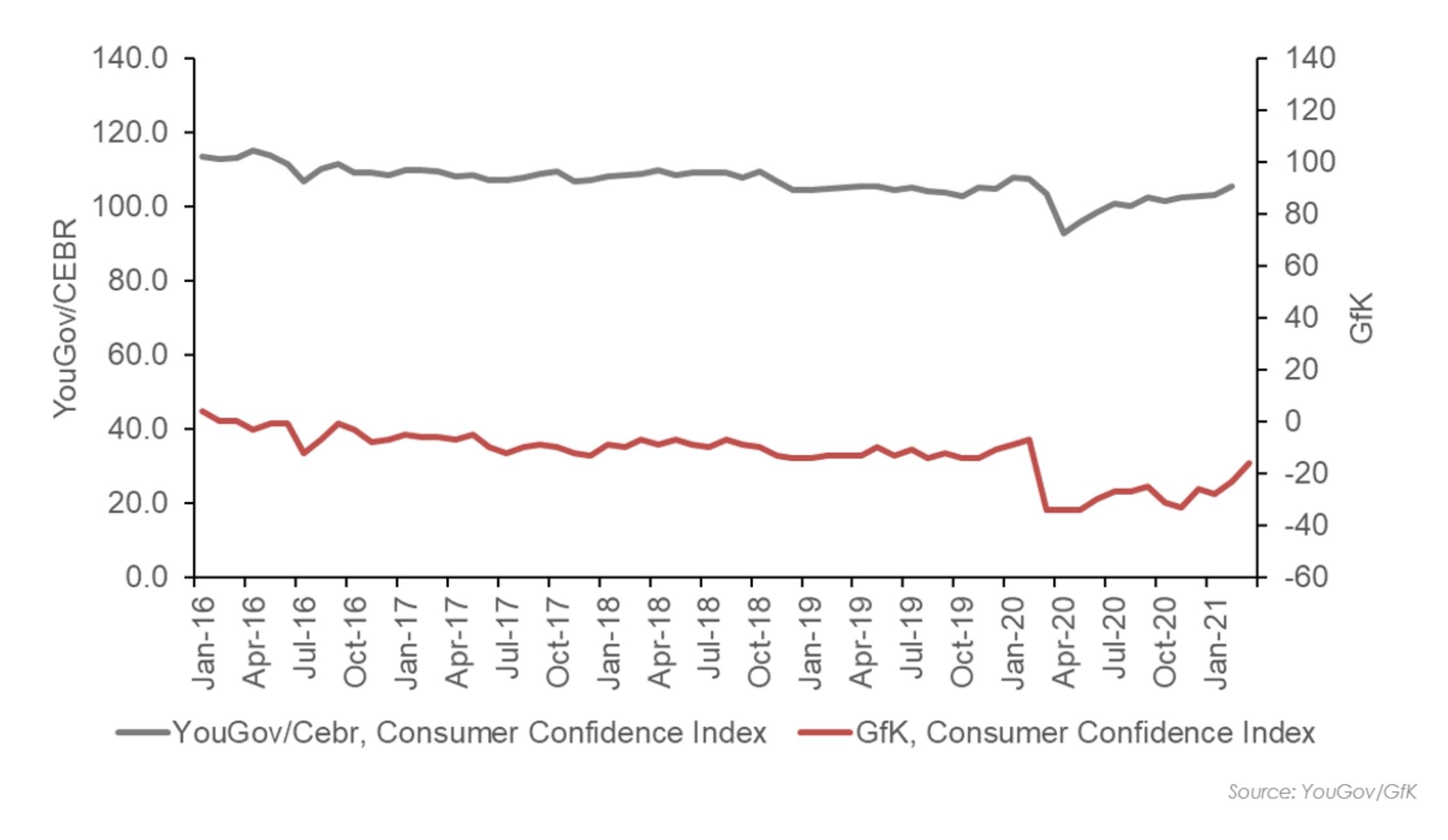 The YouGov/Cebr Consumer Confidence Index increased to 105.4 in February 2021, continuing its recovery from a low of 92.7 in April 2020. YouGov/Cebr analysis highlighted that the increase from 102.9 in January 2021 is driven by increased confidence over household finances, job security and business activity although house owners reported a decrease in their house values over the past 30 days.

The GfK Consumer Confidence Index increased from -28 in January 2021 to -16 in March 2021 which represents the largest increase for one year. Gfk attributed the increase to improvements in customer confidence, as measured by perceptions over personal financial situation, general economic situation and purchase and savings indices. Gfk also added that key drivers of the improvements include optimism over the Budget, successful vaccine roll-out and lockdown roadmap being released in late February.