It may come as something of a surprise that the first leader of the British Labour Party, Keir Hardie visited Cape Town, but in February 1908 he did. The city was the final stop on an around the world tour that had lasted no less than eight months.[1] Hardie’s journey took in Canada, Japan, New Zealand, Australia and finally South Africa. It may be that he was attempting to find a way of ending his passionate relationship with the campaigner for the suffrage and suffragette movement Sylvia Pankhurst, but Hardie took the opportunity to visit and get to know the labour and socialist parties across the Empire.

Hardie’s remarks in India, critical of British rule, were widely reported in the UK as well as South Africa. When he arrived in Durban on 11th February 1908, he faced a storm of controversy. Although Hardie attempted to re-assure the journalists who came to interview him in Durban that he was not in the country to stir up a revolution, he had little success. Hardie’s South African journey was dogged by bitter criticism and violent demonstrations, from which he was lucky to escape without serious injury.[2] In Pretoria a white mob, 3,000 strong effectively ran him out of town, singing ‘We’ll hang Keir Hardie from a sour apple tree’. From Pretoria Hardie went on to Cape Town, hoping for a better reception.

South Africa was perhaps the first foreign policy issue the emerging Labour Party adopted. Like European socialists, and a section of the British Liberal party, Keir Hardie and Ramsay MacDonald were ‘Pro-Boers’ during the war of 1899 – 1902. They saw the Afrikaners as yeoman-citizens resisting the Imperial might. “Try to imagine what the free Yeoman of England were like two hundred years ago and you have some idea of Boer life,” Hardie told his supporters in 1901. “Their Republican form of government bespeaks freedom…while their methods of production for use are much nearer our ideal than any form of exploitation for profit.”[3]

The Labour leaders knew and wrote to the former Boer Generals like Jan Smuts, a relationship that continued after the war. Hardie worked with and spoke alongside liberal South Africans like Cron Schreiner (husband of the author Olive Schreiner), who toured Britain speaking up for the Boer cause; often being heckled and sometimes being physically assaulted.

Cape Town at the turn of the century 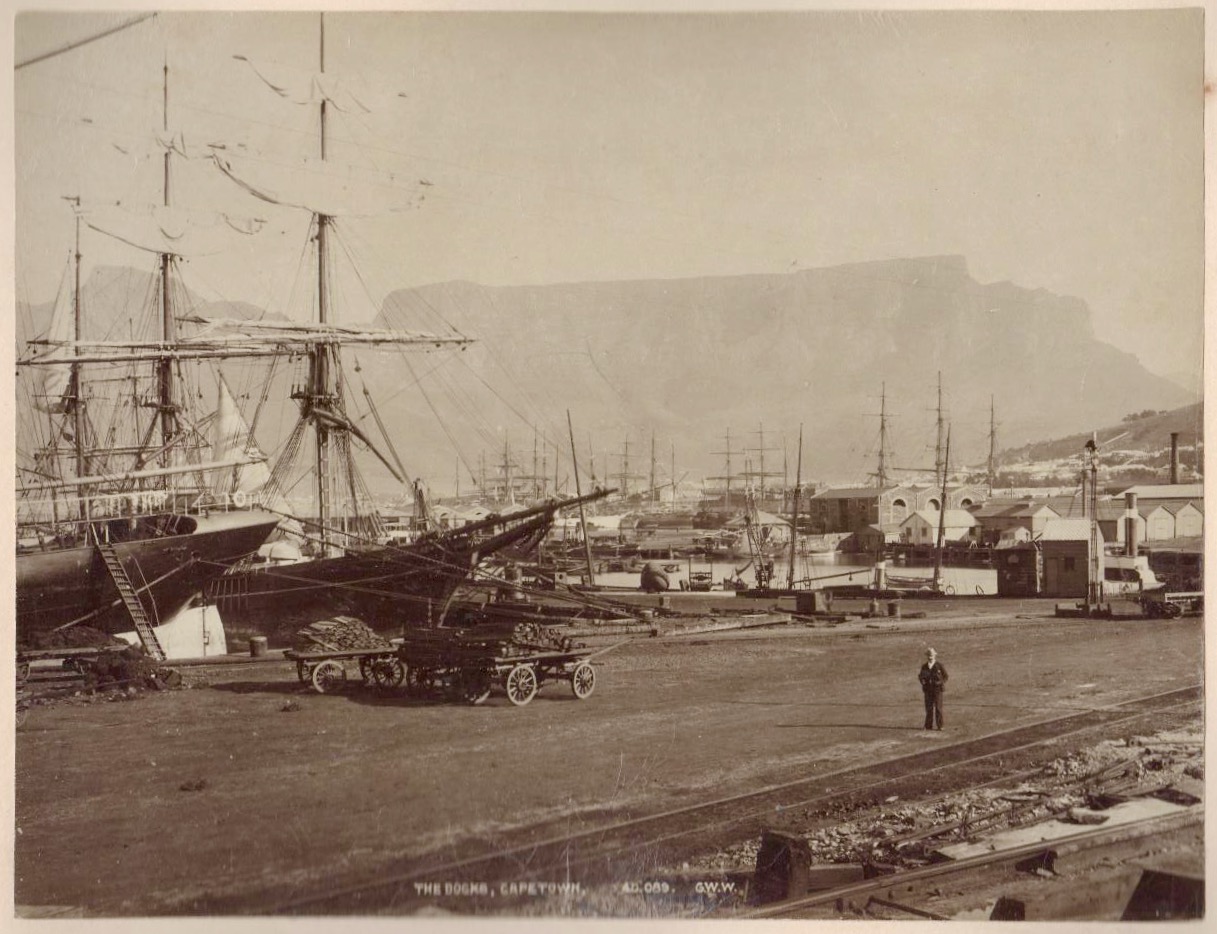 The city that Hardie arrived in February 1908 had recently experienced both boom and bust. Cape Town had been a re-supply point for European powers on the way to the East for centuries, but it had really come into its own during the Boer war. As the capital of the Cape Colony and one of the main ports through which supplies travelled to support the British war effort, the city prospered as never before. The harbour was bursting at the seams to cope with the influx. Capital investment doubled between 1899 and 1904, as did the number of workers in factories, reaching nearly 12,000 in 1904.[8]

By 1904, Cape Town had a population of 170,000. It had more than doubled in size in just thirteen years. The influx included 34,000 European immigrants; mainly British, but including around 9,000 East European Jews. The city was predominantly a white, English speaking town, but it was also home to 21,000 ‘Coloured’ or mixed-race people, 9,000 black Africans, 2,000 Indians, and a small black community from outside South Africa.[9]

Cape Town had had a long history of militancy. White workers, whose numbers had been reinforced during the Boer war, were mainly organised as extensions of British unions. It was in December 1881 that the British Trade Union of Carpenters and Joiners established its first South African branch in Cape Town.[11] Nor was it alone. The Amalgamated Society of Boilermakers had ten branches in South Africa, which remitted £1,000 a year to its London based executive council.[12] Some unions exclusively organised white workers, but others did not. The tailors’ union, for example, could not have survived if it had excluded the Malay community, whose forebears had arrived from the Dutch East Indies as slaves or political prisoners. They were well established in the industry and could not be excluded. This did not prevent some white members complaining that they were being undercut by Malays and ‘Polish Jews’ who were ‘living cheaper’, and working longer hours for very little money.[13]

A range of left-wing parties flourished in Cape Town in the first decade of the twentieth century.[16] The trade union movement, together with the immigrant community and the Cape’s educated Malay and Coloured populations, allowed a diverse range of parties to flourish, challenging the prevailing racism of the age.

Among these parties was the Social Democratic Federation, which was founded on May Day in 1904. Initially linked to the British movement of the same name, it soon lost these ties. It was led by Wilfred Harrison, a British soldier who had been demoted for fraternizing with Afrikaner prisoners during the Boer War. He was a carpenter, trade unionist and skilled organiser. The Federation ran its own newspaper, Cape Socialist, and built an impressive meeting place, predictably called the ‘Socialist Hall’, which held up to 600 people. 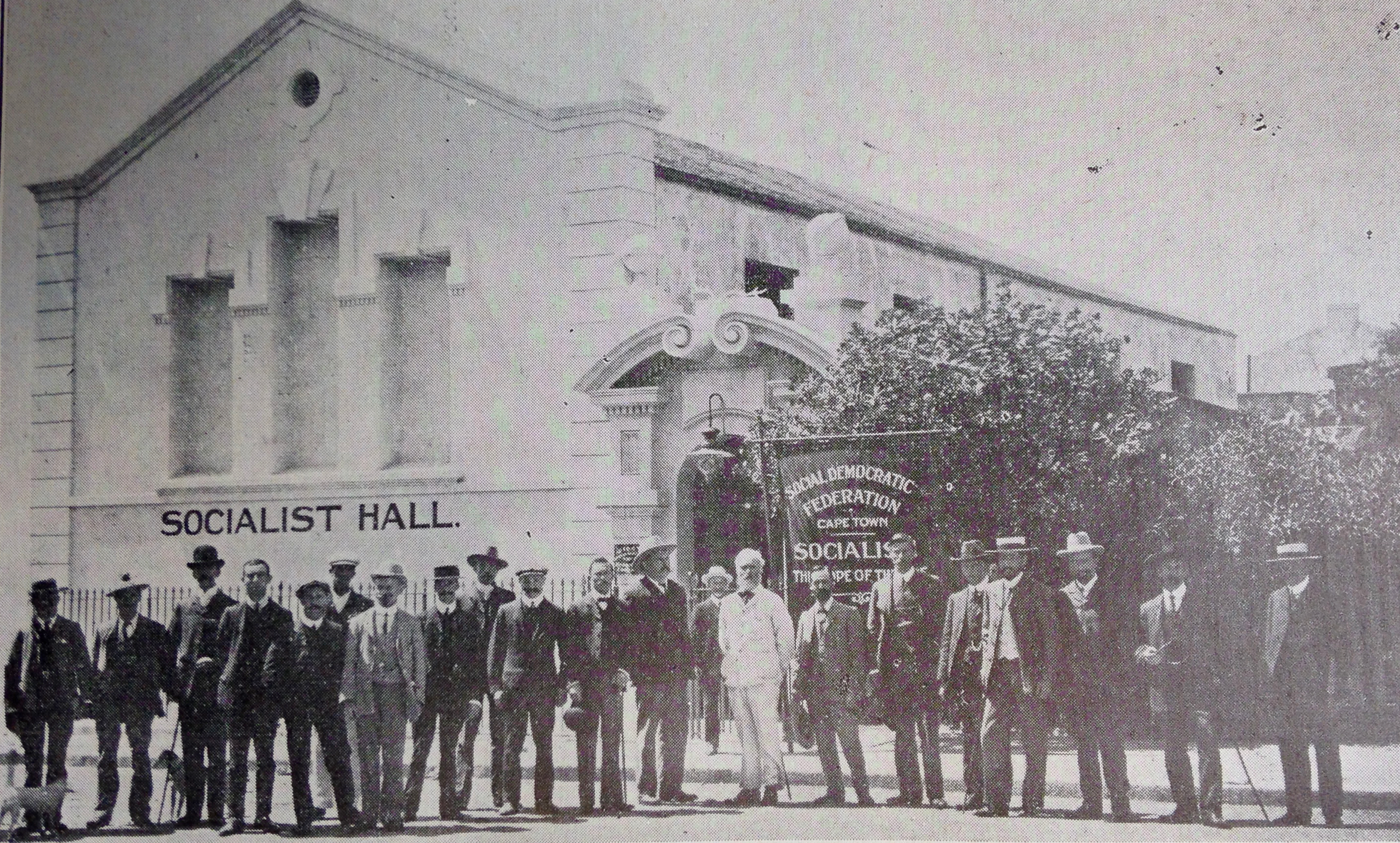 Hardie must have looked forward to his arrival in Cape Town. Not only was it the final stop on his very long journey, but he was also assured of a warm welcome. The city also was considerably more progressive than the rest of the country. Despite this, his arrival caused yet another controversy. The Trades and Labour Council and the Labour Representation Committee, almost certainly aware of the trouble his views had caused at his previous meetings, decided they would not host his visit.

It was left to the Social Democratic Federation to rise to the challenge. Its leader, W. H. Harrison, wrote to the Cape Argus, expressing his disgust:

It is not altogether surprising though pitiably nauseating, to find that semi-capitalist mixture, styled the ‘Labour Representation Committee’ passing a resolution refusing to participate in the reception of Keir Hardie. Such an insult to one of Labour’s greatest leaders adds to the chagrin of such bodies in the eyes of true sympathisers.[18]

An alternative meeting was arranged at the Social Democrat’s Socialist Hall.  It must have come as a considerable relief to Hardie that he received a warm welcome. But the meeting was not the main event of the visit, so after a rousing chorus of the traditional Welsh song, ‘Men of Harlech’, Hardie spoke for just fifteen minutes, promising he would give a fuller talk the Sunday, 1st of March. Hardie was as good as his word. On the Sunday, at the more spacious Good Hope Hall, he spoke to a “large” crowd, which had packed in.[19] This time they were not all socialists, but although at the beginning… “a small hostile element made its presence known, the assemblage was well disposed towards the speaker, and gave him a cordial reception.”

Hardie used his Good Hope Hall speech to appeal to the self-interest of white workers; urging them to make common cause with their black brothers, as the Cape Times reported:

Now, Socialism stood for the rights of humanity as human beings, and if the white working people of South Africa countenanced the exploitation of the coloured races, then they (the white workers) themselves must expect to be exploited. Freedom could not be limited by geographical lines or racial lines, and the time would come when unless something were done speedily in South Africa, they would find the coloured man ousting them from their places; because he was a cheaper worker than the white man. Let a strike take place, and they would find then where the blacklegs were drawn from… I don’t want to see, and I shall not be silent and stand by, and see our white civilisation dragged down by the capitalist class employing coloured labour for the purpose. (Cheers)[20]

He concluded with a theme that was commonly held among British liberals at the time – that although black and white were not yet equal, both had an equal right to receive the human rights that they were due.

And so the Socialist movement stands flat-footed for equal rights for every race. We do not say all races are equal; no one dreams of doing that, but I do say most emphatically that the coloured man, the native of South Africa, within his own civilisation, has as much right to have his freedom respected as any have within our civilisation. We stand, I say, for equal rights. (Cheers)

Keir Hardie’s time at the Cape was at an end. He returned to Britain in April 1908 and was given a tremendous reception and a great public meeting organised at the Albert Hall by the Labour Party.[21] Hardie later explained in the Labour Leader what he had learnt in South Africa. Certainly, he believed the Cape’s property-qualified, but non-racial franchise, might provide a model for the democratisation of Britain’s other South African colonies. In his reflections on his southern African stay, he wrote:

Is [‘the native’] to be recognised as a human being and allowed to vote and own property, or is he to be treated as being part wild beast and part child? Shall the Cape take from the natives the rights they possess or shall Natal, Orangia [sic. the Orange River Colony] and Transvaal adopt the Cape Standard?[22]

There was no doubt where he stood on this issue and Hardie remained engaged with the rights of black South Africans in the years ahead.

Keir Hardie returned to Britain a changed man. He had experienced the racism and the venom of the white working class in Natal and the Transvaal at first hand. The Union Jack that he seized as he fled from the hall in Johannesburg, remained on display at his flat in Nevills Court as a proud souvenir.[23] No longer would he refer to the Afrikaners in the terms he had used in 1900. Hardie’s South African visit had opened his eyes to the harsh realities of white racism and made him much more sympathetic to the plight of the black majority. Many years later the Labour Party would be a bastion of the Anti-Apartheid movement, led by the left wing MP Bob Hughes (now Lord Hughes). But Keir Hardie had laid the foundations for this relationship.

Martin Plaut is a South African/British journalist and historian, who worked for the BBC World Service for 27 years. He is currently Senior Research Fellow at the Institute of Commonwealth Studies.

[9] Lucien van der Walt, Anarchism and syndicalism in an African port city: the

[10] Worden, Nigel. ‘Artisan Conflicts in a Colonial Context: The Cape Town Blacksmith Strike of 1752’. Labor History 46, no. 2 (2005): 155–84. Nicole Ulrich, Counter Power and Colonial Rule in the Eighteenth-Century Cape of Good Hope: Belongings and Protest of the Labouring Poor, PhD Thesis, University of the Witwatersrand, 2011

[12] Andrew Thompson, The Empire Strikes Back? The impact of Imperialism on Britain from the mid-nineteenth century, Pearson Education, Harlow, 2005, p. 69

[14] The Stone was, in reality, a series of stones, more or less in a circle, with the largest one used to stand on to address the crowd. Vivian Bickford-Smith, Elizabeth van Heyningen and Nigel Worden, op. cit. p. 27

[23] Kenneth O. Morgan, Keir Hardie: Radical and Socialist, p. 197. There is a photograph of Hardie’s study in the National Library of Scotland which shows the Union Jack.

[24] There are a number of letters between Smuts and Ramsay MacDonald in the National Archive at Kew. PRO 30/69/1203 I

[28] The South African Labour Party, a member of the Second International, opposed the war, passing resolutions against it in December 1914 and January 1915, although many of its branches took the opposite view and it supported the war in Parliament. See Hew Strachan, The First World War in Africa, Oxford University Press, Oxford, 2004, p. 61-62