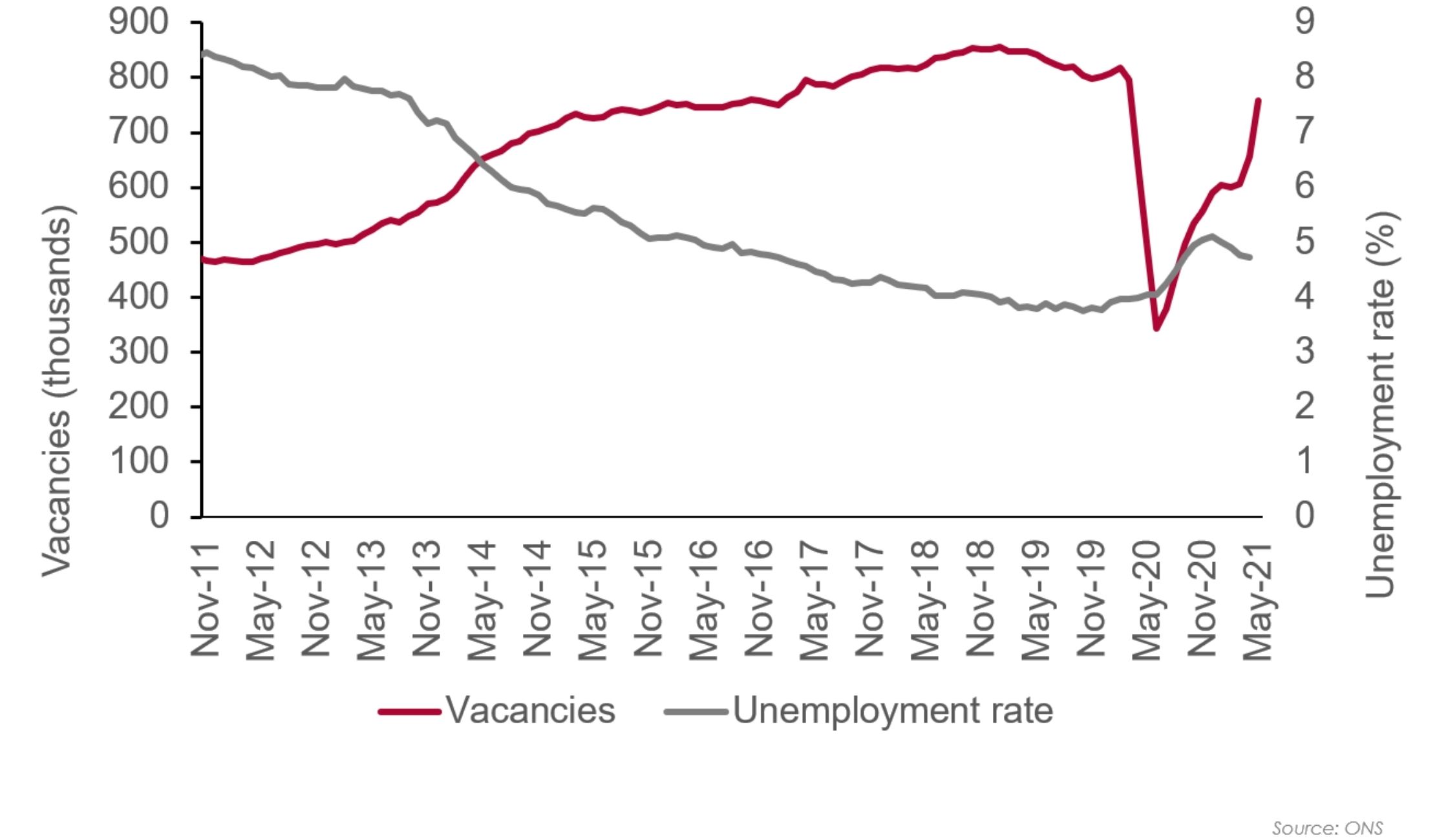 There is recovery in many sectors, mostly within the accommodation and food services industry which has benefitted from the easing of social restrictions across the country. Overall, the positive trend is continuing in labour market as business confidence in the economy drives a rise in recruitment. However, it is important to note the impact of a smaller pool of workers due to Brexit which may have a further impact on sectors such as health, social care and hospitality.

Figure 2: Both PPI and CPI continued to rise, with CPI crossing the 2% target for the first time since July 2019

CPI increased by a higher rate in May than in April, increasing from 1.5% to 2.1%. This marks the first time inflation has been above the 2% target since July 2019. The price increases were driven by a combination of fuel prices, clothing, recreational goods and hospitality. Food and non-alcoholic beverages partially offset this effect since their prices decreased relative to this time last year. It should be noted that these figures are with respect to the prior year so they are shaped by the impact of the pandemic.

Figure 3: GBP slipped against USD but remained relatively stable against EUR in the month of June 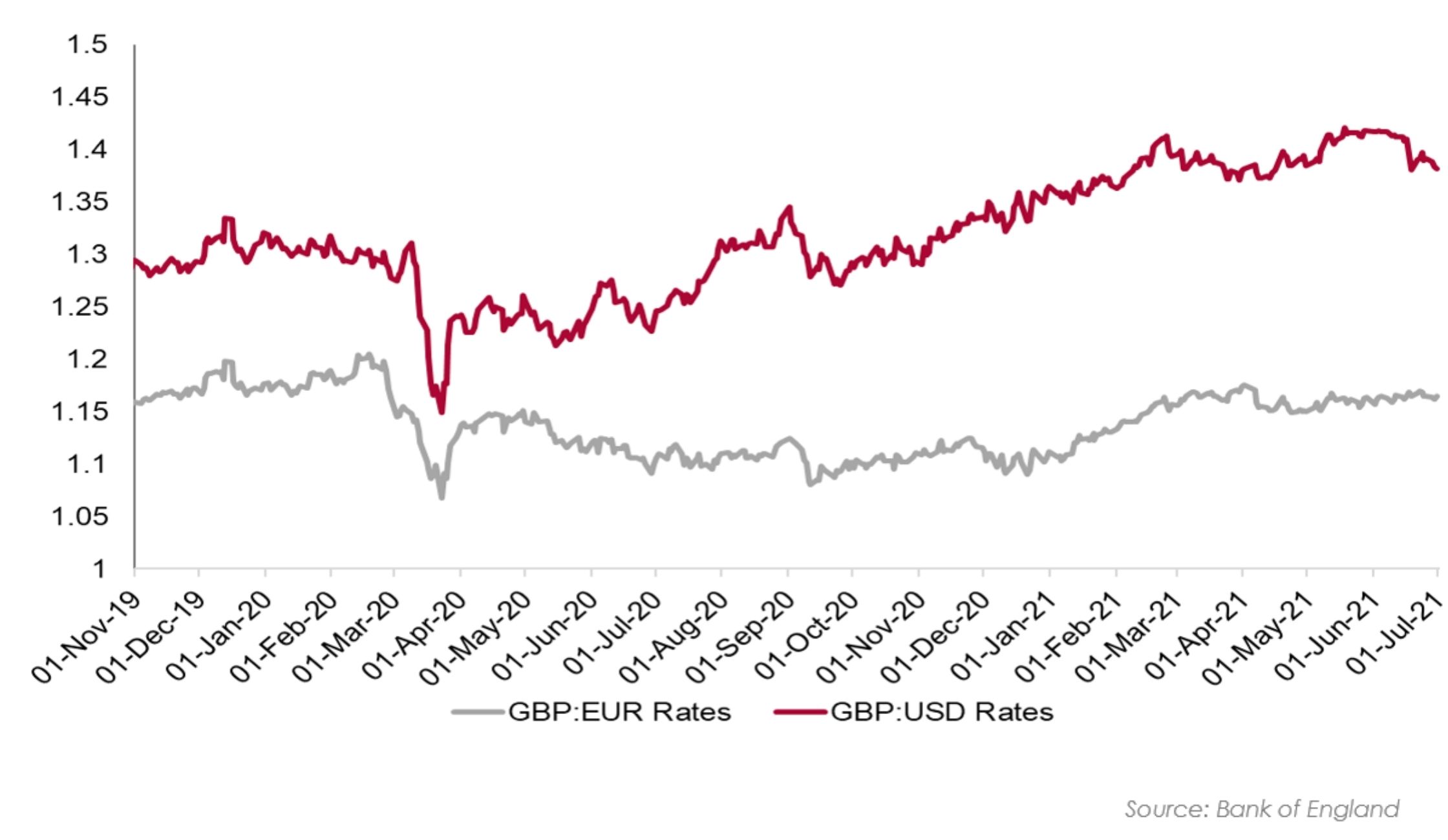 The GBP/EUR exchange rate has remained relatively stable, while the pound slipped to 1.38 against the dollar at the end June as the UK contends with inflation pressures due to Covid-fuelled supply chain problems. According to poundsteringlive, the move by the US Federal Reserve to move forward its first rate rise to 2023 had also caused the USD to appreciate. Bank of England governor Andrew Bailey warned traders not to over-react to the recent inflation jump. However, there is a continued recovery in the economy throughout June as hiring increases and the lockdown easing continues.

Figure 4: FTSE 100 and FTSE 250 remained stable throughout May. The S&P 500 increased amid higher market optimism due to the vaccination roll-out and re-openings.

As in May 2021, the FTSE 100 and FTSE 250 remained relatively stable in June 2021, a continuation of the trend seen in May. In the US, meanwhile, the S&P 500 increased, reflecting overall market optimism as the vaccination roll-out and re-openings continue in the US during the end of the month. Worries about inflation remain, following a sharp increase in both CPI and PPI in the UK, which may contribute to the flatlining in UK stock indices.

Figure 5: Oil price increased throughout June 2021 due to the resurgent global economy and OPEC’s move to prevent supply surpluses

Oil prices surged in the month of June, closing out at $75 a barrel. The commodities market is currently on a bull run with Forbes attributing the resurgent global economy and OPEC’s move to prevent supply surpluses as the main drivers. With the vaccine roll-out and easing of social restrictions, consumption of gasoline and aviation fuel in China and the US has also increased. There are expectations of further rises in the oil markets with further OPEC meetings coming. However, it’s important to note that OPEC's demand forecast does not account for the possibility of increased supply from Iran following the US – Iran talks and the spread of the COVID-19 Delta variant.

Figure 6: Slight decline in Manufacturing and Services PMIs in June, albeit from a very high peak in May. Continued growth in Construction PMI, taking it to the highest level since 1997.

The Services Purchasing Manager’s Index grew substantially for the fourth month running in May, increasing from 61.0 to 62.9. However, in June it fell slightly to 62.4 which indicated a softening growth due to Brexit, travel restrictions, cost increases and labour shortages in hospitality and leisure. Despite the fall, Services PMI remains at a very high level, far in excess of the crucial 50 point mark (which corresponds to signs of market growth).

Likewise, in Manufacturing, the PMI increased substantially in May from 60.9 to 65.6, largely driven by improving global outlook as Covid-19 recovery proceeds internationally. However, the index declined slightly in June to 63.9 because of higher production costs and longer production lead times. Although the index declined in June, it remains very high. Indeed, with the exception of May 2021, June saw the highest Manufacturing PMI in over 8 years.

The Construction PMI, meanwhile, continued to rise through both May and June, from 61.6 to 64.2 to 66.3. This marked the highest point for Construction PMI since June 1997, with sharp increases in all areas of construction. In particular, residential construction continues to grow at a very rapid pace. Cost inflation, input supply issues, and general high demand have led and may continue to lead to price increases in this sector.

Figure 7: YouGov/Cebr Consumer Confidence hit a 5-year high of 113.6 in May with GfK reporting no change in June 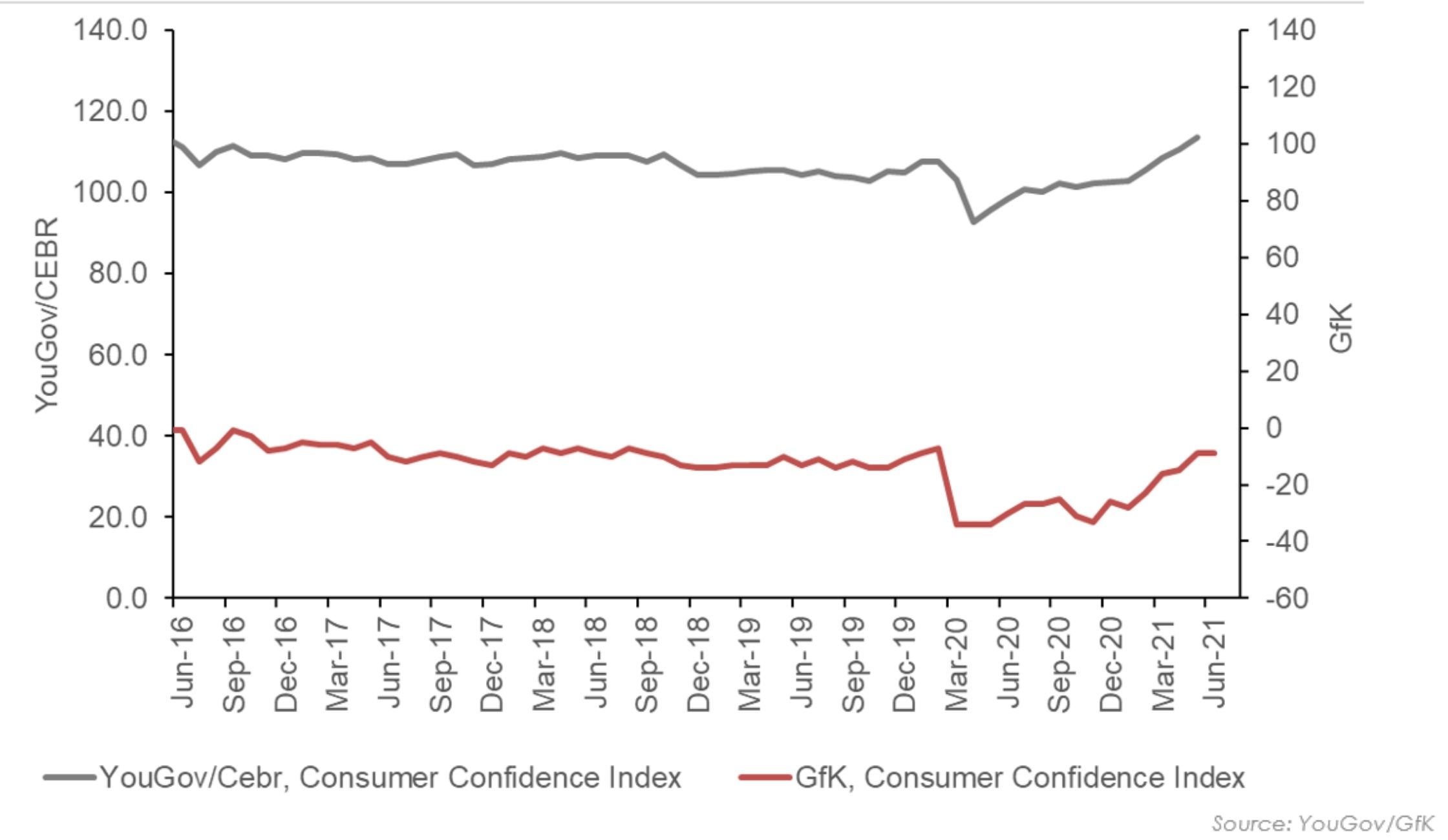 In the month of May, the YouGov/Cebr Consumer Confidence Index hit a high of 113.6, a level not seen since April 2016. With rising house prices and job security increasing, households are feeling more confident about personal finances as the economy opens up. Whilst there are concerns around a possible third wave and the end of the furlough scheme, there is still overall positivity amongst consumers.

The GfK Consumer Confidence Index remained at -9 in June. GfK noted that the stabilisation was a sign that the economy is on a positive track due to the increased confidence in personal financial and general economic situations and anticipated consumer spending ahead of domestic holidays.  However, inflation forecasts may have a dampening effect on consumer confidence which will be closely monitored as the UK is anticipated to remove the final restrictions on social interactions this summer.