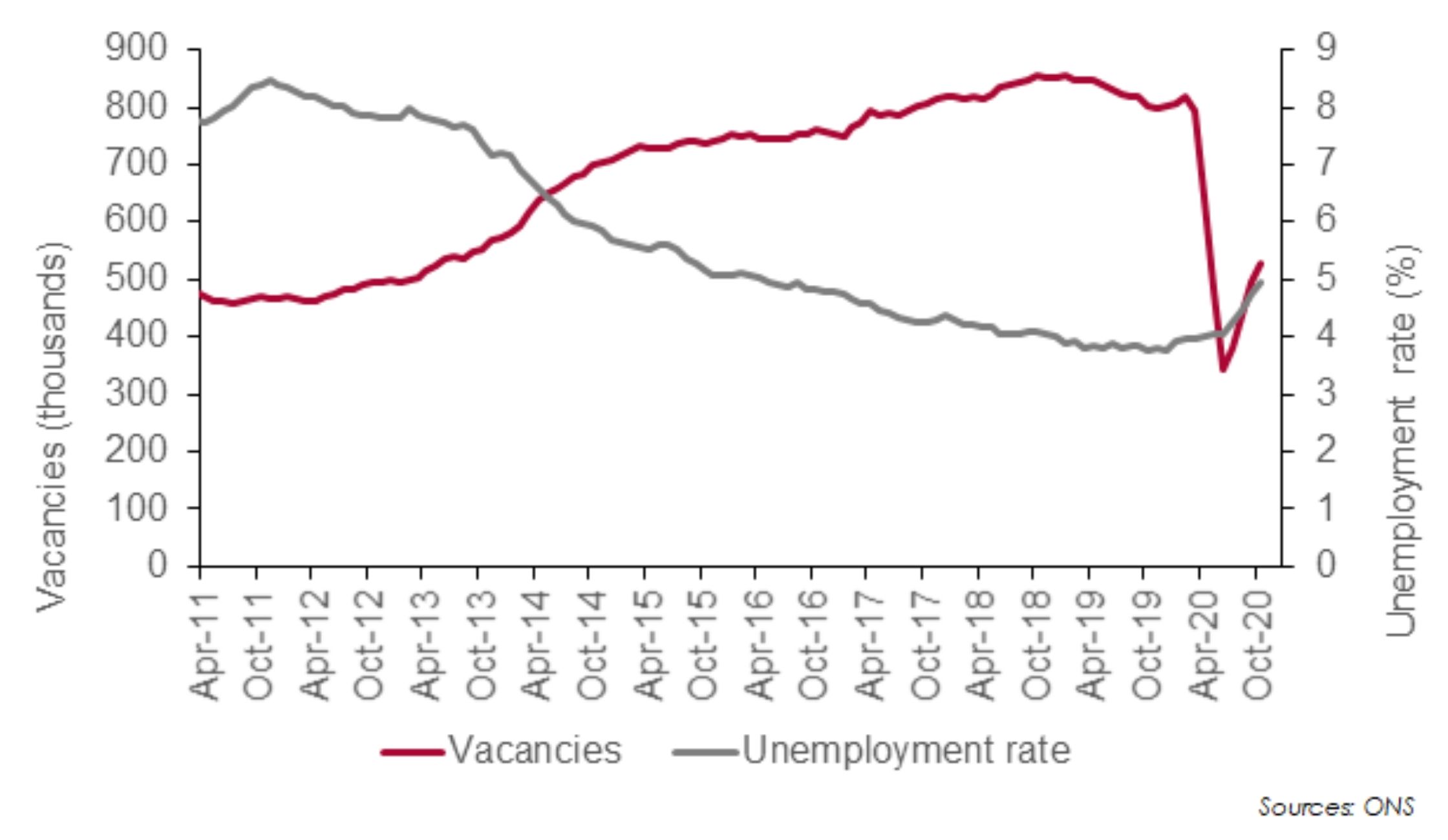 Vacancies and the unemployment rate, which are normally inversely correlated, increased together in the most recent period, August to October, reaching 529,000 and 4.94% respectively. This probably reflects a continued negative impact of the pandemic on unemployment, but a correction in the vacancy rate from the exceptional drop off seen in July to September. Employment in the latest Office National Statistics (ONS) data for August to October 2020 remained below the level for the same period in 2019 by a fall of 279,660 jobs. The impact of the Job Retention Scheme on these numbers is now very uncertain. Having been due to terminate in October and then January, the scheme has been extended to the end of March 2021. However, further restrictions and a worsening viral outbreak is likely to have encouraged many employers to make redundancies in October with retail, hospitality and manufacturing being the worst-hit sectors.

Figure 2: Inflation inched up in November and December 2020

PPI increased from -0.6% in the year to November 2020 to -0.4% in December. Overall, this reflects decreasing deflationary pressure during the period. The ONS breakdown indicates that this change is largely driven by metal, machinery, and equipment driving a 0.6 change in percentage points (p.p.). PPI remains in negative territory largely due to lower petroleum prices due to depressed global demand.

CPI 12-month inflation rate returned to the same level as October, up from 0.6% to 0.8% in December 2020. The ONS breakdown shows that the biggest contributor to the CPI increase was recreation and culture at 0.35 p.p, and housing and household services as well as transport at 0.18 p.p.. These were somewhat offset by a 0.11 p.p. decrease in food and non-alcoholic beverages and 0.09 p.p. decrease in clothing and footwear.

Continued heightening of restrictions is again likely to produce lower consumer demand, which will likely translate into lower prices. Inflationary pressure can therefore be expected to remain low, without significant monetary easing by the Bank of England. 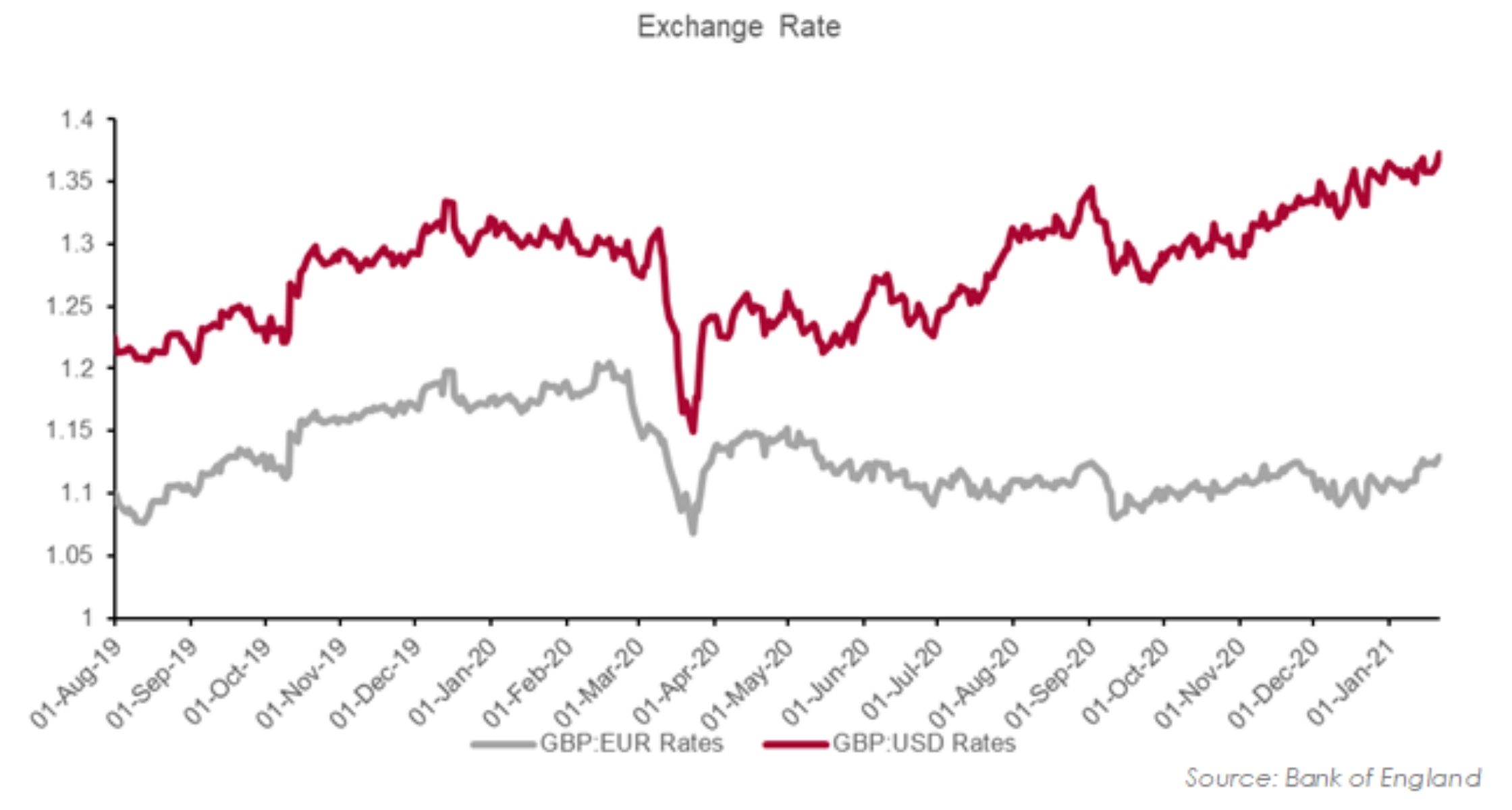 Sterling remained fairly constant from November to much of January relative to the Euro, with the exchange rate opening the year at 1.1065. Both EUR and GDP continued to appreciate relative to the USD, likely in the face of continued political turmoil following the US election and loose Fed monetary policy. The Pound reached 1.3649 USD on 31st December, the highest since 30th April 2018. Some of this is likely to be reversed following the successful and non-violent transfer of power to President Joe Biden.

The S&P 500 resumed its long-running growth trajectory after increased volatility around the US election. Some further volatility occurred during the insurrection at the US Capitol on 6th January, but this didn’t deter an upward trajectory, largely fuelled by technology firms and loose monetary conditions. In the UK, meanwhile, both FTSE 100 and 500 began to decline after a brief period of relative boom. Increased anxiety about the new variant first identified in Kent are likely to have damaged domestic prospects for firms on the FTSE indices. Variants found in South Africa and Brazil combined with worries about international vaccine roll-out efforts are also likely to have contributed to the slowing of stock market growth in the UK.

Figure 5: Oil prices increased substantially after a period of stability, but remain below pre-pandemic levels

Through November and December, the oil price rallied substantially from 36.6 USD per barrel on 2nd November 2020 to 53 USD per barrel on 21st January 2021. This came following a one-month cut to crude oil production in Saudi Arabia in February after Saudi Arabia announced a one-month unilateral cut to its crude oil production in February, according to the United States Energy Information Administration (EIA). EIA expect continued tightening of oil supply, leading to a flat projection for prices in early 2021. The International Monetary Fund (IMF) also attributed the price increase to the projected worldwide economic recovery following the vaccine roll-out. 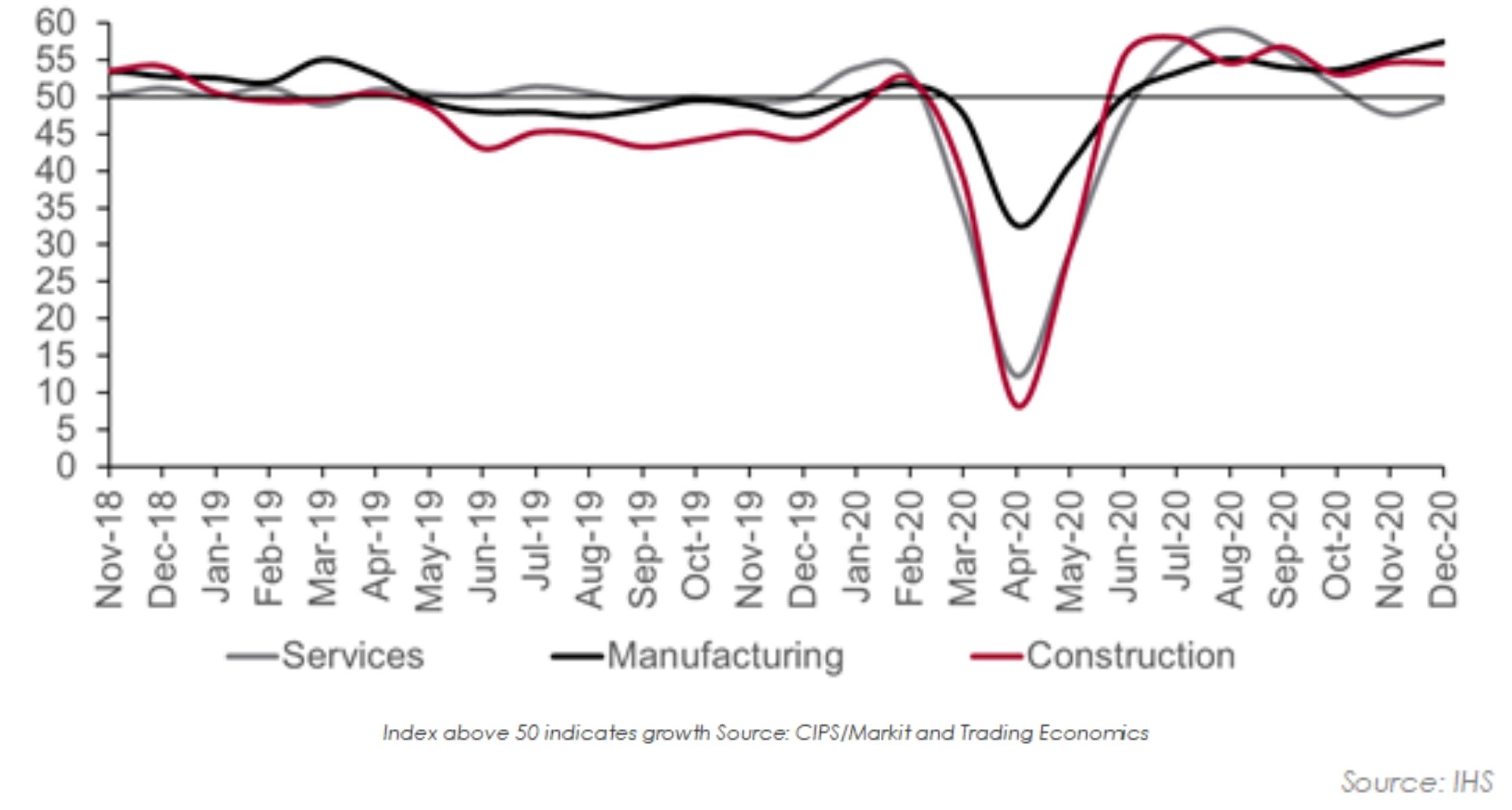 Construction and services purchasing managers’ Indices rose in December, with only services being below 50, which indicates a decline.

The services PMI rose to 49.4 in December after a relatively sharp decline through September, October, and November. This likely reflects significant concerns due to the worsening of the Coronavirus outbreak, which has particularly affected domestic services such as hospitality and retail. The services PMI remains below the crucial 50-point mark, meaning that the UK’s largest sector is in decline. Additional restrictions, imposed in January, are likely to have an even more negative impact going forward.

Manufacturing PMI, meanwhile, continued to increase during December. It reached 57.5 in December, the highest since November 2017. IHS Markit analysis attributed this growth to the production of intermediate goods, but noted that it came with continued job losses in the sector. Disruption at ports and stockpiling due to the Brexit deal were both also raised as factors affecting UK manufacturing growth.

Finally, there was a very slight decrease in the construction PMI from 54.7 in November to 54 in December. This was driven largely by continued house building and may reflect the less severe restrictions affecting the construction sector at the end of 2020. Growth may slow or reverse when the impact of lockdown restrictions implemented in January are captured in the figures. 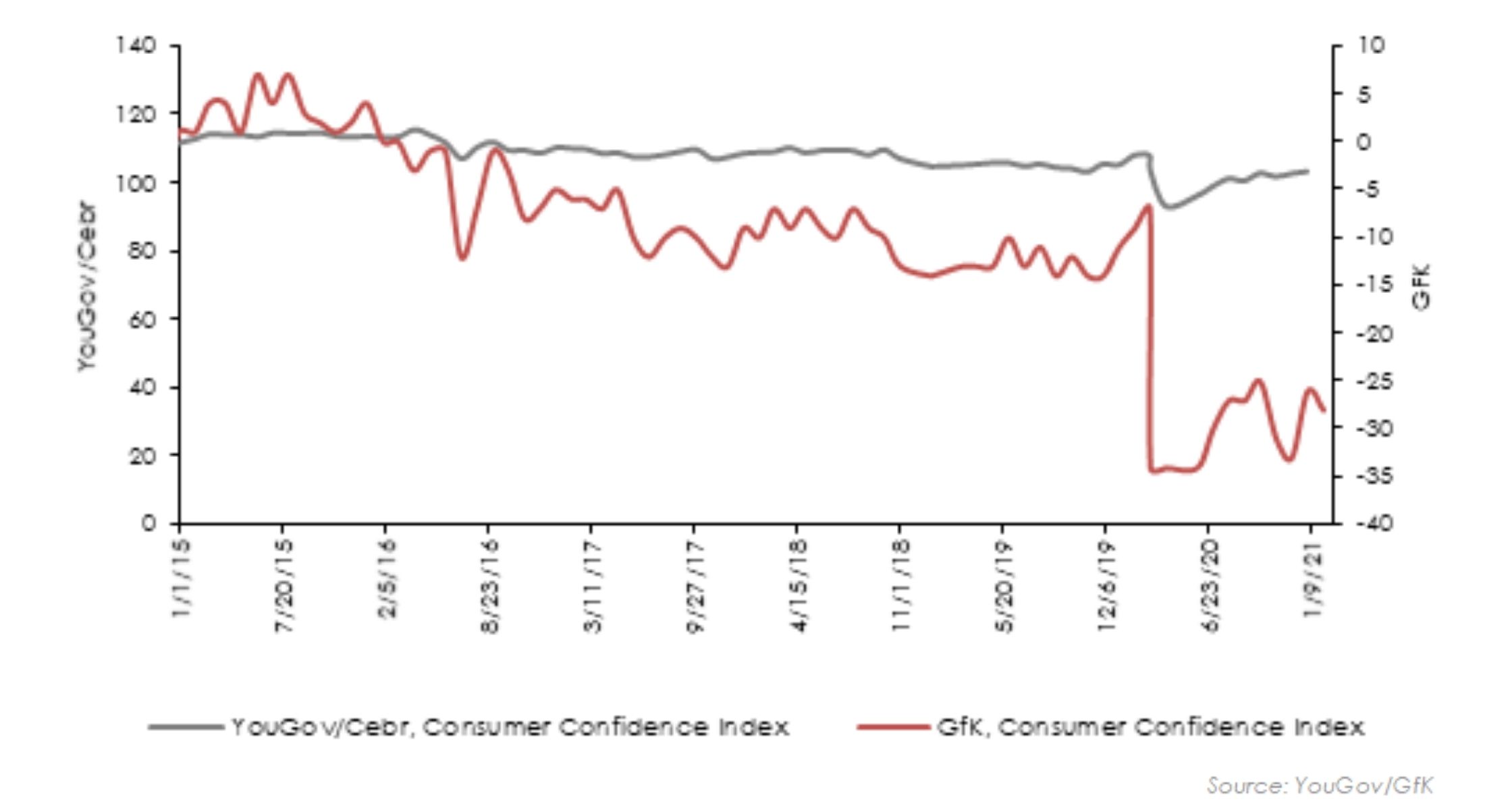 The YouGov/Cebr Consumer Confidence Index remained largely flat in November and December, reaching 102.9 at the end of December. It is still yet to recover to its pre-pandemic level of 103.3, though has recovered somewhat from a low of 92.7 in April 2020. YouGov/Cebr analysis highlighted that the slight increase is driven by increased confidence from both households on their personal finances and businesses on their activity outlooks.

The GfK Consumer Confidence Index has been particularly volatile in recent months. Having increased from its pandemic trough of -34 between March and May 2020 to -25 in September 2020, it reached -31 points in October 2020. Since then, it has rallied back to -28 in January 2021, but further volatility is to be expected over coming months. Gfk attributed the decrease from -26 in December to -28 in January to worsening consumer outlook on the economy for the following 12 months and greater unwillingness to make major expenditures.