Tristan Grove, Chair of the Communications network was at our summer conference and writes up his thoughts

There aren't many organisations out there that could, on a hot Saturday in July, draw several hundred people into an under-ventilated basement lecture theatre to talk about politics. Especially when those people are (like me) receiving interminable updates from friends having the time of their lives at Pride. But it's a testament to the standing and influence the Fabian Society still has that it was able to do just that.

Somehow managing to clash with both London Pride and the Durham Miners Gala, the Fabian Society Summer Conference held its own against both, running a pantheon of speakers from Stephen Bush and Philip Collins to Lisa Nandy and Yvette Cooper.

And even if the exact day may not have been ideal, what better time than now for the Fabian Society to step forward? With the most tumultuous election in a decade just behind us and the political event of our lifetimes about to take place, there has never been more need for the Fabian Society to do what it was created to do and generate ideas for the progressive left.

So, how did it do? Well, the conference has certainly been generating headlines, particularly through Yvette Cooper’s powerful keynote speech in which she decried the ‘vitriolic abuse’ heaped on not only politicians, but also on the BBC. ‘I think it’s time Labour did something unfashionable,’ she said to the packed Kings College lecture theatre, ‘and stand up for our BBC’.

Her headline-grabbing calls to end abuse that was ‘straight out of the Trump playbook’ came as part of a four-point plan to get Labour back into power. Also included in the plan was Labour putting its weight behind a ‘progressive Brexit’, and turning its attention to the economic divide between thriving cities and the UK’s smaller, struggling towns. For, as she noted, ‘two thirds of the seats that Labour must win to get a majority are towns’. And while Labour has always ‘drawn together metropolitan intellectuals and the industrial working classes,’ in this election ‘we had to work much harder to hold onto working class voters’.

It was a theme echoed elsewhere in the conference. While Cooper worried about the loss of Labour’s working class supporters and called on it to maintain its ‘broad base’, Seema Malhotra MP also warned that ‘the swing to the Tories in some of our working class seats was staggering.’ Speaking at a panel session entitled ‘For the Many: Understanding and expanding Labour’s coalition of voters’, she said that Labour had to ‘put aside our prejudices and shore up that fractured voter base.’ 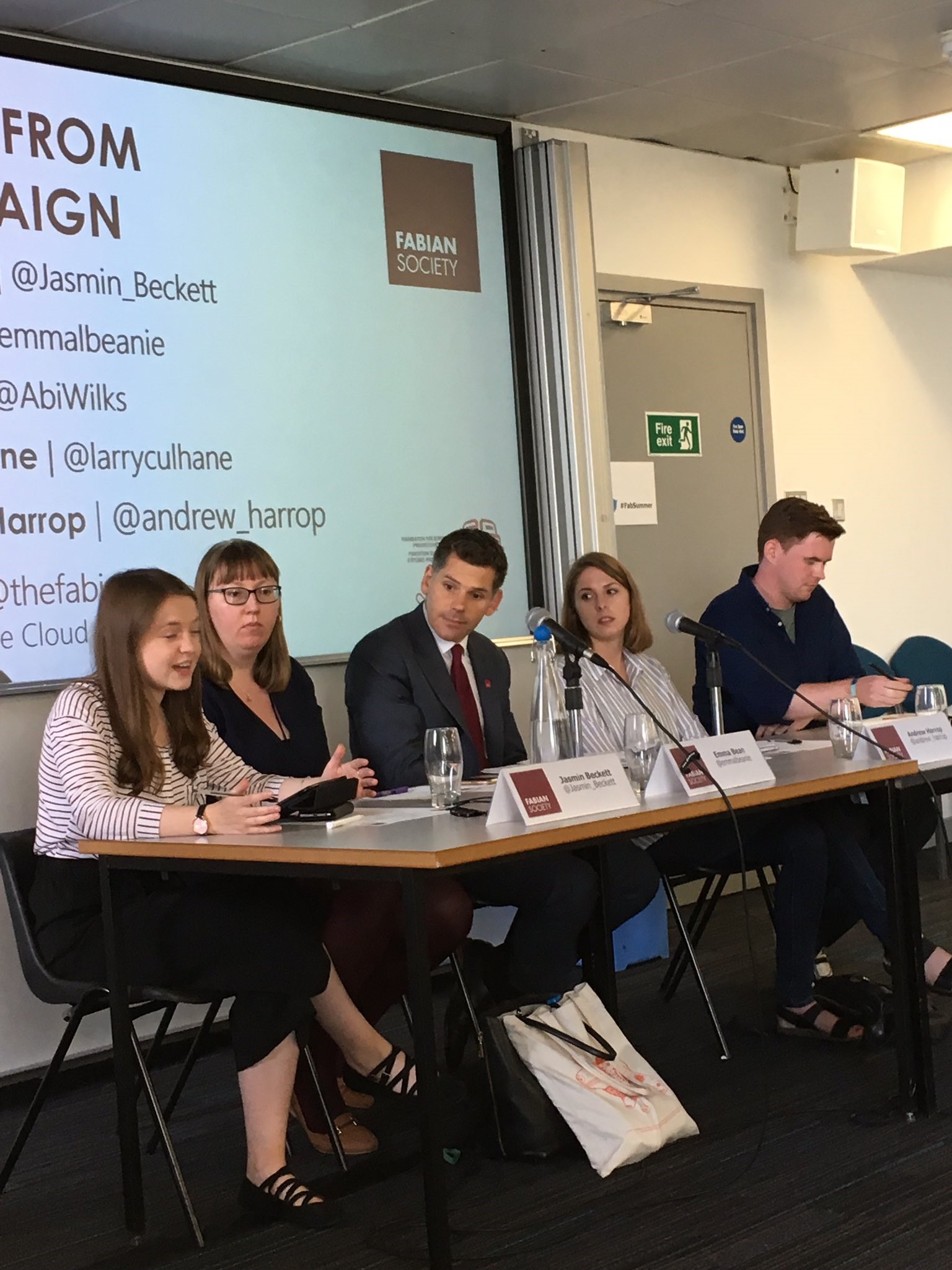 Speaking on the same panel, Lisa Nandy MP agreed that Labour’s electoral ‘coalition is incredibly difficult to sustain’, and warned that a ‘narrow church is the biggest threat the Labour movement has ever faced.’

So, while Yvette Cooper and others like Owen Jones rejoiced that ‘people were inspired by Labour’s vision’ in the last election, there were also stark words of warning for the party. As Seema Malhotra pointed out, ‘the Conservatives have to win ten more seats for a majority. Labour has to win 64,’ many of them in working class areas where Labour is losing support.

There were other, more positive messages too though, for example at the Young Fabians’ own fringe event: ‘How can Labour ensure the protection of LGBTQI+ rights for the future’. Chaired by Young Fabian Exec member Rebecca Meredith, the panel session featured Chris Bryant MP, Tyrone Steele, founder and director of LGBT Leaders, Sophie Cooke, a trans activist and former Labour PPC for East Worthing and Shoreham and Emily Brothers, a trans and disabled activist as well as a former Labour PPC for Sutton and Cheam.

A broad-based panel session, it covered everything from media representation of trans people to international LGBT issues. And on that, Bryant’s particularly interesting comment… ‘look at Australia, the campest country in the world, and even they can’t get gay marriage right.’

A slightly more sobering note though, came from activist Sophie Cook: ‘LGBT rights have been hard fought for, but it’s all too easy for them to be taken away’. Overall though, it was an extremely positive and inspirational event for Pride, the mood of which was summed up well by Bryant: ‘Labour has always had a strong LGBT tradition, and we all hope that will long continue.’ 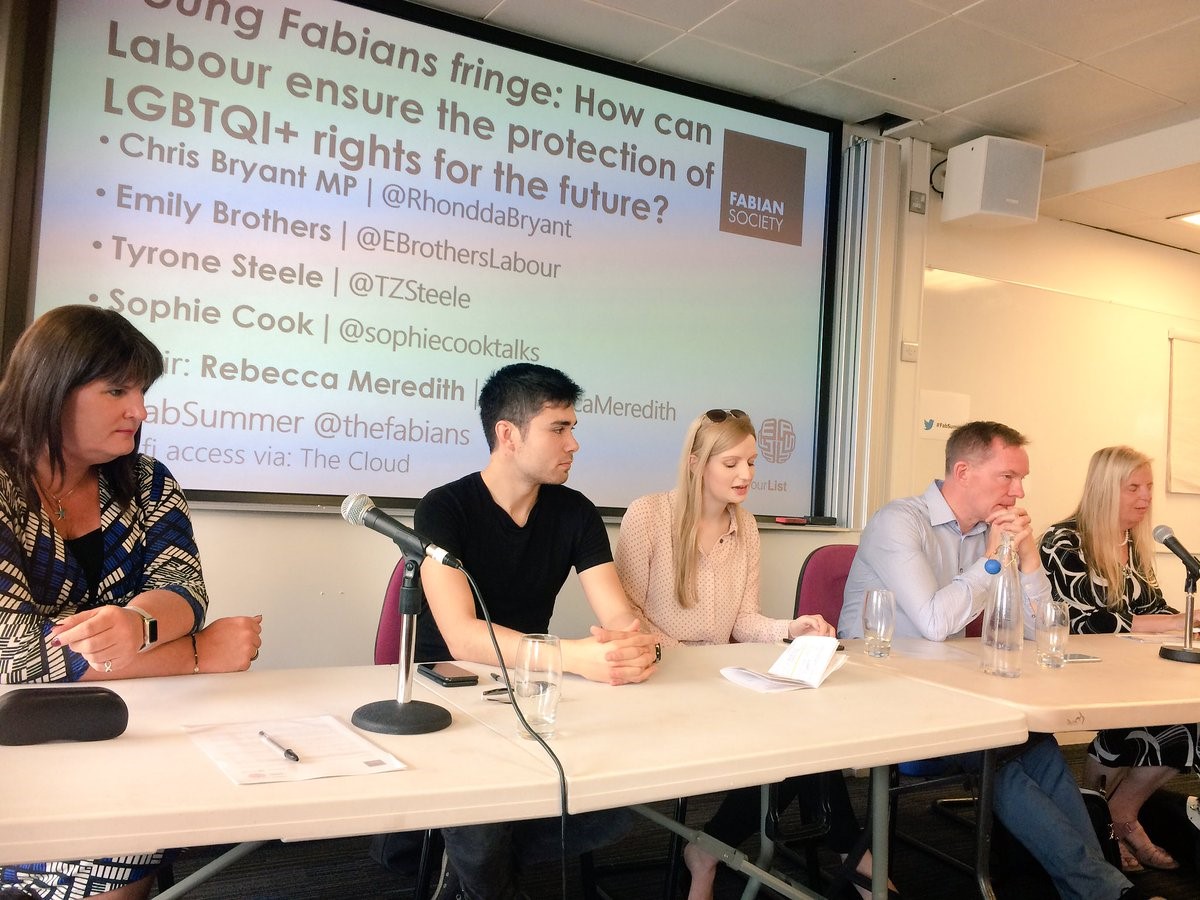 The Fabian Society Conference drew to a close with a plenary ‘Question Time’ session hosted by Fabian Society Chair Kate Green MP. On the panel were big names from across the worlds of journalism and politics, including Andy Slaughter MP, Lord Roy Kennedy, Stephen Bush from the New Statesman, Philip Collins from the Times and Sarah Olney, the former Liberal Democrat MP for Richmond Park.

Covering everything from Momentum and the idea of a ‘progressive alliance’, to the housing crisis and the obligatory question about Brexit, it was a thoroughly engaging exploration of the state of British politics. It also through up a few stand-out and often surprising comments. For starters, Stephen Bush’s praise for Momentum, saying they were ‘definitely an asset in this campaign – their videos were some of the best campaign videos I’ve seen’. Or Philip Collins’ claim that ‘the Labour Party is too broad a church’.

There were also insightful comments from all sides, including Sarah Olney’s claim that the fact that people are struggling to buy homes in the housing crisis ‘militates against communities’, as well as Collins’ assertion that ‘if you as a party try to thwart the Brexit process before there is any crystalised regret, you will just look like you haven’t been listening.’ Agree with these sometimes controversial comments or not, but the panel’s engaging and insightful discussion was a fitting end to a conference that showed the Fabian Society at its best, tackling the issues that matter and generating informed and influential ideas for the left.

Tristan Grove is Chair of the Young Fabians Communications Network