Europhilia and Its Transatlantic Discontents

Nicholas Trickett discusses the implicit Europhilia of critiques of American power and capitalism.

It’s easy to be bearish on the United States these days. The fatigue of four years of Trump and inbuilt distrust of Europe’s senior security partner sow deep doubts. James Meadway’s recent piece in the New Statesman peddled the trope of America’s economic decline against all, a story that has been told and retold since the Great Inflation in the 70s and Japan’s meteoric rise first triggered handwringing over threats to American dominance. As an American settled in the UK, I wholeheartedly agree with the prognosis that the country faces a socioeconomic inflection point. But the framing of lost dominance, while much more applicable in the case of China’s rise, obscures more than it clarifies about the world post-COVID. American decline thus far has been manageable and is not yet a permanent reality. Europe, however, has seen its own relative decline accelerate over the last decade.

The Eurozone and European Union were a rising force in global affairs until the financial crisis in 2008, after which austerity kneecapped recovery and worsened Europe’s numerous structural problems. You can see from the following that the US actually recovered some of its share of global GDP from its nadir. Post-crisis, Europe steadily loses its position and even Chinese growth moderates after a financial market panic in 2015-2016: 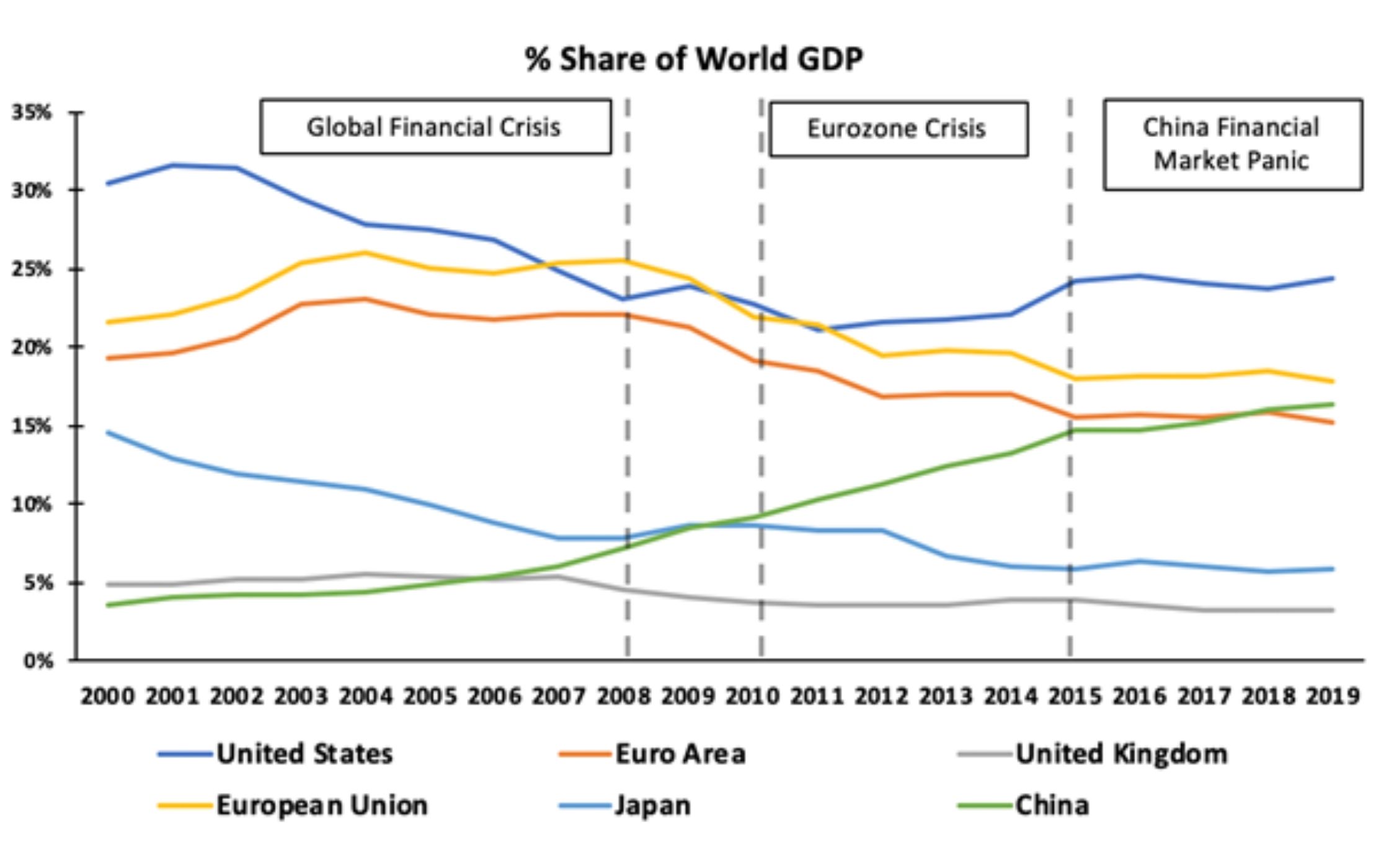 Share of global GDP is a clumsy proxy for economic influence, but still relevant when considering the size of one’s market and its ability to influence regulatory regimes, consumer preferences, and more. This picture would look more stark taking the Asia-Pacific as a whole, but China’s rise alone is something to behold. China overtook the Eurozone for share of the world economy in 2018-2019, and a plethora of indicators show just how fast the balance of economic power has shifted. A basic indicator is oil demand. China consumes more oil than the European Union and now hosts more refining capacity than Europe, in hot pursuit of the United States. China’s influence over global commodity markets significantly exceeds that of Europe and makes it a price-setter based on the state of its economy since many of the resources it consumes become exports then sold to the United States and Europe.

The capitalization of national economies’ firms listed on domestic stock markets is another useful, if clumsy, proxy for economic power. Capital markets are used to finance investment, raise debt, influence investor preferences and trends, affect flows of capital, and direct national and international economic activity. The larger one’s total capitalization, the more investors trust your market to provide returns, financing, and more. Consider the following chart for a sense of the world pre-COVID. I left the UK out because the World Bank didn’t have data in 2008, and China’s share will have risen since 2018: 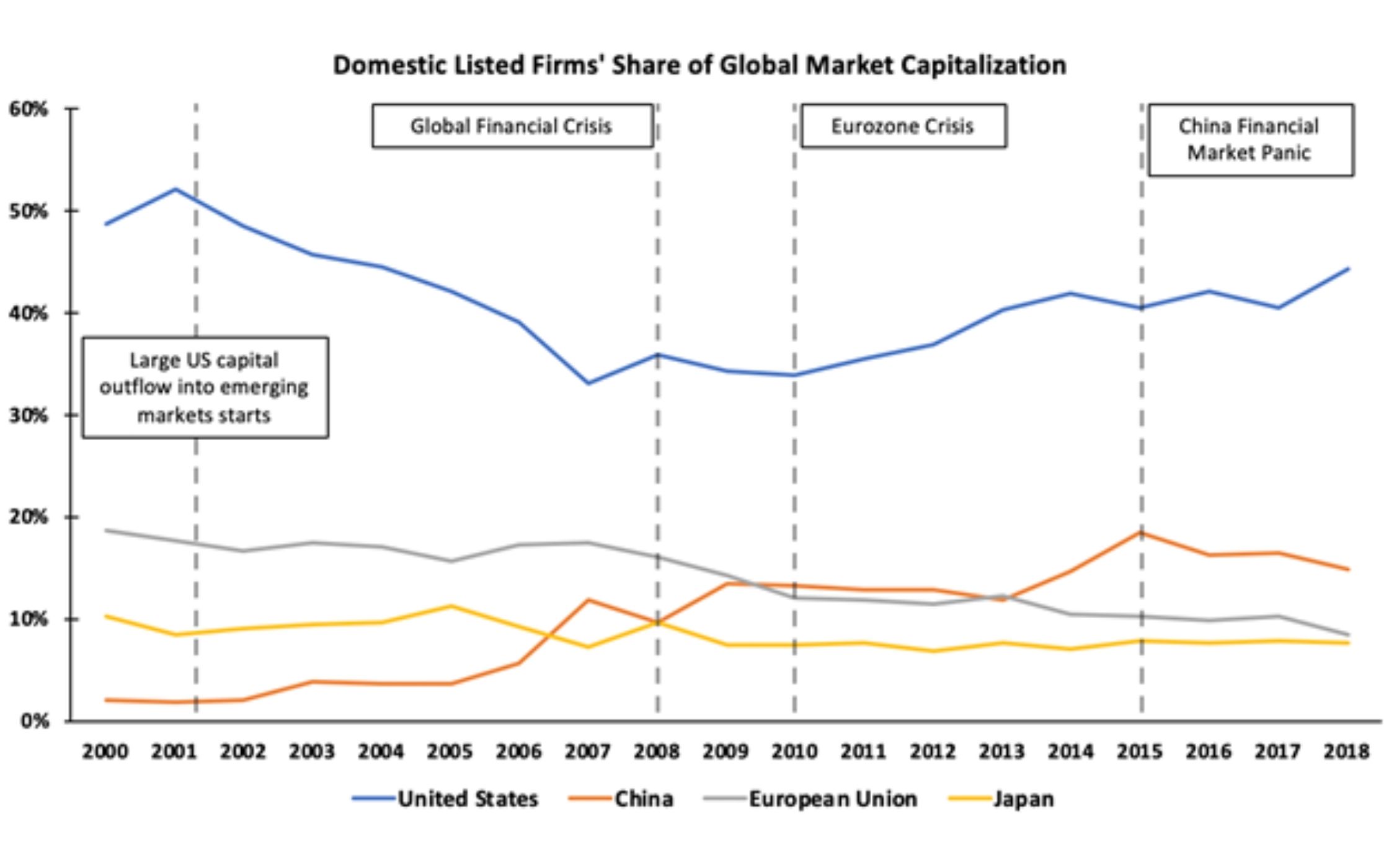 If you carve out total equity from domestic firms and break it down into sectors, the EU is flailing on key fronts. By late August, US tech stocks were worth more than the entire market capitalization of European stock markets and EU firms, and American and Chinese firms are far ahead of their European peers in terms of capitalization and scale. In fact, EU attempts to more strictly regulate the tech sector have tended to strengthen the competitive position of American and Chinese tech firms because they can more easily afford the costs of compliance than European startups trying to grow. While more recent efforts to introduce stricter competition laws could provide more space for European firms to grow, they still will face a tougher time raising a lot of capital fast aided by investor confidence in returns. What’s more, European banks no longer have a viable path to becoming global giants and US and Asian banks increasingly dominate the sector, both for returns as well as equity. I and millions of others wish the UK was staying in the EU, but even if it did, the economic outlook for the bloc was weak. EU regulatory regimes lower tech costs for consumers, but they don’t foster firms that can compete with the US and China.

There’s little doubt the US will have to accept a relative decline, at least based on current trends. The sheer size of China’s population guarantees large room to grow. But China’s own ailments – from demographic pressures to struggles to control the value of its currency, to the need to tightly regulate flows of capital – also hinder its future prospects. It’s just as easy to forget that while China’s economic success has lifted tens of millions out of poverty, it remains a highly unequal society which, like the US, has a fairly weak social safety net. Capital controls are a vital necessity to avoid financial instability and potential problems for the mountains of unsecured debt financing economic activity. The list goes on, even given China’s notable successes.

The frequently implicit Europhilia of critiques of American power and capitalism – shared by critics on both sides of the Atlantic – miss the real crisis of transatlantic relations. Europe’s relative power, both economically and militarily, has declined to a greater degree than the United States'. Anger at the Trump administration’s incoherent belligerence has hidden this underlying reality, one that an incoming Biden administration will be well aware of in negotiating to advance what it perceives to be the national interest. Building back better has to raise growth, otherwise Europe risks “losing” the recovery.

Nicholas Birman-Trickett is a political risk and energy analyst focused on the political economy of energy, economics, and foreign policy in Russia and Eurasia. He holds an M.A. in Russia/Eurasia regional studies from the European University in St. Petersburg and an MSc in international political economy from the LSE. He currently runs a newsletter (and quasi-blog) primarily covering Russia and Eurasia, the effects of the COVID shock on their politics and economies, as well as the energy transition called 'OGs and OFZs'.