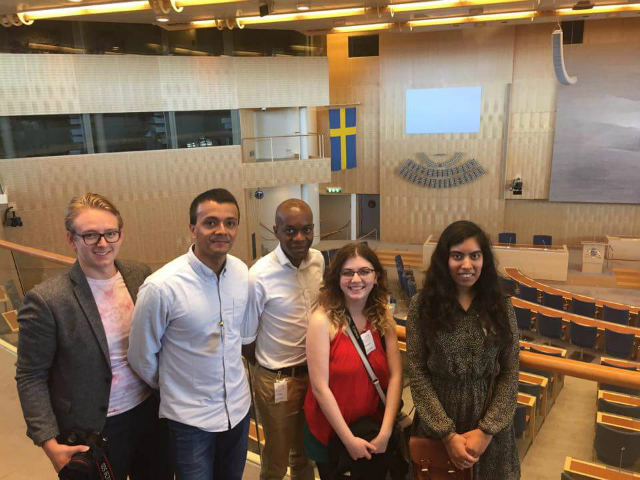 Day one of the Young Fabian International Network delegation to Sweden included a tour of the Swedish Parliment, and meeting with Jens Orback, Secretary General of the Palme International Centre and more!

On day one of the SSU congress Young Fabian delegates were taken on a tour of the Swedish Parliament, Sveriges Riksdag with the young Swedish Social Democratic MPs Alexandra Völker. Followed by a tour of the old city in Stockholm.

In the afternoon delegates met with Jens Orback, Secretary General of the Palme International Centre and Andrine Winther, International Secretary of the Swedish Social Democratic Party. At these meeting the legacy of Olof Palme was discussed, in addition to SDP international development priorities. Delegates were then taken to Västerås, where the SSU Congress is being held.

Later in the evening delegates met with Laila Naraghi, Political Adviser to the Minister for Foreign Affairs. Topics covered during the meeting included Swedens foreign policy priorities over the next parliament and the government's focus on implementing a Feminist foreign policy.