Figure 1: The number of vacancies increased slightly in March 2021 while unemployment dropped slightly to 4.9% in quarter ending February 2021 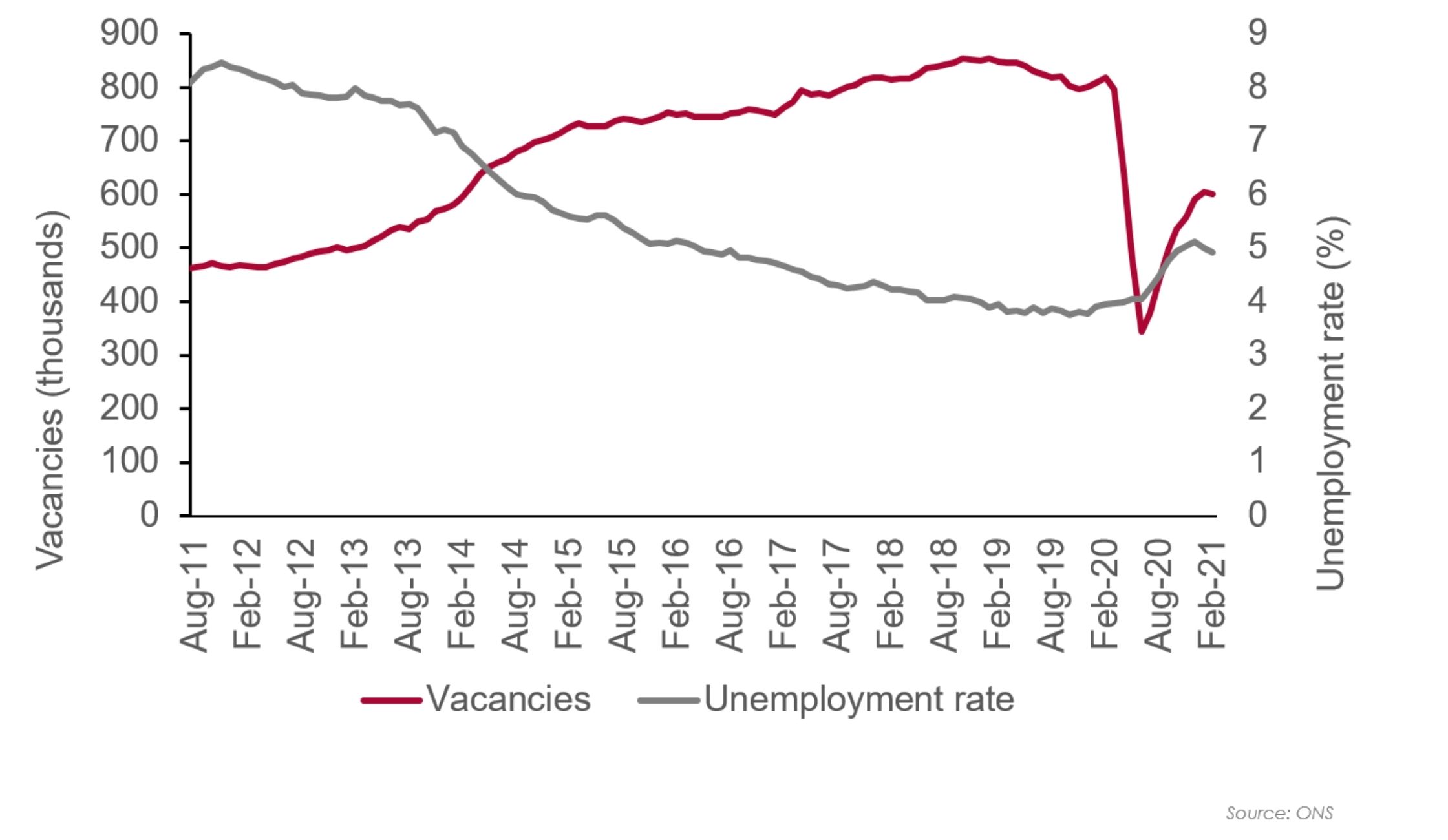 The unemployment rate fell slightly from 5.0% in the quarter to January 2021 to 4.9% in the quarter to February 2021. The ONS highlight this as the first quarterly drop since October to December 2019. Vacancies also showed a slight decrease in February but moved to another small increase of 17,000 in March which represented a half-year consecutive decline in the increase of vacancy numbers. With the slow easing of restrictions across the UK, coupled with the successful roll out of the vaccine there is cause for a positive outlook. However, as the furlough scheme comes to an end this summer, there are expectations of spikes in unemployment.

CPI inched up from 0.4% in the 12 months to February 2021 to 0.7% to March 2021. This was predominantly driven by an increase in transport costs, mostly attributable to an increase in fuel prices (0.15 p.p. relative to February) as well as clothing and footwear (0.11 p.p.). It was slightly offset by a decline in the price of food and non-alcoholic beverages (0.07 p.p.). Both figures likely reflect that the 12 months to March entirely occurs since the first outbreak, meaning the 12-month rate is relative to a level within the pandemic. The fluctuation remains small, however, and the rate doesn’t yet appear to have deviated from the post-pandemic average, which is far below the 2% target.

PPI, meanwhile, rose abruptly in March from 0.9% in the year to February 2021 to 1.9% to March 2021. Transport Equipment (1.79 p.p. 12-month growth rate) and Metal, Machinery, and Equipment (0.68 p.p.) made the largest contributions to the increase. It marked the highest Producer Price Inflation since July 2019 which preceded the beginning of the pandemic.

Figure 3: GBP stabilised against USD and EUR in the month of April 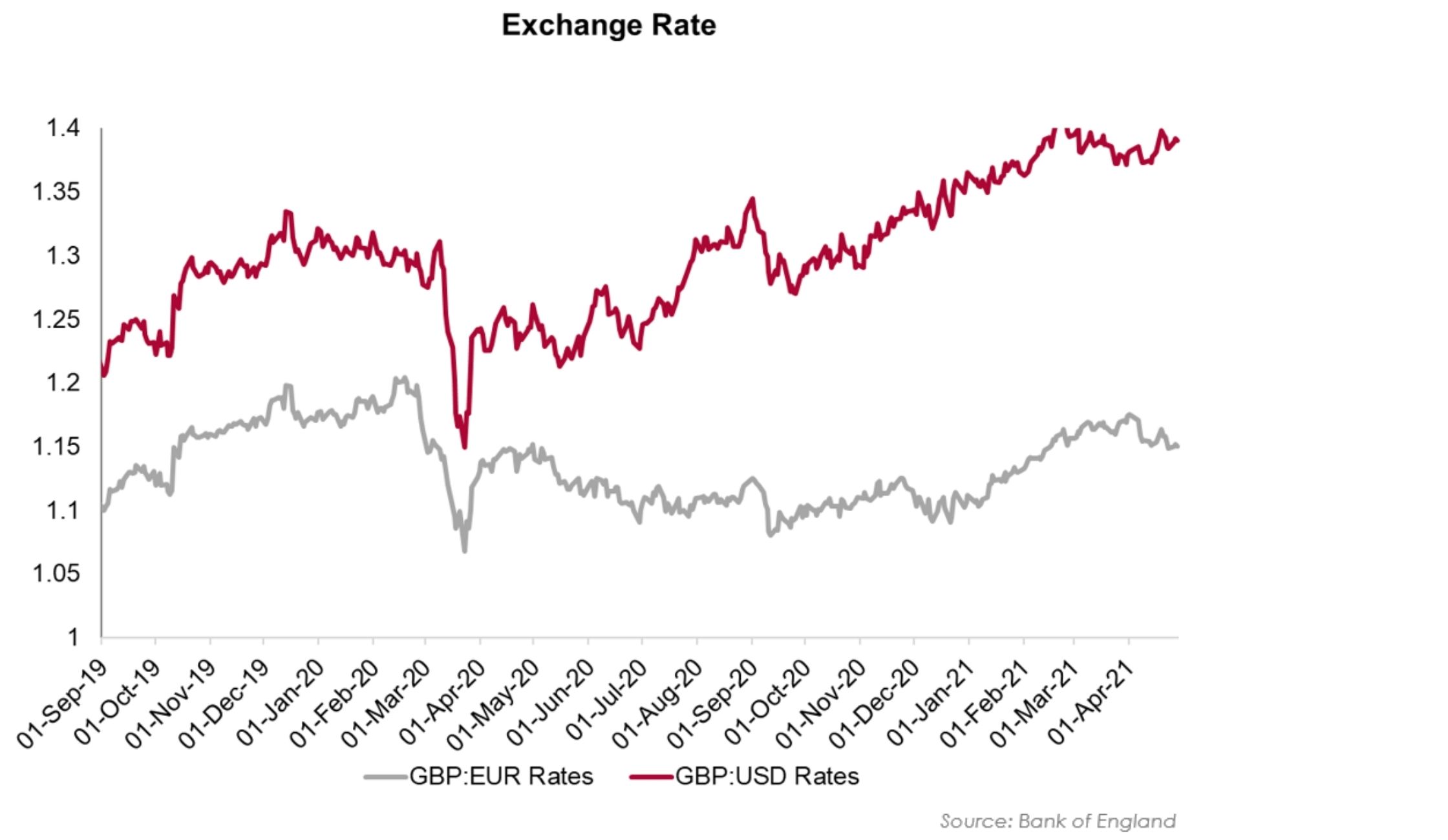 GBP continues growth at a slow and steady pace against EUR and USD, flattening off towards the end of April 2021. The strengthening GBP has been in tandem with improved market expectations due to lower COVID-19 related deaths and the steady rollout of the vaccination programme. Furthermore, April is typically a strong month for GBP due to the UK’s tax year end in April which encouraged companies to bring back overseas profits to the UK. In the case of GBP : EUR, the upcoming elections in Scotland will be watched closely by analysts for any market volatility.

Figure 4: S&P 500 continued their upward trajectory in April after drops in February; FTSE 100 and FTSE 250 increased although the existing level remained below pre-Covid level

Growths in FTSE 100, FTSE 250, and S&P 500 all continued in April with FTSE 100 exceeding 7,000 for the first time in more than one year The growths were powered by hopes of a strong economic rebound following Covid-19.

After hitting a high of $65 per barrel in mid-March, oil prices have stabilised, moving into end-April at $62 per barrel. On 1st April, OPEC+, responsible for more than a third of global production, announced that it would begin easing current limits on production from May alongside Saudi Arabia’s recent commitment to gradually easing its 1 million barrel per day cut throughout the next three months. This agreement meant that crude oil prices dipped in the days after the announcement, but it has rebounded as a sign that the group is confident in a future global recovery. This optimism does come up against a backdrop of rising cases in countries such as India and Brazil that still may derail recovering demand in the oil market.

Figure 6: All PMIs were in growth-territory with multi-year highs in every index

All Purchasing Manager’s Indices saw a stark spike in March 2021, with each one above the crucial 50 point mark – indicating sector growth – for the first time since October.

Services PMI rose from 49.5 in February to 56.3 in March. This was the highest since August and is probably attributable to the beginning of the gradual lockdown easing and more residential property transactions. General optimism was accompanied by job growth in the sector, despite no rebounding in exports. Concerns remain, however, due to the sharp increase in PPI mentioned earlier, which put cost pressures onto producers.

In Manufacturing, meanwhile, growth grew as well, but from a higher level. The PMI grew from 55.1 to 58.9, a 121 month high. It comes on top of a sustained period of growth for the Manufacturing sector, which is again linked to the easing of Coronavirus restrictions. Supply chain disruption was an issue, however, with the supply of Manufacturing inputs impeded by Coronavirus and Brexit, among other factors.

Finally, Construction PMI saw a clear increase from 53.3 to 61.7. It marked the third consecutive month during which the PMI was over 50 points. All major sectors of Construction saw growth, but Housebuilding led the way. Work displaced by the pandemic was able to resume, and the industry became supply constrained. This caused input prices to increase somewhat.

Figure 7: Consumer Confidence made a slow but positive recovery from March to April 2021 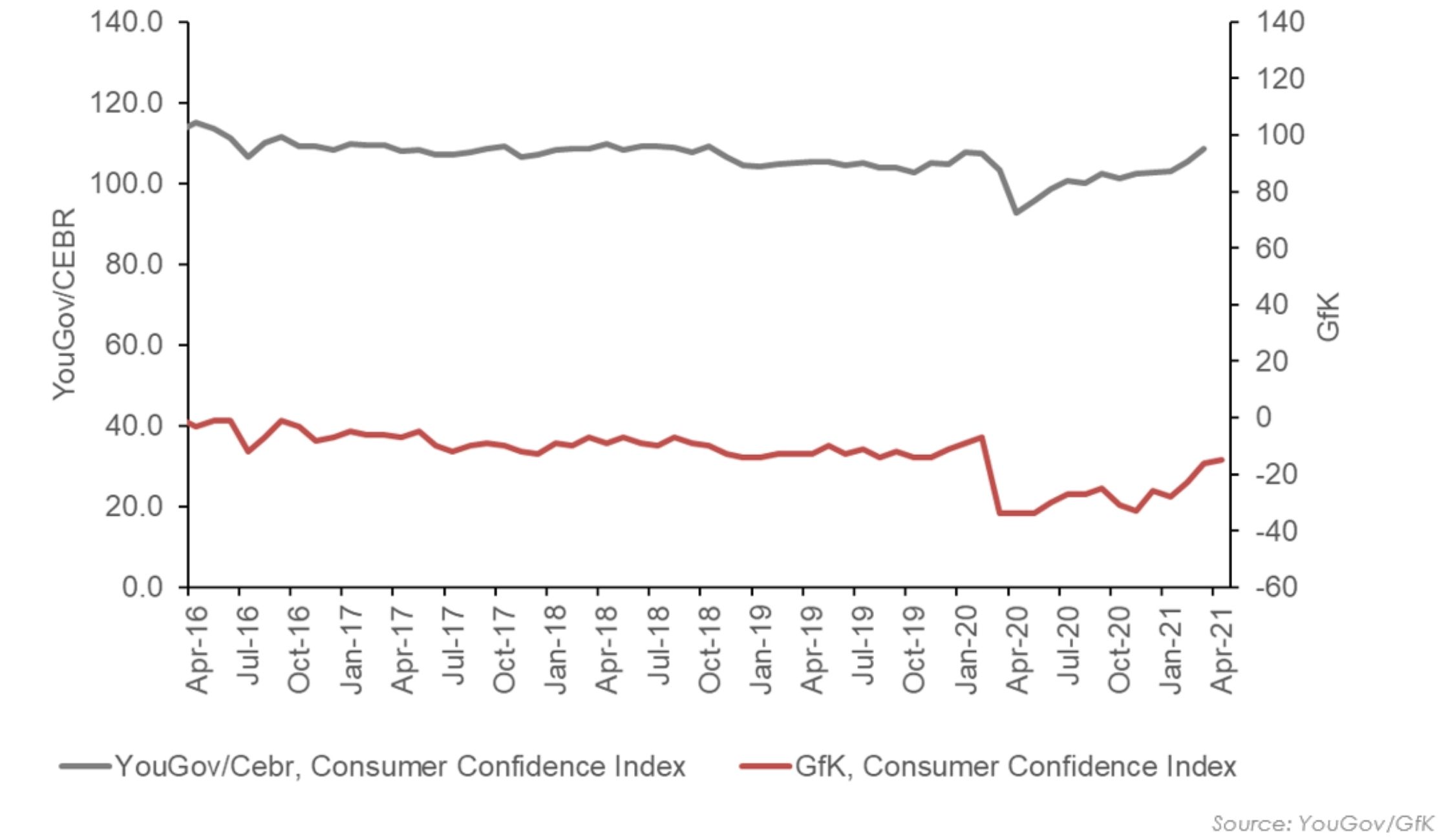 The YouGov/Cebr Consumer Confidence Index increased from 106.4 in February 2021 to 108.5 in March 2021. The continued increase, YouGov/Cebr analysis highlighted, was a result of increasing economic activity due to the slow easing of COVID restrictions and the uptake of the vaccine. Home values also increased throughout March while optimism over job security and household finances have also seen improvement.

The GfK Consumer Confidence Index increased from –23 in February, to -16 in March and -15 in April. GfK attributed the recent steady rise to a forecast of economic recovery in the second half of the year. Whilst improved consumer mood and the roll out of the vaccine has seen moods lift, this is a against a backdrop of rising debt and inflation, covid-19 variants and the end of the furlough scheme this summer, making for a bumpy road ahead as people were less enthusiastic about making large purchases.