The International Monetary Fund (IMF) issued their latest global economic outlook growth projections a few weeks ago. Their revisions represent a severe impact on growth, primarily due to the Covid-19 pandemic. 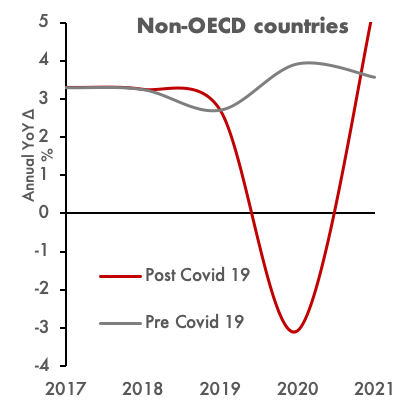 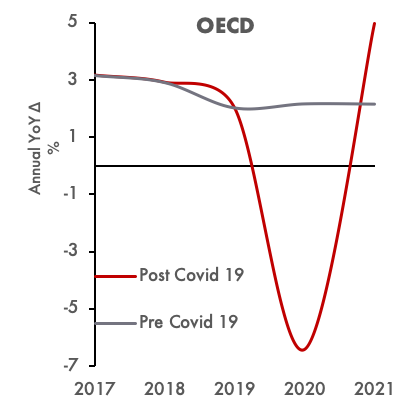 Figure 2: Global borrowing as % of GDP is expected to rise in 2020 before partially decreasing in 2021 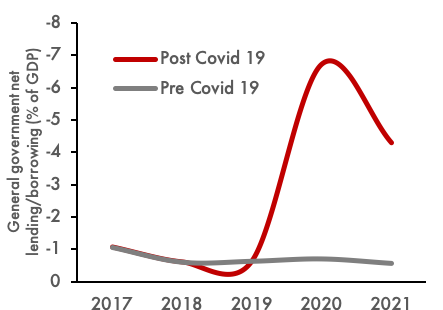 Global borrowing as percentage of GDP is expected to increase in 2020 due to government stimulus packages worldwide. In the case of the UK, this is done via the furlough scheme covering 80% of the salary of furloughed employees up until June 2020 and Government-backed small business loans among others. According to the IMF, this is expected to decline in 2021.

The UK’s unemployment rate had stabilised at 4.0% as of February 2020 which is similar to a year ago. In February 2020, the UK had not yet witnessed the impacts of Covid-19 pandemic which had seen substantial lay-offs or staff furloughing.

Figure 3: The UK unemployment rate had stabilised while number of vacancies dropped

The Consumer Price Inflation (CPI) had decreased from 1.7% in February 2020 to 1.5% in March 2020, driven by falling costs of vehicle fuels and clothing. The declines were partially offset by the increasing flight ticket prices.

Meanwhile, ONS data had shown 795,000 vacancies in the UK for Q1 2020 which is 52,000 fewer than Q1 2019. The sectors showing the highest decrease were Manufacturing, Wholesale and Retail, Vehicles Repair, Professional, Scientific and Technical as well as Information and Communication.

Figure 4: Both the CPI and PPI fell due to a fall  in raw materials and energy costs

The GBP had been appreciating against the EUR and USD following the 2019 General Election up until late February for EUR and early March for USD.

However, the GBP depreciated thereafter by c.12% for both EUR and USD up until 23 March 2020. The movement can be attributed to the Covid-19 pandemic and the resulting interest rate cut to its lowest ever level of 0.1%. Moreover, the possibility of no deal Brexit amid the Government’s insistence in sticking to the original timeline of December 2020 had weighed on the investors’ minds. In particular, the factors here had driven investors to the USD in search of safe-haven assets.

Subsequently, the GBP had partially recovered against the EUR and USD which can be explained by the market sentiments improving, as seen by the stock market recovery above. Moreover, investor sentiments towards the GBP and UK assets had improved following the Chancellor’s launch of the furloughing scheme and business loans.

UK and US stock markets

Figure 6: UK and US stock indices in the bear market in March before partial recovery in April

UK and US stock indices entered into the bear market in March 2019 with the lowest point being reached on 23 March 2020. Investors were concerned with the wider economic impacts of Covid-19 and the oil price war between Russia and Saudi Arabia.

The partial recoveries in April 2020 are explained by two factors: firstly,  the optimism brought about by Remdesevir developed by Gilead which has been thought to accelerate patient’s recovery from the Coronavirus; and secondly, the UK market reacting positively to the extension of the furlough scheme until end-June.

It must be noted that recovery in the stock market is based on investor sentiments and might not indicate an economic recovery.

Global oil prices have seen their steepest one-day decline in March 2020 since the Gulf War, plunging by 30% after OPEC failed to reach an agreement amid a price war and the economic impacts of Covid-19.

The pessimism over the global oil demand has also persisted in April 2020 despite an agreement struck on 12 April 2020 by Organization of the Petroleum Exporting Countries (OPEC) to cut global oil production by c.10%. The US shale oil futures had even reached the negative territory on 21 April 2020 amid concerns over oil storage costs.

Figure 8: PMIs in all three sectors below 50 in March after a brief respite post-General Election

Services PMI had reached a new low of 34.5 in March 2020 which was the lowest level since the survey began in 1996. This was even lower than a previous low of c.40 during the 2008  GFC. The new low is attributed to the rising unemployment rates, business lockdown and travel curbs.

Meanwhile, Manufacturing PMI had also declined to 47.8 in March 2020 due to the supply chain disruptions as well as decrease of both domestic and international customer orders.

As for Construction PMI, it had reached a low of 39.3 in March 2020 which was the lowest reading since the 2008 GFC due to the supply chain disruptions and concerns over workers’ safety, both of which resulted in delays of construction work. Moreover, there were signs of declining demand from sectors including the residential market.

Figure 9: Steep decline to -34 in March GfK Consumer Confidence Index, a level not seen since the 2008 GFC

* Score over 100 means more consumers are confident than unconfident

YouGov/CEBR Consumer Confidence Index for March 2020 is still above 100 points at 103.3, albeit showing a drop from 107.5. This represents the most substantial monthly drop since the EU referendum in 2016 and also the lowest level since 2013 with 71% of YouGov survey respondents expecting an economic depression or recession within one year. 49% of the respondents also intended to cut spending.

Meanwhile, GfK Consumer Confidence Index had indicated a steep decline from -9 in first half of March 2020 to -34 in the second half. Such a drop, last seen during the 2008 GFC, was driven by decreasing confidence in individual financial security and concerns over the economy, echoing the YouGov survey findings above.