James Flynn analyses why the government’s proposed changes to higher education in response to the Augar review are regressive in nature, benefiting those on the highest incomes most.

Last week the Department for Education finally announced its response to the Augar Review. It had been a long time coming. 1001 days had passed since the review was published in May 2019.

Among the headline announcements were minimum entry requirements for accessing student loans, a reintroduction of student number controls on low-quality courses, and a reduction in fees for foundation years.

But I want to focus on the announcements surrounding student finance. As, reading the proposals, they highlight how difficult progressive reform of the student loan system is.

To note - throughout this article I use ‘progressive’ to mean that the change will benefit those on lower incomes, at the expense of those on higher incomes. And by ‘regressive’ I mean the opposite.

This two-party contribution is baked into the loan system, where the RAB charge (the proportion of loans the government expects to be written off) was intended to be around 30% when £9,000+ fees were brought in, but is estimated to be around 53% today. Under these new proposals, the RAB charge is expected to drop to around 22% - meaning the target is for 22p of every pound lent written off after 40 years.

But going into the proposals, freezing tuition fees at £9,250 for three more years may on the surface be welcome to students (considering the direction of travel since their introduction has only seen fees go up and up). But this means that, due to inflation, your university has far less to spend on your university experience (due to spiralling inflation, keeping fees at this level means they will be worth around £6,000 in real terms by 2025). That means less money to spend on library resources, on mental health services, on things that students value outside of their core courses.

Moving on to the student loan repayment threshold - the point at which any earnings over and above this threshold are subject to loan repayments - reducing from £27,295 to £25,000. Under this, the lowest-earning graduates (who never earn £25,000 throughout their careers) don’t see any change as they still repay nothing, and graduates earning between £25,000 and £27,295 go from paying nothing to paying something.

It is the graduates on middle incomes, who don’t pay off all of their loans but make a lot of repayments, who see the biggest change. The House of Commons Library recently modelled this change, and it found middle earners see the largest increase in repayments, repaying an additional £4,000 over the course of their (in this model, 30 years) term. There would of course be even higher contributions under the proposed 40-year term.

Student loans are subject to a 30-year repayment term - after which any debt left unpaid is forgiven. The proposal extends the repayment term to 40 years, and is perhaps the most straightforward to explain as nobody actually benefits from extending the term.

This extension means an applicant deciding whether to fill out their UCAS form at age 17 – starting university at age 18 and graduating age 21 – will have made a decision that may affect them financially right up to the age of 61. It’s effectively a whole-working-life commitment and an unreasonable expectation to place on young people.

Finally, capping of interest rates. This is probably the most popular reform proposed by the government. Interest rates are unpopular – particularly as they apply during study. Under the current system, interest is in line with the Retail Price Index and then increases to RPI+3% when the graduate earns above the repayment threshold. The new proposal is to keep interest rates at the RPI level regardless of income.

While that is a welcome change – it is not progressive. As all it does is reduce the amount owed (and eventually paid off) by the most wealthy graduates. The same groups above – middle earners who make 30 years of repayments yet don’t pay the loan off in full, and the lowest-earning graduates who never make a repayment – owe a little less money but ultimately don’t see much of a benefit.

How Regressive Is It?

Taking these policies on the student loan system as a package, students will receive a much-reduced student experience and while paying far more throughout their lives to account for it.

On top of this, according to the government’s own impact assessment, the additional repayments primarily fall on low-earners and women, with the highest-earning graduates, primarily white men, benefiting from the changes (not all white male graduates – just the wealthy ones).

The Institute for Fiscal Studies modelled the proposed changes and found that earnings will be negatively affected for all but the top 40% of earners - with the third most deprived group losing close to £30,000 of earnings across their lifetime (remember the lowest-earning groups won’t be meeting the repayment threshold until much later in their careers than middle-earners - if at all).

Meanwhile those in the top 10% gain the most from the reforms - close to £25,000 across their lifetime. The changes act like Robin Hood in reverse. 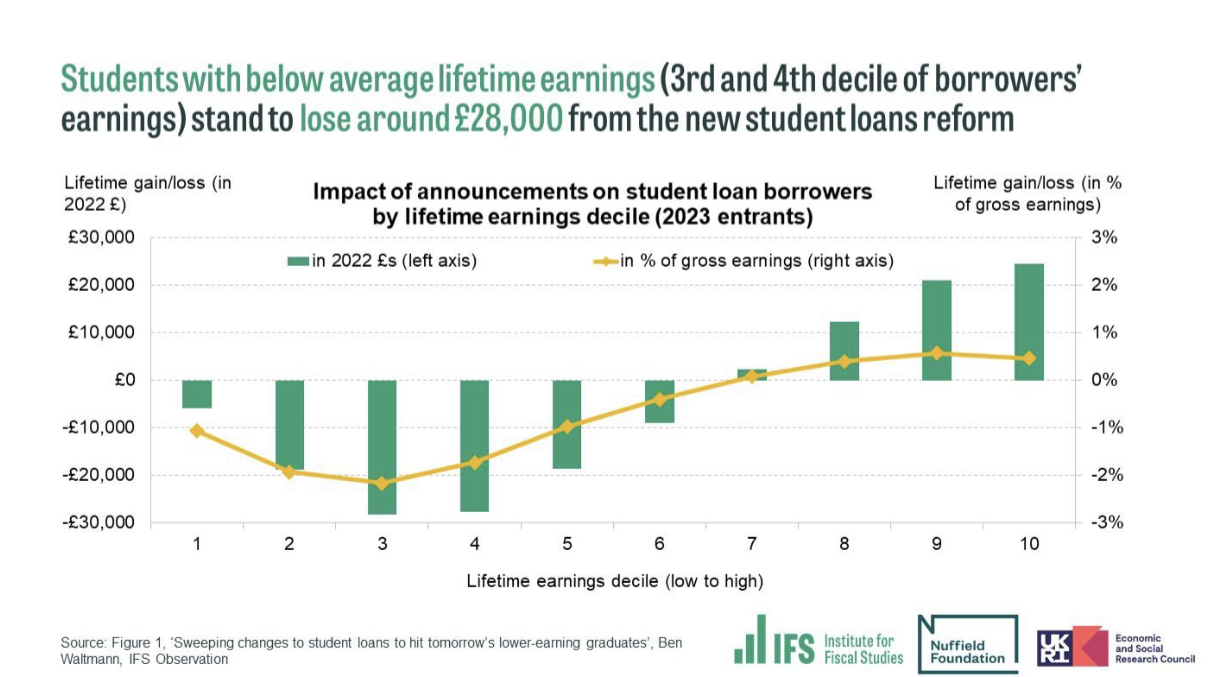 That is, by definition, a regressive package.

But anyone going into the Augar response and expecting genuinely progressive reform was always going to be disappointed. The government has long said that the current system does not offer value for money, the RAB charge is too high, and the direction of travel was always to claw back more money from graduates. That means those who have not been repaying their loans in full making more repayments.

Reform along these lines was always going to mean people on middle and lower incomes paying more - it’s just we have a system where the levers you can pull to make lower and middle-earners repay more, are the same levers that make the richest graduates pay less. And that makes genuinely progressive reform of the student loans system incredibly difficult.

James Flynn is Policy Officer on the Young Fabians Education Network. He works as a Policy Analyst at a West Midlands university. He tweets about Higher Education policy at @JamesFlynnHE.