In a 5-4 penalty shootout win over Serbia to qualify for Euro 2020, Scotland qualified for its first major football tournament since 1998. As the nation is swept up in veil of sporting patriotism twinned with the alienation of Westminster politics, it is evident that the economic roots of Scotland lies in the same long term, trends – industrial decline, insecurity and the squeezed middle class – that have bred anti-establishment rebellions across the West.

Scotland in 2021 feels like a different place from Scotland in 2014. The latest results from the YouGov poll and a No-Deal Brexit have entrenched the idea that a small, country in the North Sea with a population of 5 million tries to reclaim its autonomy after 400 years.

At this moment, the country’s sporting success feels more pertinent to its nationhood than at any point in contemporary history. Indeed, such patriotism does play an overwhelming part of any political debate: much more than a grey headline with the word’s “deficit” or a pie chart with the label “debt” written next to it.

The Government Expenditure and Revenue Scotland (GERS) is exactly that: obscure, insipid and dull in its nature. Laced with badly formatted graphs; it is, however, the most authoritative publication that helps to form part of the answer to that one question: can Scotland afford independence?

Of course, like all fiscal publications it does not answer all questions related to Scotland’s balance sheet alone:

Acknowledging these points of contention, Scottish civil servants have confirmed that GERS is a National Statistics publication. Hence. it is "produced independently of Scottish ministers and has been assessed by the UK Statistics Authority as being produced in line with the Code of Practice for Official Statistics. This means the statistics have been found to meet user needs, to be methodologically sound, explained well and produced free of political interference."

Based on GERS, and controlling for other factors, such as debt obligation and monetary independence, Scotland is in a tricky fiscal situation given its implicit budget deficit in the fiscal year (FY) 19/20 was much higher compared to the rest of the UK.

Scottish revenue per capita between Scotland and UK is a key driver which contributes to Scotland having an adverse net fiscal balance compared to the UK.

If we were to exclude direct tax the average Scottish person pays, on average, more tax than the average person within the UK. However, when income taxation is factored in, this alone then leads to revenues per capita in Scotland, even including those from the North Sea, to be around 2.5% below the UK average (£12,058 versus £12,367). The difference in income tax alone accounts for the gap.

Turning to the nation’s natural assets, when faced with a protracted slump in oil prices, a hastening climate crisis, and declining GVA across the carbon sector, Scotland’s historic relationship with fossil fuels is no longer the gem it once was. Scotland cannot rely on North Sea Oil for its tax receipts to ensure it remains fiscally sustainable. UK North Sea revenue declined by £85 million in FY15/16 and revenue has since increased, reaching £1.2 billion in FY18/19 but fell again in FY19/20. This fall is driven by global oil prices, the sterling dollar exchange rate, rising production costs such as, operating expenditure and capital investment. The dip in FY19/20 is caused by reduced demand coming from Covid-19.

Figure 1: Overview of Scotland’s contributions to the Exchequer 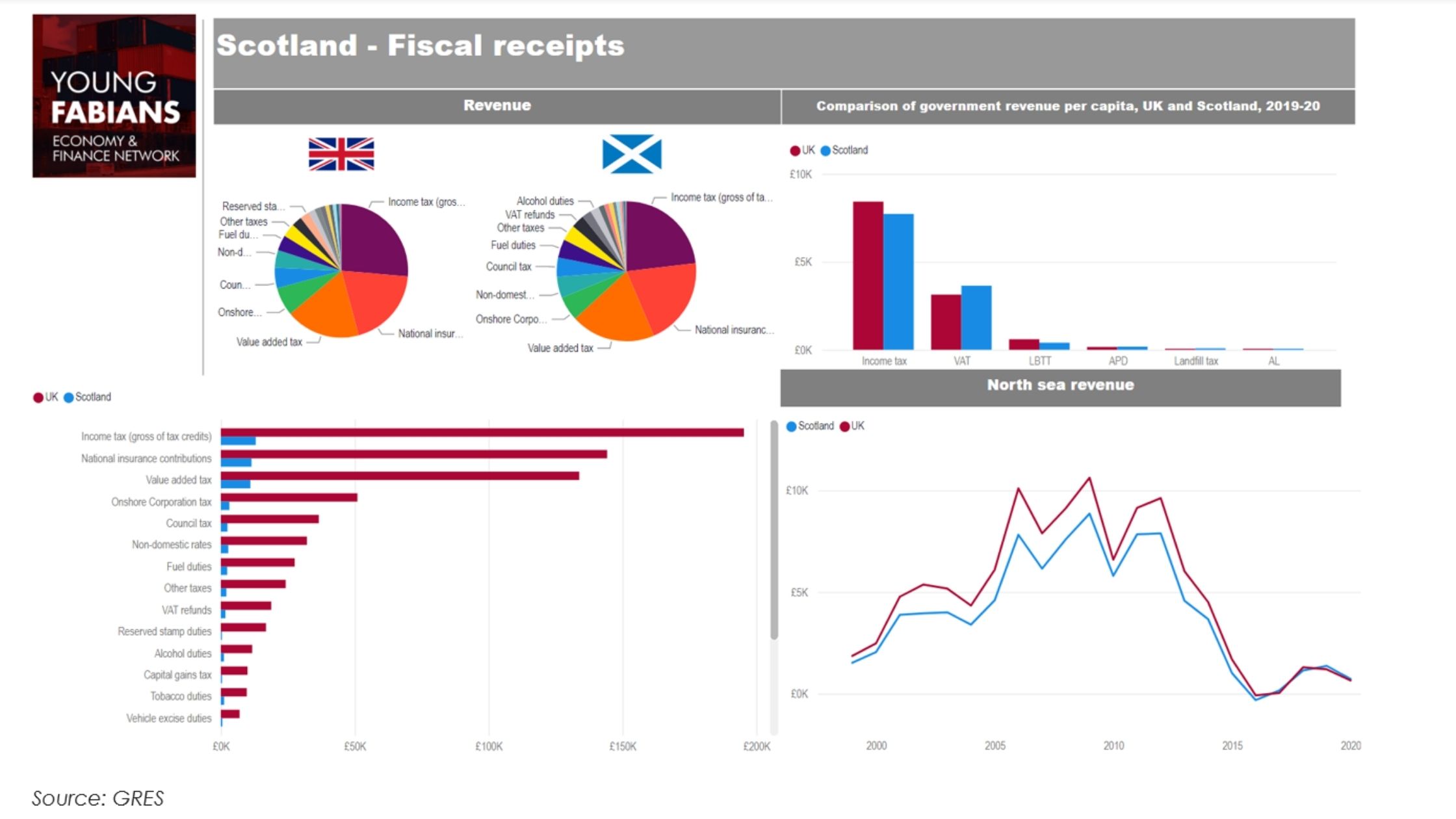 In Scotland, the combined effect of lower government revenue and higher government spending has led to Scotland’s deficit to be £11 billion higher than the UK.

Turning to expenditure, government spending per person on behalf of Scotland has been £14,829 per person. This is 12% greater than the UK average at £13,196. This difference is explained by spending on public services that are largely devolved to the Scottish Government. Such services include expenditure on transport, housing, and culture, where it is 29% higher. Further, for education, spending per person is c22% greater in Scotland, than it is within the UK.

In effect, borrowing is £855 per person across the UK compared to £2,776 per person in Scotland.

Figure 2: Overview of Scotland’s contributions to the Exchequer 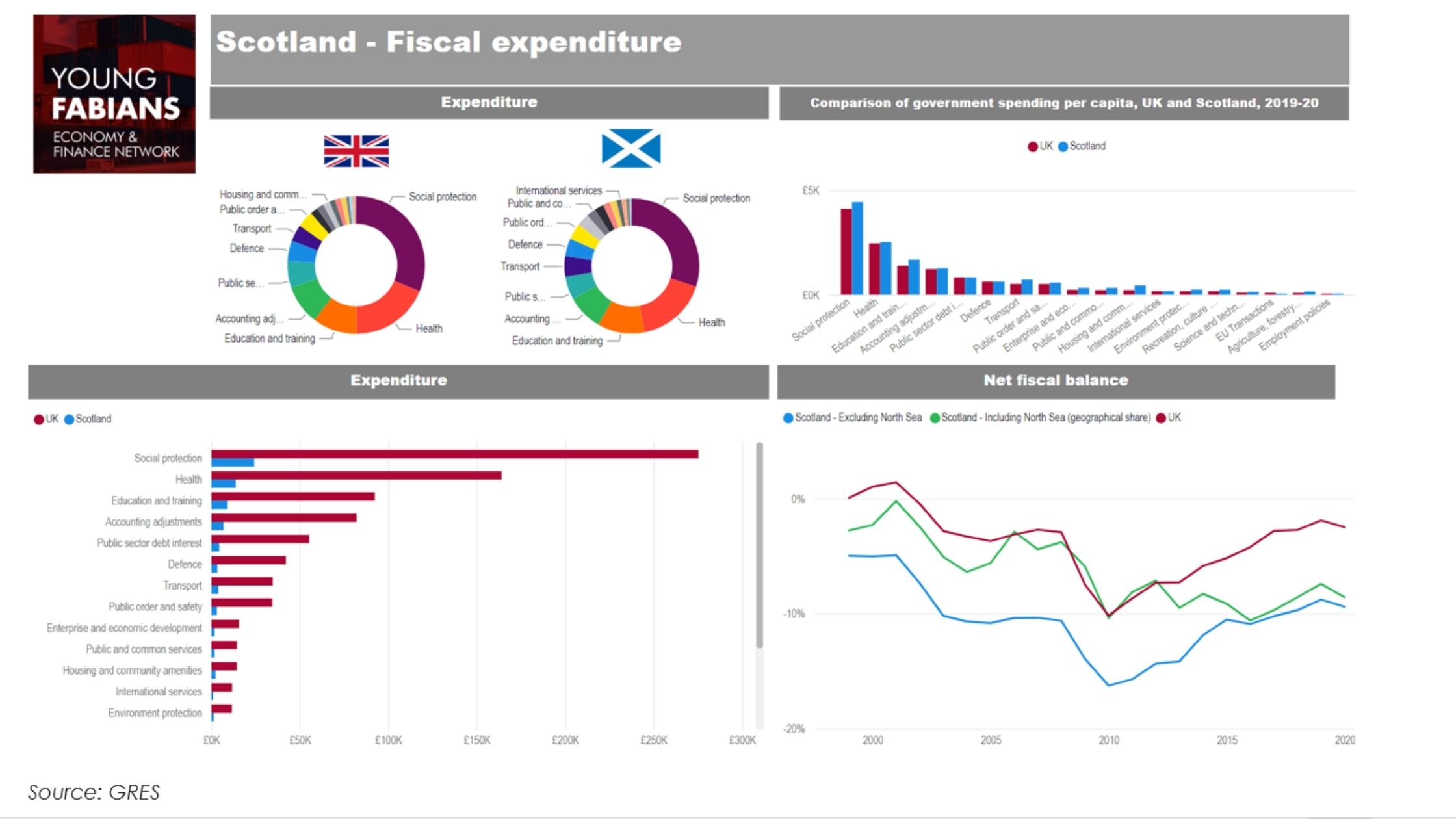 Assuming that Scotland is now independent, and that its public finances were expected to move in line with the Office of Budget Responsibility’s (OBS) Central Scenario for the UK, this would mean that Scotland’s implicit budget deficit would reach c. 27% of GDP FY20/21.

The impact of the above, upon comparing Scotland to the rest of Organisation for Economic Co-operation and Development (OECD) countries is that Scotland would be the worst hit developed country. The impact of this is substantial. It is unlikely that a small country could sustain a deficit of this size even within a pandemic.

For the purpose of comparison, the rest of the UK will also be adversely affected by this increase in government borrowing. However, the UK can mitigate its affect by taking advantage of the Bank of England’s quantitative easing measures to lower the cost of issuing debt.

In summary, it is unlikely that a country as small as Scotland can withstand a deficit of 27% of GDP. When considering that, normally, any new EU country is allowed 3% of borrowing (according to the European Commission’s Excessive Deficit Procedure (EDP)) Scotland will have to take severe measures to address its rate of borrowing. The world’s newest country would then need to enforce draconian measures of cold soup austerity to even be considered to join this exclusive club.

Figure 3: Comparison of budget deficit in the developed world: Scotland topping the charts 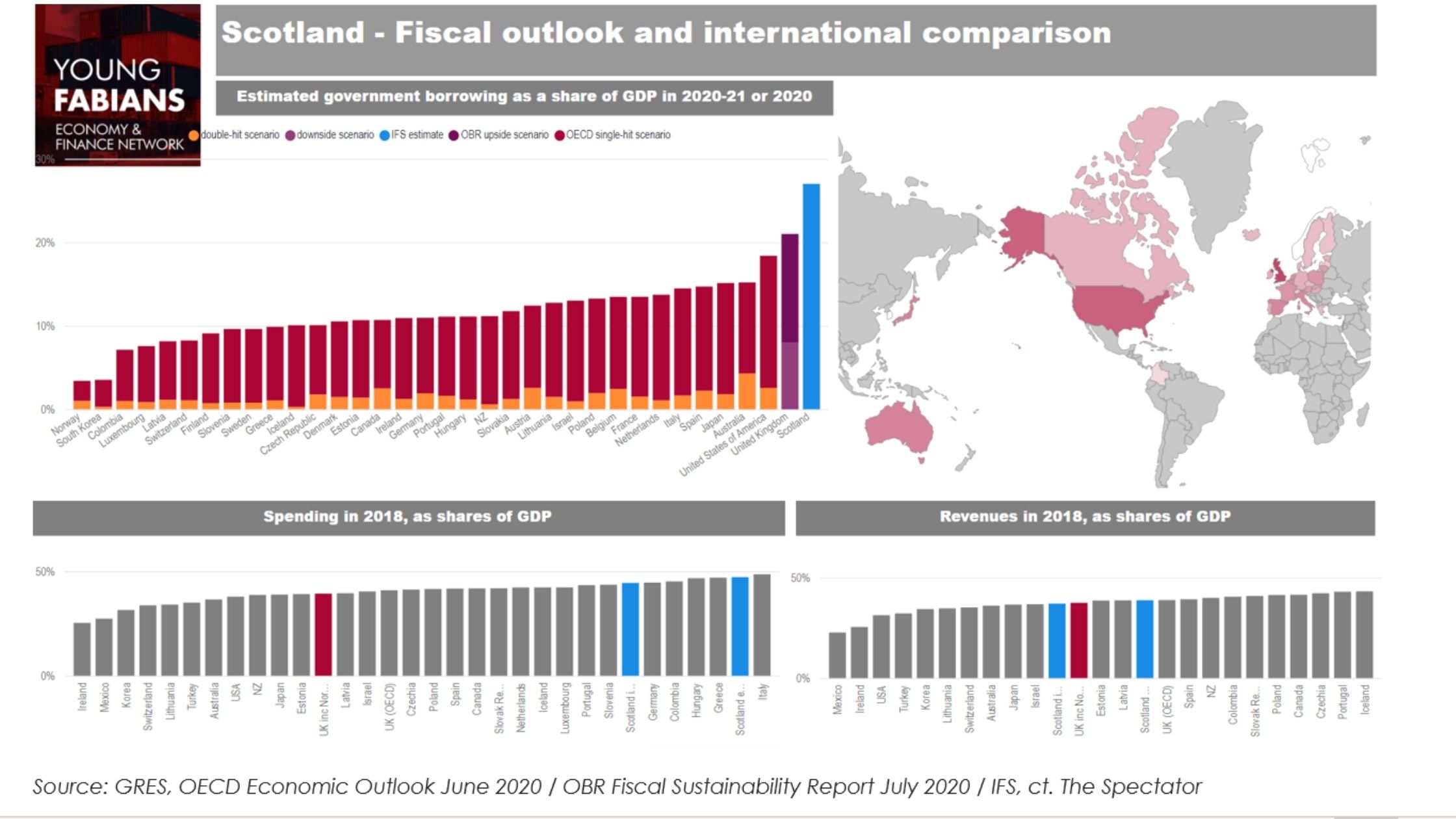 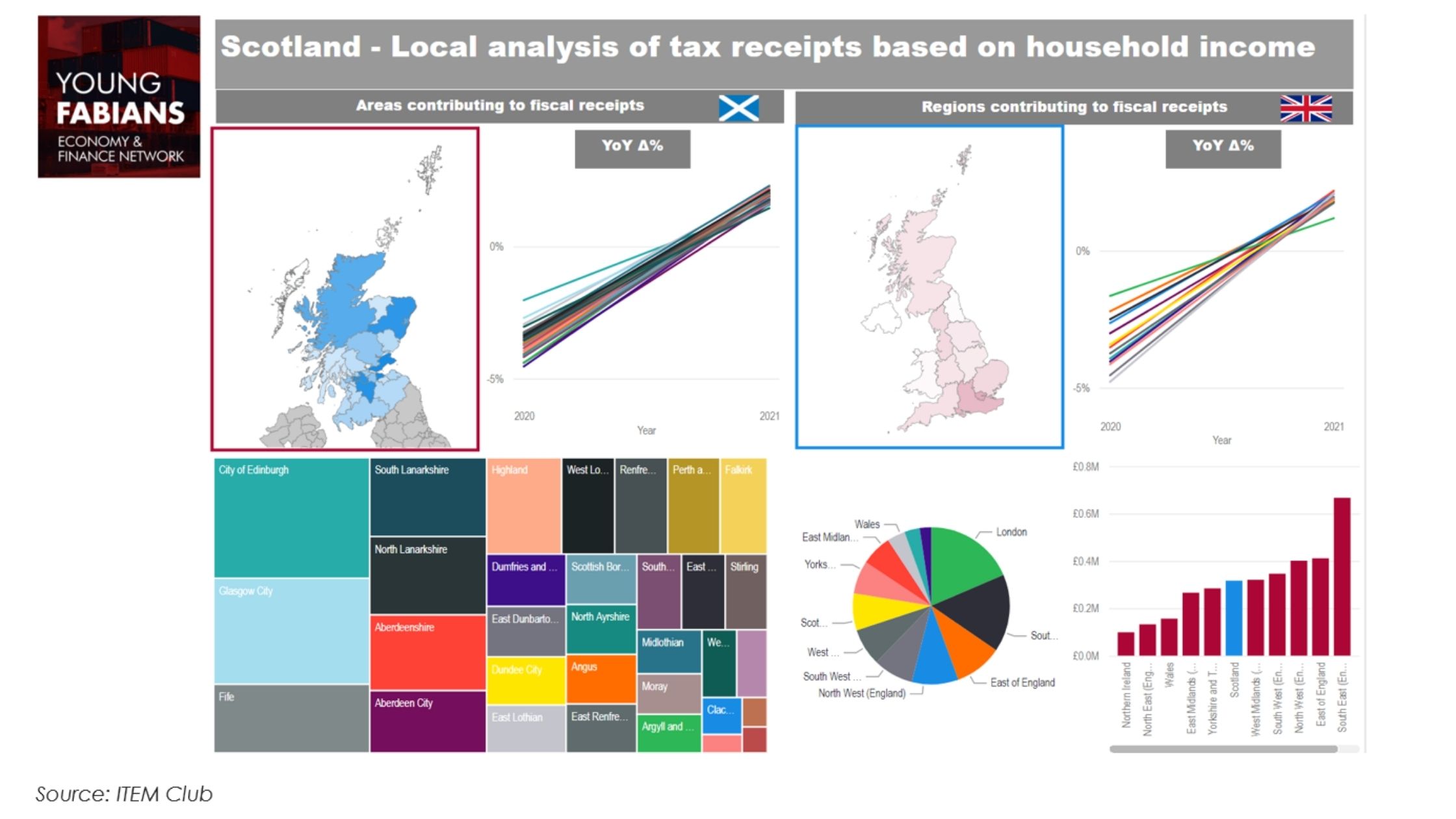 One opportunity for policy makers in Scotland to increase fiscal tax receipts is to encourage the number of contributions by household. Observing the greatest fiscal receipts, based on direct taxation, in absolute figures, they tend to come from urban areas. Unsurprisingly, the largest amounts come from: Edinburgh, Glasgow and the Kingdom of Fife. In contrast, the smallest contributors of direct tax come from the islands. Nevertheless, as local authorities, the latter boast to have the fastest rate of annual growth in tax revenues in FY20/21.

At the UK level, comparing Scotland to other devolved nations, including Wales and Northern Island, Scotland has greater levels of tax contributions. However, upon comparing the annual growth rates, Scotland’s rate is slightly lower. It is worth noting that the deficits of Wales and Northern Ireland will almost certainly be even higher than Scotland’s. This reflects their lower levels of gross value added (GVA) output, higher government expenditure and fewer receipts to the exchequer.

On 14th June, 2021 Scotland walked it alone against the Czech Republic at Hampden Park, Glasgow. And for all their nationalist fervour, Scotland were, according to world rankings, 21st of 24 nations at Euro 2021. The betting odds were correct, in favour of their 11th consecutive first-round exit. Similarly, if Scotland chose to walk it alone internationally, it could be the worst hit developed country within a league of thirty-seven other OECD countries. Indeed, the economic and geopolitical advantages of being a larger country offers some advantages that a small country cannot match.

To suggest that Scotland is too small or too poor to be independent is ludicrous. Clearly, this nation is one of the most inventive on Earth – it’s land abundant with natural resources and its culture rich. But on the exam question alone, can Scotland Afford Independence? For now, the evidence on the table points towards an independent Scotland to impose a toxic concoction of either much more tax, or much less spending. Denying this reality is unfounded.

This publication was authored by Amarvir Singh-Bal, Chair of the Economy and Finance Network. Amarvir now works as a Senior Economist within the City.