In Defense of Pragmatism

Some have accused Joe Biden of being too prudent on economic policy; others have derided his agenda as point-scoring. Both are wrong.

America is in unchartered territory. In the midst of the worst recession since 1930, former free-market absolutists have conceded that the central government does, in fact, play a vital role in the nation's social wellbeing. Congress passed the Coronavirus Aid, Relief and Economic Security (CARES) Act with little opposition. The Act will cost the taxpayer over $2 trillion, according to the Treasury[1]. Ironically, its  staunchest advocates are the very people who derided President Obama as a communist when he introduced a comparable suite of measures.

The CARES Act’s primary goal is to address the greatest issue facing the US economy, mass unemployment. It is a Herculean task: the official unemployment rate currently stands at 11.1%, the highest in modern history. Worsening matters is the mass closure of small and medium businesses. To avoid further mass redundancies, the bill includes a 50% credit on up to $10,000 of workers’ wages. It also includes the Payroll Protection Program, a $659 billion job-retention scheme on par with the one British Chancellor Rishi Sunak announced in March.

A nation founded on devout scepticism of the government’s role in the economy has changed its mind. 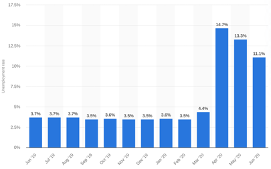 Data from Statista.org shows a sudden increase in unemployment in March. Though the rate has since decreased, to 11%, it is still dramatically above pre-crisis levels.

Now faced with spiralling unemployment and lost social progress, Americans are demanding change. The rise of self-professed “democratic socialists” and protectionist Republicans in local office is illustrative of this shift. Data from Gallup, a polling agency, show growing support for socialism and scepticism of capitalism, particularly among the young[2]- and this is in a nation in constant conflict with left-wing radicalism both at home and abroad. The political cost of inaction has grown tremendously- as has the dividend on demanding radical reforms to America’s crumbling economic structures.

This election is thus a historic opportunity for seismic social and economic change. But will America rise to it?

Joe Biden is campaigning on faith that America- still the world’s most influential democracy- will use this unprecedented turmoil as an opportunity to take concrete steps to rejuvenate its struggling economy. In doing so he envisions the nation taking drastic steps to address the pressing issues which make renewal so necessary. What makes Biden such a credible voice on this matter is that he’s led this kind of operation before. His agenda exemplifies the same cautious optimism that pioneered the Obama administration’s landmark Recovery Act of the disastrous 2008 financial crash. Despite rigid opposition from Republicans, the Act oversaw the investment of over $831 billion[3] into the nation’s dilapidated infrastructure. According to the Council of Economic Advisors, this provision didn’t just prevent further mass unemployment- it also created over 2 million new jobs in its first year. The Act introduced a renewed focus on tackling the sobering levels of social deprivation with around $40 billion in SNAP (Supplemental Nutrition Assistance Program) benefits. Such a substantial investment in the nation’s welfare provided vital in the recovery effort; it reduced levels of food insecurity by 2% for the very poorest citizens and protected over a million more from entering poverty within its first year.

To address this new crisis, Joe Biden has proposed an even more radical suite of policies.

Chief among them is a proposed $2 trillion “green infrastructure” plan. Like this century’s greatest Democrats, Biden understands the urgent need to address climate change; like the greatest Democrats of the last century he also understands the equally urgent need for the US to show global leadership on the issue. To this end, Biden has committed his administration to the most ambitious agenda since FDR’s New Deal drastically transformed America 90 years ago.

According to his campaign website, this policy will create “millions” of well-paying jobs, providing the economy with the stimulus it urgently needs.

Additionally, Biden intends to revitalise the nation’s auto industry with far-reaching grants and tax incentives. His campaign claims this policy will create “one million” well-paying jobs. Despite opposition from the more radical environmentalists in the Democratic party, the fossil fuel-dependent auto industry is a critical component of a modern market economy. The industry still employs almost 10 million workers[4]- convincing them to vote Democrat in November will prove vital if Biden is to win those Mid-Western swing states. Even if this support scheme doesn’t reach Biden’s goal, revitalising America’s struggling[5] auto industry will prove instrumental in the nation’s recovery. Neglecting the sector will greatly jeopardise the nation’s efforts to compete with an ever-potent China.

His plans for funding these gargantuan efforts through raising income tax rates is also a break from tradition: politicians of both main parties have repeatedly shunned tax increases. Biden plans to reverse the Trump administration's costly tax cuts; his government would return the top income tax rate- currently 37% of earnings- to 39.6% and increase the top rate of corporation tax to 28% of profits. Moreover, the infamously moderate Joe Biden seems to have gained a degree of social-democratic radicalism from his former opponent, Bernie Sanders, a devout advocate of sweeping change. This is apparent in the Democratic nominee’s advocacy of a 15% tax on the book income of large companies (whose net income is at least $100 million).

Such sweeping reforms to America’s regressive tax system would prove controversial. Barack Obama was cautious to increase taxes on high earners because of vehement opposition from conservative partisans. But such measures are necessary for funding Biden’s far-reaching Keynesianism while keeping a vigilant eye on the deficit (currently $1.1 trillion[6]).

These plans will come at a tremendous cost: over $2 trillion for his long-term “green infrastructure” agenda and $700 billion[7] for the short-term economic recovery. But this is  a price worth paying. The cost of inaction- in the form of lost jobs and livelihoods- is far greater.

[1] The Treasury has claimed this Act is in the interest of “all Americans”: https://home.treasury.gov/policy-issues/cares

[3] According to this document from CBO: https://www.cbo.gov/sites/default/files/cbofiles/attachments/02-22-ARRA.pdf

[4] Data from the Auto Alliance:  https://autoalliance.org/economy/#:~:text=Auto%20Employment&text=A%20robust%20auto%20manufacturing%20sector,percent%20of%20private%2Dsector%20employment.

[5] Deloitte, a professional services network, warns of a “prolonged truncation in consumer demand” due to the covid-19 lockdown.

[7] This is according to the Washington Street Journal: https://www.wsj.com/articles/biden-looks-to-curb-covid-19-economic-damage-with-buy-american-plan-11594287005