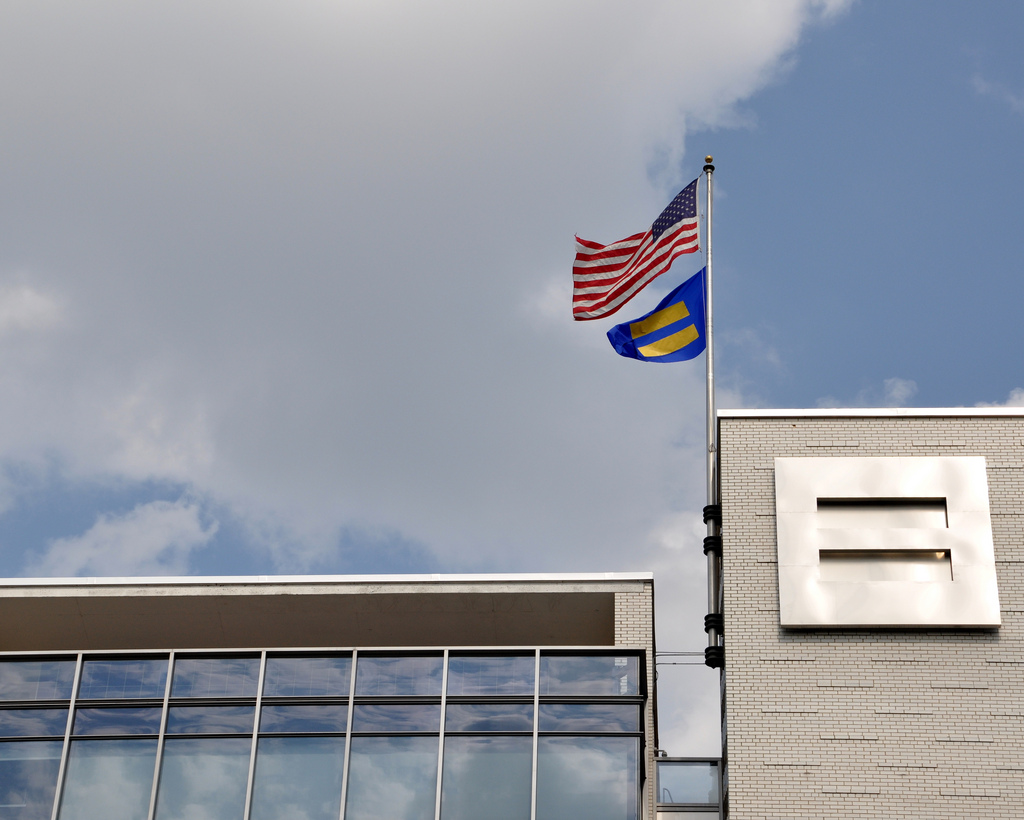 Day 4 of the Young Fabian Delegation to the United States started with a key meeting in the heart of the nation's capital: Washington DC. The HRC (Human Rights Campaign) represents the rights of LGBTQ people across America, and their allies. Founded in 1980, the history of the HRC is fascinating.

The HRC was initially created as a 'PAC' (Political Action Committee) with the chief aim of funding campaign activity on behalf of LGBTQ people. Over the past 36 years it has taken on numerous functions, from multi-level government lobbying, to alliances with non-governmental organisations. Campaign activity focusses on a variety of issues: from religion, to faith, activism in the workplaces, healthcare etc.

The group had some challenging questions for the HRC team - Ty, Lauren and Ashley. Some of the answers were very revealing when it comes to the upcoming General Election in November. Primary activities over the upcoming campaign include phone and door-to-door canvassing, with a focus on 'getting out the vote'. And although, estimated on statistics, only 5% of the US voting population are LGBTQ themselves, this group is broadened (perhaps doubled) when you consider 'allies'. Getting out this vote and undertaking general outreach for pro-equality voters is a key activity for HRC. Their membership list is 2 million people strong, but 1.1m of these are allies of the community itself.

The HRC's presence across the United States is pretty staggering - they have offices in nearly every state with almost 200 staff directly employed by the organisation. But they also operate volunteer steering committees, both raising funds and influencing gay rights at a state-by-state level. Often times these committees include high profile individuals advocating for gay rights within their cities, regions and states. Their 'Voices Network' enables them to speak out across areas of America that currently still have weak legal representation and equality records, influencing incremental change on a daily basis.

Finally, the events of Orlando in June arose during the conversation. 49 gay men died in the Pulse nightclub attack this summer. Most of them were of Latino origin. Initial reaction to this attack was to cite terrorism, however current wisdom is increasingly that this was a hate crime, motivated only in part by Islamic Fundamentalism. This emerging narrative has energised and heightened the sense of concern within the Latino LGBT community, in states like Florida, encouraging them to unify yet further and become more engaged in politics - pushing for further immigration reform and potentially bringing the Muslim community together with them.

Concluding the meeting with the HRC, the delegation headed to another key group in the heart of the nation’s capital: the AFL-CIO (American Federation Labour – Congress Industrial Organisations) – founded in 1955. There, the group met with Working America, the political arm of the union to discuss their campaigning tactics, the plight of the working class into Trump’s hands and the future of unions in the USA.

Working America specialise in door step conversation with voters, particularly the white-working class, to engage with their issues and fears – not simply ask who they’re voting for. Undertaken by professionals rather than volunteers, the group use this information as a means to influence votes. With 75% of political advertisement in the US using the means of television, it’s the belief of Working America that speaking to voters is the best means of influencing them and having an impact upon the election. Asked what happens if Trump loses but Trumpism still remains, the simple answer for the union is to talk to more people and try and work with them for change.

Their conversations, so far, have led them to conclude that for many white working-class Americans, the “chaos guy” can appear appealing because there’s nowhere else to go. With a declining mortality age, no social security and their jobs moving overseas, a promise of a return to stability has been appealing. Trump rallies against issues such as free trade and damns the agreements as bad for America, Working America have found this quality of speaking his mind to be greatly popular amongst their voters - who believe he is beholden to no one, and the

Democrats corrupt due to their corporate sponsors.

Working America aim to unite with these people, with their discussions, to persuade them that Trump is not the answer but that unions are – people and unions can work together to fight for change against both Democrats and Republicans. Unions in the US still take in $20bn a year, but with the threat of new companies like Uber and the automation of the workforce on the horizon, Working America warned that if unions didn’t wake up that could soon be $10bn, and so on. With their power already limited through acts such as the Bipartisan Campaign Reform Act of 2002, limiting their ability to donate to political candidates, Working America warn the only way to ensure a future for unions is by engaging and working with the people to cause change in Washington.