What Do Russian Sanctions Mean for Us in the Rest of the World?

The Russian invasion of Ukraine in 2022 has sparked far stronger reactions from around the world vis-à-vis the annexation of Crimea in 2014.

As a starting point, the sanctions imposed in 2022 are more extensive in their extent and the number of countries involved. For instance, Japan, South Korea and Singapore did not sanction Russia over Crimea in 2014 while doing so in 2022.[1]

Moreover, the invasion has also united the EU and NATO’s resolve in applying economic sanctions and measures against Russia. For example, Germany stopped the approval of the Nord Stream 2 gas pipeline following the invasion, marking a change from its initial hesitation pre-invasion.[2] This move is particularly significant given that Germany now obtains 55% of its gas supply from Russia according to Economy Minister Robert Habeck.[3]Furthermore, Germany, Hungary and Italy also approved cutting off access to the SWIFT system for most Russian banks after initial doubts.[4]

The economic consequences of the invasion have also reverberated beyond Russia onto the rest of the world. One example is the downward revisions of 2022 growth by CNBC from 3.5% to 3.2% for the US and from 4.1% to 3.5% for Europe.[5] A recent Goldman Sachs analysis even indicated the probability of a US recession in the next year has increased up to 35%.[6]

There has also been an uptick in oil prices which increased to $114 per barrel on 25 March (a peak of $124 reached on 8 March) v $93 on 24 February pre-invasion amid sanctions, COVID-19 and war-related supply chain disruptions as well as import bans by some Western nations. 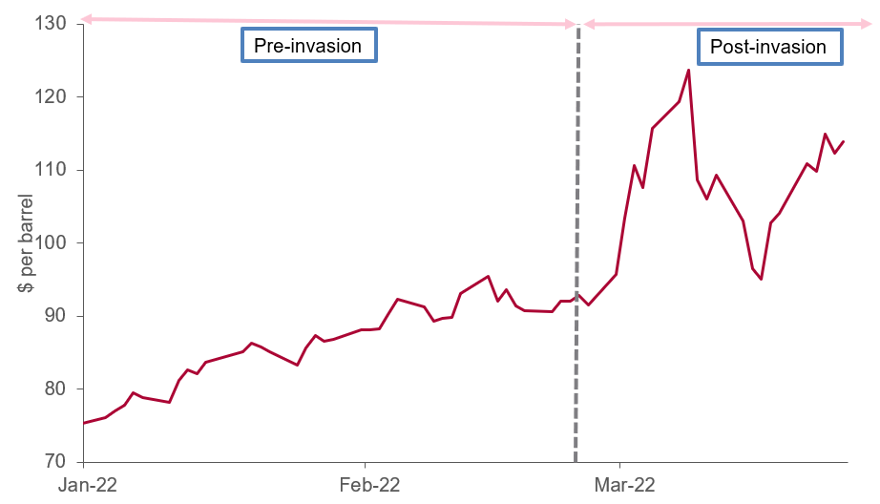 Besides oil, Russia is a major producer of commodities such as nickel, palladium, platinum (the latter two used for vehicle catalytic converter) and potash (fertiliser). Meanwhile, Ukraine is a major producer of titanium[7] and grain.[8] The supply chain disruptions caused by the invasion and sanctions have exacerbated worldwide inflation concerns with the example of US Feb-22 inflation being at a 40-year high of 7.9%[9]  while the OECD estimated impacts of c.2.5% on global inflation rate and (1.1)% on GDP growth.[10]

Given the inflationary concerns, Central Banks including the Fed and Bank of England implemented 0.25 percentage point base interest rate increases in mid-March. The question is therefore whether and how fast further rate increases will be so as to balance taming inflation and maintaining economic growth.[11]

Prior to the invasion, the UN global food index has already risen by higher than 40% over the last couple of years[12], driven by higher transport and energy costs, unfavourable weather trends, labour crunch and lower Russian exports[13]. The invasion and ensuing sanctions will impact the global food supply further because of disruptions to food production and Russian blockade of Ukraine’s Black Sea interrupting trade. With Russia and Ukraine contributing a combined 29% of global wheat production, the UN’s Food and Agriculture Organisation (FAO) warned the invasion could increase food and feed prices by between 8% and 20%. Estimates of the invasion’s impact on food poverty vary between c.10m by FAO[14] and c.40m people by the Centre for Global Development.[15] Some countries such as Egypt have requested IMF aid to weather the impacts of the rising grain and oil prices.[16]

Figure 2: Wheat prices per bushel pre and post-invasion (up to 25 March)

Beyond the economy, sanctions have impacted other areas of life including the West’s ban on Russian planes accessing its airspace and airports and vice-versa.[17]   Consequently, some flight times and fuel consumption have increased with the example of Finnair flight between Helsinki and Bangkok taking c.2h longer:

If the invasion were to drag on further, the scope and extent of current sanctions such as asset freeze and travel bans might be extended. The US and the EU are also seeking to regulate cryptocurrency to close potential sanction loopholes.[18]

EU countries might also consider cutting Russian oil purchases further and bringing forward their stated aim of phasing out Russian gas by 2030 if alternative energy sources were to be found.[19] As things stand, the process has started with some companies such as TotalEnergies looking to diversify away from Russian oil by end-2022 while others including BP, Shell and ExxonMobil have left Russia.[20] British Prime Minister Boris Johnson kick-started the West’s efforts to diversify oil and gas supplies by visiting Saudi Arabia and the UAE on 16 March to discuss increasing oil and gas supplies.[21]

Fully aware of Europe’s dependency on Russian gas, Russian President Vladimir Putin announced all gas payments are to be made in Ruble in order to (partially) prop up the currency.[22] EU leaders had since responded that payments will be made in the currencies stipulated in the contracts (i.e. EUR or USD).[23]

Other potential developments impacting the future direction of measures include the use of chemical and biological weapons during the invasion[26] and whether EU members can agree on common measures. The latter factor has been evident from the onset of the invasion when Germany, Italy and Hungary were the last EU countries to oppose Russia’s removal from SWIFT. Further developments will also hinge on whether the Ukraine-Russia negotiations bear fruits including the possibility of Ukraine becoming a ‘neutral’ country in exchange for legally binding security guarantees.[27]

Going forward, it is likely for a different attitude towards receiving Russian investment (e.g. in property) to prevail in the West and vice-versa which will far outlast the invasion. This comes amid the Kremlin considering moves to nationalise properties belonging to Western firms who have left Russia.[28]

Outside the sphere of government, more companies might also withdraw from Russia given that some such as Acer, AstraZeneca, Decathlon and Glencore are still operating in Russia as of 26 March.[29] Complete withdrawals from Russia might be complex for firms including M&S, Burger King and Marriott due to complications in their franchise agreements and ‘refusals’ from local partners to shut down operations.[30]

Beyond the short-term horizon, a likely long-term implication of sanctions is the deepening of Russia-China bilateral ties. At the time of writing, major Russian banks are considering the use of China’s UnionPay to replace Visa and Mastercard[31] and reduce their reliance on the USD for international trade. Being shut off from SWIFT could also encourage more Russian banks to join the China National Advanced Payment System (CNAPS).[32]

Regarding energy, China is mulling over investing in Russian energy and commodity companies. [33] On 4 February, China National Petroleum Corporation signed a 25-year deal with Gazprom to supply an additional 10bn cubic metre of gas per year. [34]

Despite the possibility of enhanced ties, China is aware of its limitations due to the possibility of breaching Western sanctions which will hinder their access to Western markets. [35] The US has also warned China about repercussions in the event the latter extends financial and military aid to Russia which might impact Beijing’s calculus.[36] It also takes time for China to purchase the oil and gas which would otherwise have been sold to the West because of the time requirement for building a new pipeline. [37] The invasion has also raised the possibility of China as the holder of the world’s biggest foreign reserves re-considering its position on the reserves in the aftermath of the West’s sanctions on the Russian Central Bank reserves.[38]

Historian and author Yuval Noah Hariri also argued the invasion will have long-term ramifications on countries’ perceptions towards defence expenditure and arms supply to other countries. [39] For instance, Germany has increased defence spending from 1.5% to at least 2% of GDP in its 2022 budget. [40]

Based on the above, it is clear sanctions have had extensive consequences on ordinary people outside Russia such as inflation rising worldwide, global stock market jitters and tit-for-tat airspace closures.

It is evident sanctions entail a price to pay so governments around the world need to be open and honest in their communications to the public about the costs of sanctions and assist in mitigating their impacts.

Beyond sanctions, the invasion has had a staggering toll on Ukraine with more than 3.3m people having left the country[41] and 1,500 civilian deaths[42] as of 19 March. Its economy is projected to decline between 10% and 35% in 2022 if the war becomes prolonged.[43] The world is also set to see a spike in food poverty the longer the invasion goes on.

Hence, there is a need for more concerted aid efforts from wealthier nations and international organisations (e.g. the IMF and World Bank) to help Ukraine and countries facing higher food poverty.

(*) Note: While every effort has been made to keep the article accurate and up-to-date until the date of publication, there might be errors and omissions due to the fast-moving nature of the events (amongst others). As such, please perform further research for the latest developments.

Chris is a former Co-Chair of the Young Fabians Economy & Finance Network who maintains a keen interest on geopolitics. He currently works as Strategy Consultant. Chris is writing this article in his personal capacity and all views expressed are his own.

[12] How Russia's invasion of Ukraine is tearing apart the global food system, The Straits Times, https://www.straitstimes.com/world/how-russias-invasion-of-ukraine-is-tearing-apart-the-global-food-system

[15] Mitchell, Ian, Hughes, Sam and Huckstep, Samuel, Price Spike Caused by Ukraine War Will Push Over 40 Million into Poverty: How Should We Respond?, Center For Global Development, https://www.cgdev.org/blog/price-spike-caused-ukraine-war-will-push-over-40-million-poverty-how-should-we-respond

[19] Weise, Zia and Wanat, Zosia, Commission plans to get EU off Russian gas before 2030, Politico, https://www.politico.eu/article/commission-plan-eu-russia-gas-2030/

[20] White, Sarah and Agnew, Harriet, TotalEnergies to phase out buying oil from Russia by end of year, Financial Times, https://www.ft.com/content/a7263347-f2c2-425b-85d7-0bcbd0091e52?fbclid=IwAR1ArlT-0LzYn3xJ3Wlbt0DcZBxQPdC6NSzsIn_tRQP8zWkYjDqP3MyiOkc

[29] Over 450 Companies Have Withdrawn from Russia - But Some Remain, Yale School of Management, https://som.yale.edu/story/2022/over-300-companies-have-withdrawn-russia-some-remain?fbclid=IwAR0EBwk2017qHG72ksirKsq_jJ3T3pUWjg8hM9CmYzQ-EhOfMeQmWqVUy3Q

[37] Johnson, Ian and Huang, Kathy, Why China Is Struggling to Deal With Russia’s War in Ukraine, Council on Foreign Relations, https://www.cfr.org/in-brief/china-russia-war-ukraine-taiwan-putin-xi

[40] A big defence budget shows Germany has woken up, The Economist,  https://www.economist.com/leaders/a-big-defence-budget-shows-germany-has-woken-up/21808225

[41] Haseman, Janie, Millions of Ukrainian refugees are fleeing: Where are they going?, USA Today, https://eu.usatoday.com/in-depth/graphics/2022/03/19/millions-ukrainian-refugees-fleeing-where-they-going-ukraine-war/7034809001/