Euan Saunders discusses the innovative and widescale development of social housing in Europe and the rental regulations in Europe.

The UK is facing an unprecedented housing crisis. House prices continue to grow, and banks have exacerbated the problems by reeling back on their more accessible mortgage products. Without the help of the “Bank of Mum and Dad,” many can only dream of home ownership. In addition to this, the public and private rental market is squeezed heavily, and thus we need to utilise the state’s powers to build up, and out. By channelling the work of our European neighbours and Britons of the past, we can develop mass social housing, to reduce pressure on the private sector and provide a viable, attractive, and affordable, alternative.

The Conservative’s dogmatic commitment to home ownership and market forces has resulted in a refusal to address the crisis head on. A rise in housing supply must occur now, and quickly, if the UK is to go any way to addressing the issue. Despite their promise of 200,000 starter homes, analysis from the National Audit Office concluded that since 2015 none of these houses have been constructed. To worsen matters, of the 130,000 homes planned since 2015, only 20,000 are deemed affordable, making it even harder for potential buyers.

What’s worse, because of the ideological commitment to home ownership, since 2010 the government has introduced a range of banking products which have inflated the value of properties, without dealing with the core issue of supply. George Osborne’s help-to-buy ISA provided savers with government top-ups to the tune of up to £1000 a year and Boris Johnson has recently followed suit, announcing his intention for bank-led 95% mortgages. These mechanisms worsen the situation, rather than alleviate it.

If the government were to shake this commitment to home ownership, and empowered local authorities to invest in social housing, Britons could again have another viable option to home ownership, which would be beneficial for all aspects of the market – renters, buyers and sellers. Most notably, the length of the social housing waiting list is well documented, and easing this stress, and then some, would provide a reprieve for those struggling to find a rental property, or for the key workers priced out of home ownership, rebalancing the housing system.

Developing wholesale social housing in the UK was once a bipartisan ideal. After WWI, the Conservative-led coalition government created “homes fit for heroes,” 500,000 council properties for ex-servicepeople. Many of the estates constructed under this Act remain standing today – well past their expected sell-by date, yet in good condition. After WWII, the Labour government introduced the New Towns Act, which created now thriving centres such as Milton Keynes and Warrington, and provided 750,000 council houses quickly, and to a high standard.

Yet these policies have fallen by the wayside in recent years when compared with our European counterparts. Since the infamous right-to-buy policy introduced under Margaret Thatcher’s government, a stigma has been attached to “council estates,” becoming a source of derision. It does not have to be like this, however. In Vienna, affordable and well-developed council housing is the norm for many, with 60% of the residents living in 440,000 social housing developments, all owned by local government and non-profit enterprises – not outsourced to speculators who cream profits and sell quick. This social housing is not the source of ridicule it is in the UK, but is an attractive option for all. The buildings often have self-contained gyms, shopping centres, nurseries, and schools, saving time and money on unpaid care work – a real issue in today’s society. 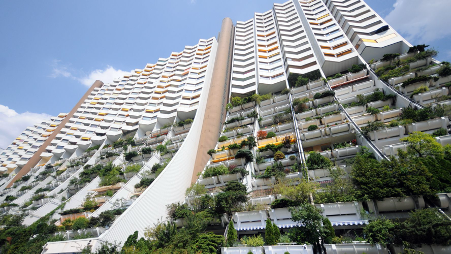 But if the UK were to develop a true social housing sector, increase in supply must come with the development of pro-tenant rental regulations. Seemingly trivial tenant rights such as the ability to have pets are commonplace in Europe yet in Britain are non-existent. Less trivial is a rent control policy in France, which matches rental increase on properties to the Rent Reference Index, protecting tenants from sudden increases. The French also prevent eviction throughout winter, a real humanitarian support, with the Germans permitting lifelong tenancy agreements which children can inherit, providing true security and the ability to settle down in rented accommodation. Conversely, in England, tenants are at year-round risk of falling foul to section 21 – no fault evictions.

If our government were willing to place the tenant at the forefront of their mind, we could alleviate stress on all aspects of the housing market. With strong, pro-tenant regulations, coupled with inspiration from Labour’s class of 1945 and the Viennese developments, central government could empower and fund our local authorities, who know their areas better than any, to produce widescale and affordable housing for rent, with intelligent use of existing brownfield and greenbelt space, as well as new build areas. This would be the antidote our housing market so desperately needs – providing a viable and attractive alternative to the American-imported ideal of the house with a picket fence.

Euan Saunders is a recent graduate of History from the University of Edinburgh. He is currently interning with a  Labour MP and has a range of policy interests from devolution, to transport, to housing development.