Can You Make the Student Loan System Progressive?

Following on from his last article on the goverment’s response to the Augar Review, James Flynn assesses whether student loans can be progressive, and what other alternative systems exist.

In February the Department for Education finally announced its response to the Augar Review. I recently wrote for the Young Fabians blog about the announcements around student finance, why the proposals are a regressive package, and how difficult it is to reform the student loans system along progressive lines.

Here, I focus on that last point. Asking what reforms you could actually do to the student loans system, and whether progressive reform is actually possible.

As ever, I use ‘progressive’ to mean that the change will benefit those on lower incomes, at the expense of those on higher incomes. And by ‘regressive’ I mean the opposite.

What Levers Can You Pull?

There are five primary things you can do to change the student loans system:

The government’s Augar response dealt with four of the five items above. Keeping fees at £9,250 to 2025, lowering the repayment threshold (to £25,000), reducing the interest rate (so it is always in line with the Retail Price Index) and increased the length of time a graduate has to repay their loan (from 30 years to 40)

This was always going to be the case. The government’s aim is to ensure more people pay their loans off in full, and in turn reduce the RAB charge from around 53% to 22% (so only 22p of every pound borrowed is written off after 40 years). The groups who don’t repay their loans in full are low and middle-earning graduates, and the aim is for these groups to pay more.

What The Government Didn’t Touch

The House of Commons Library modelled a rise in the repayment rate to 10% (over a 30 year loan period - note the 35 year period also modelled in the briefing is dealt with separately).

They found that this generates additional income to the Treasury - around £1,600 on average per borrower. But this was not spread evenly. Medium-high-earning graduates were hit harder than any other groups in absolute cash terms, with the highest earning graduates benefiting slightly as they would pay off loans slightly sooner. But in percentage terms the lowest earning groups paid far more as a proportion of repayments over their lifetime. 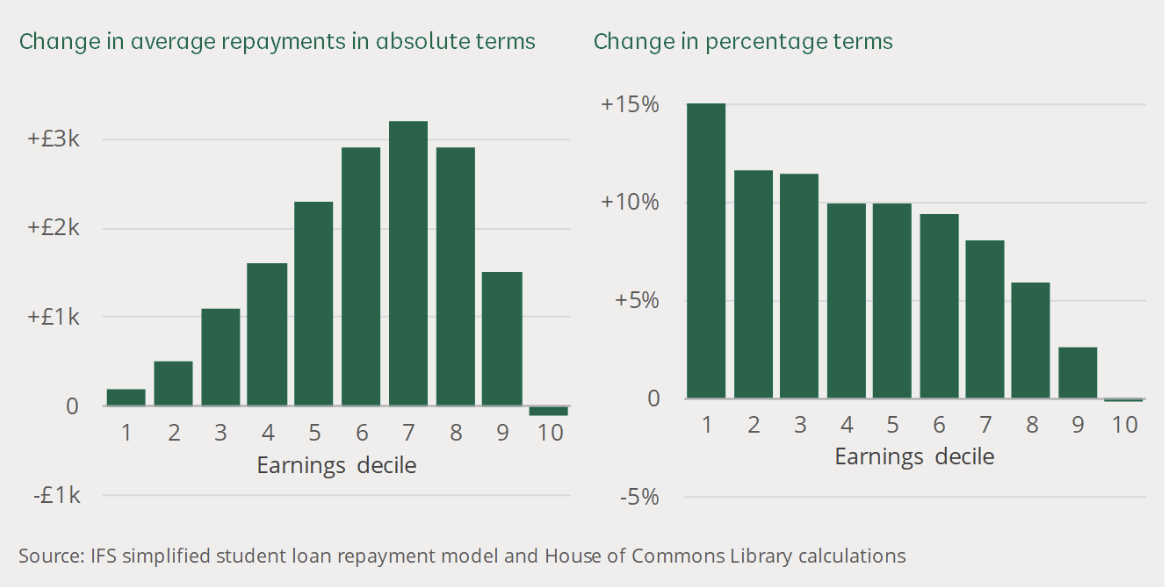 A big caveat with this model is it only covers a 30 year term. Over the new 40-year term middle and lower-earners are likely to make increased payments over this additional decade of repayments, while the highest earners in decile 10 are likely to have already paid off in full at this point.

Every lever is therefore regressive.

But maybe we are thinking about this the wrong way. Can we use these levers in any way which makes the richest groups pay more, without negatively affecting the lowest earners, while maintaining the current student loan system?

You would need to remove any incentive to pay fees up front - and this would mean raising tuition fees to a frankly ridiculous level (say £1m+), and make interest rates so high that what is owed spirals out of control (perhaps a million percent).

Under this model, nobody would pay off their loans in full - which on the surface may seem bad - but you would need a system where lifetime repayments are more appealing financially than paying fees up front.

This would then give you freedom to treat the loan system as a time-limited tax in order to capture earnings of the highest earning graduates throughout the full repayment term of the loan, something the current system doesn’t do.

But this highlights the issue; when outlandish fees and interest rates are the only way to deliver genuinely ‘progressive’ reform, you know the system is broken.

There is, however, a more sensible reform you could make which would keep the principle of “two parties benefit from university study, two parties contribute”, and would be progressive. That would be the introduction of a graduate tax.

This would close the loophole of the richest graduates paying off their loans earlier than less wealthy graduates, as repayments were directly linked to earnings it would stop the richest being able to pay fees up-front, remove tuition fees, and take away the psychological harm of young people having ‘debt’ hanging over them for their entire working lives. You could even set at a level so that 22% of university funding comes direct from the state – meeting the current RAB Charge expectation of the government’s reforms.

Being wedded to a student loans system has put us in a position where genuinely progressive reform is impossible. The system needs replacing with a more progressive and fair graduate tax. It’s time this was seriously considered by Ministers.

James Flynn is Policy Officer on the Young Fabians Education Network. He works as a Policy Analyst at a West Midlands university. He tweets about HE policy at @JamesFlynnHE.