Whoever becomes Labour’s next leader, the losers must be told: this is your party too

Labour’s endless leadership election has badly damaged the party.  Whoever is ultimately elected leader, one of their first challenges will be to unite a party only recently rejected en masse by the electorate. To take the fight to the Tories and to stand any chance of winning the next General Election, those who backed a losing candidate must be told: this is your party too.

Whatever the faults of Labour’s new electoral system, its rules were agreed some time ago and it was supported by loud voices across the Labour Movement. Therefore, any talk of “halting” the leadership election at this point should be dismissed for the hogwash that it is. Serious questions will have to be asked about whether “supporters” should really have as big a say as “members” in deciding who leads Labour, but that is for another day.

Nonetheless, the system we have is not going to change at this point and, whichever way the outcome goes, nearly half of the selectorate will be bitterly disappointed. The great swelling of Labour’s support since the General Election must now be built on by whoever leads Labour. Which is why I was so disturbed when someone added me to the below Facebook group a couple of night ago. 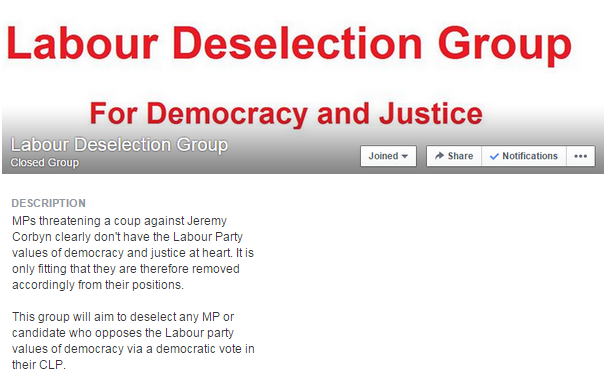 I have edited out the names of those involved and the conversations that took place because, to be honest, they would probably do a lot of damage to the participants if shared more widely. Now, the fundamental point that Labour MPs shouldn’t be mounting a coup against any leader – particularly one recently elected – is fair. But that hasn’t even happened yet, has it? So groups like this simply appear like pre-emptive, divisive witch hunts.

Even more strangely, I was immediately made an admin. Laughably, this enabled me to add dozens of moderate members I know of to try and get the founders of the group to see sense. After a wave of condemnation from people explaining that this group was divisive, and hardly the right way to safeguard Labour Party democracy, it was taken down.

You may think that this is all rather trivial. I don’t. I don’t happen to think talk of Labour MPs forming a “resistance” group if Jeremy Corbyn is elected gives off the right message either. Perhaps you have been inspired by this leadership election. Well, good for you. But from the conversations I have had with passive observers outside of politics, the whole unedifying spectacle has merely served to push us further away from electability. And further away from helping the people who need us.

Those who support or are members of the Labour Party must remember we are the people who believe that by the strength of our common endeavour we achieve more than we achieve alone. If, when the next Labour leader is announced, we do not heal as a movement, I guarantee you that we will fail as individuals.

So, please, whoever you are backing to be Labour’s next leader: remember who the real enemies are. And let’s beat them.

Sam Stopp is a Labour councillor for Wembley Central, a Young Fabian member and Chair of 'The Labour Campaign To End Homelessness'.

Sam is writing in personal capacity, and views are not representative of the organisation.