What Can We Find Out from YouGov's Poll of Labour Members?

Today, Owen Smith's polling Guru Ian Warren released polling tables conducted by YouGov into opinions of Labour Party members, on issues like what Labour hould focus on, who was to blame for Labour's loss in Copeland, and who the leader after Corbyn should be.

After Labour's disastrous loss in Copeland, Warren asked members to name reasons for the historic loss in his polling. Overall, 41% of members thought Corbyn to be the route cause of Labour's problems in the area. However, of people that voted Jeremy Corbyn in 2015, 46% blamed the result on the media,  35% on Tony Blair's Bloomberg speech, 29% on Jamie Reed, 25% on something else, 23% on the PLP and 21% on candidate Gillian Troughton. Only then, did 14% of 2016 Corbyn voters admit that the leader may be at fault, as he tied with "don't know" as explanations for Labour's catastrophic defeat.

Somewhat ironically, despite Corbynites listing Blair as the second most significant reason for Labour losing Copeland, the largest amount of discontent amongst Corbynites for Corbyn was his EU policy, with 63% of his 2016 voters saying they would support a second referendum, and 28% of Corbyn's voters explicitly saying his Brexit policy is bad decision.

With levels of disapprovals going up by 20 points, there were inevitably tables on possible replacements to Corbyn. In a leadership challenge against Corbyn, it's very obvious that he'd beat almost any challenger. Beating any rival by 30% in the toplines. However, when diving into the subsections, possible challenges look more interesting. As shown below, Clive Lewis has a 2% lead over Corbyn in swing voters in a potential leadership election.

Whilst the subsections support any speculation for a Clive4leader campaign, the subsections only do damage to ex-leadership contender Yvette Cooper. Despite coming 2nd in the topline figures, as only 2% of her support comes from 2016 Jeremy Corbyn voters.

In a post-Corbyn leadership contest, John McDonnell (who ruled himself out of a future contest this weekend), comes out best in the topline figures, ahead of Clive Lewis, Chuka Umunna and Yvette Cooper. In the subsections, Lewis, Umunna and Angela Rayner come out the best, as they were all chose by at least 20% of those polls as a potential future leader. In terms of the left of the party, Emily Thornberry is well positioned for a leadership bid, out polling both Angela Rayner and Rebecca Long-Bailey, and is more likely to make a leadership ballot on the current 15% threshold.

Despite Keir Starmer's adamant position against standing for leader, details throughout the polling places him well for a pivot to a leadership bid. Starmer is listed as the joint 2nd most Prime Ministerial Labour politician, tying with Yvette Cooper behind Jeremy Corbyn. However, unlike Cooper, Starmer's base reaches further into Corbyn's camp, with 24% of probable Corbyn voters considering Starmer to be prime ministerial, in comparison to 10% for Cooper. 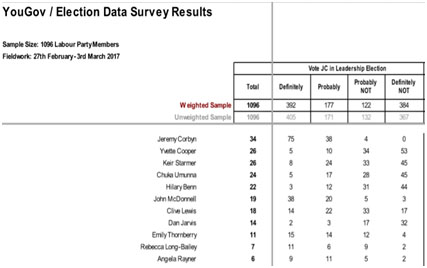 Overall, it's quite obvious the membership have no appetite for another leadership challenge. However, this seemingly has helped the membership become more objective to the pros and cons of frontline Labour politicians, as talented moderates like Yvette Cooper, Chuka Umunna and Keir Starmer are being viewed outside of the prism of a threat to Corbyn.