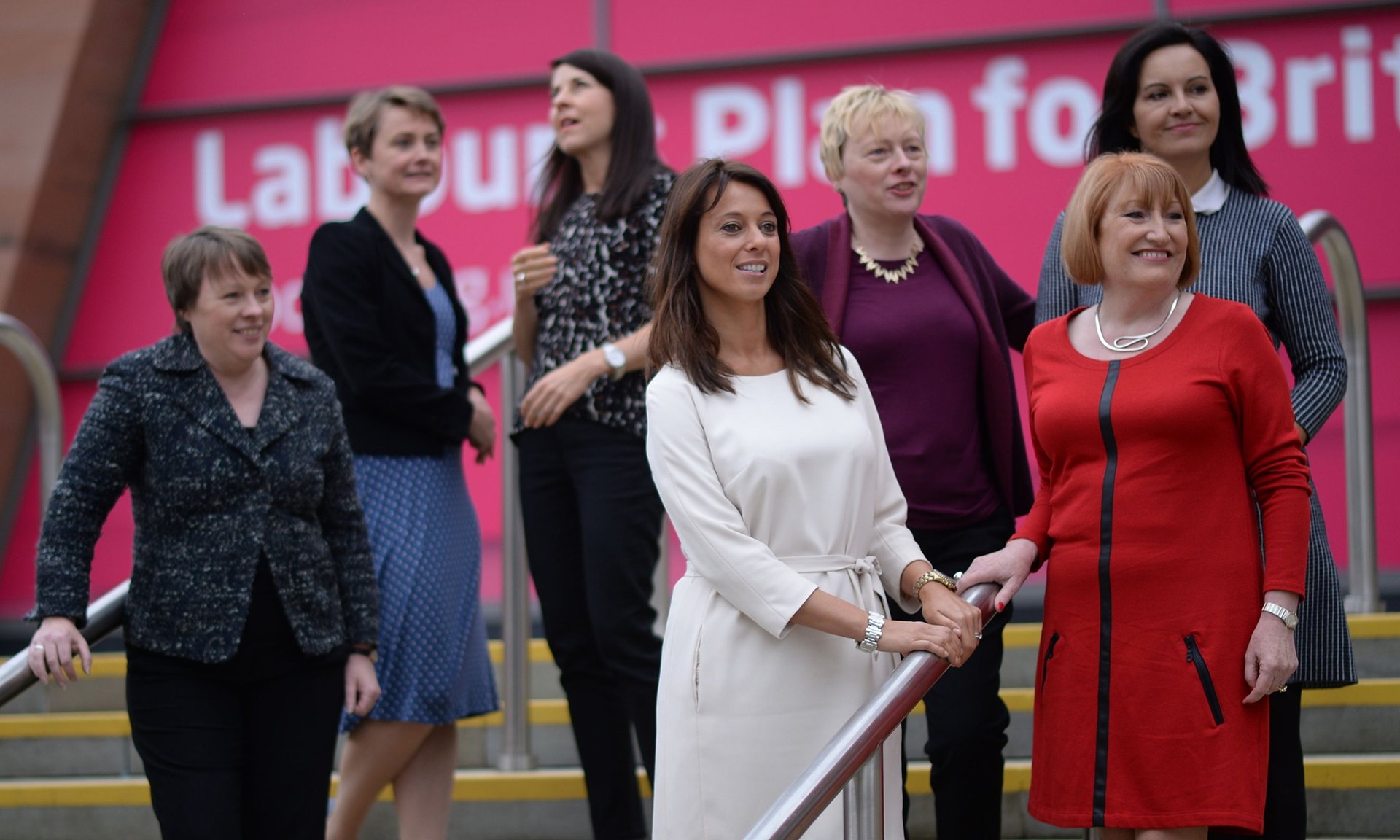 In my years here in this House I have long heard the Labour Party ask: what does the Conservative Party do for women? It just keeps making us prime minister.’

Nowhere was this better demonstrated than during Angela Eagle’s six-day leadership bid.

Here was an incredibly well-qualified gay woman from the North, an MP since 1992, with actual government experience - a woman who commanded the support of many Corbyn supporters during her deputy leadership bid last year. But she was pushed out by a far less-qualified, notoriously self-described as ‘normal’ male MP, with just 6 years of parliamentary experience.

Institutionally, the leadership of the Labour party considers itself immune to accusations of sexism - though one wonders what exactly is so progressive about the election of an all white, male leadership team. Those who are guilty of perpetuating sexism in the party too often hide behind Labour’s radical record on gender equality in government. But Eagle’s experience demonstrated that the Labour party is still not ready to accept a woman as leader.

Labour’s sexism problem is real, but difficult to measure or identify in simple numerical terms.

Yes, our parliamentary representation is better than ever. 43% of Labour MPs are now women, giving the party the most gender-balanced parliamentary team, alongside the SNP.

However, only 11% of the Labour party’s senior appointed staff are women; just 30% of CLP chairs are women and just 16% of Labour council leaders are women. Meanwhile, a third of Labour women have received sexist abuse online, and 91% are worried about taking a public political role as a result of this abuse. (Fabian Society, Practising What We Preach, 2015).

Sadly, today the advancement of Labour women is dependent on the good-will of male politicians - and nowhere is this more present than in the hard left’s relationship with women and women’s issues.

Members of the ‘hard’ left (including almost all of Corbyn’s leadership team) nostalgically pine for Britain's industrial past. They see this as a time when Labour’s class struggle was real, its credentials were more ‘authentic’, a time of direct action amongst working men in the blue collar industry.

You need only look at the real influence around Corbyn to see these patterns. A 50/50 cabinet was proudly promised – and yet these promises were swiftly forgotten. As Thangam Debbonaire and Heidi Alexander’s stories of neglect by the leadership team demonstrate, what exactly is the point of surrounding yourself with women, if you're not going to pay any attention to what they are saying?

This wing of the party takes a reactionary sexist view because authentic, Marxist ideology dictates that the class struggle is the most unequal struggle of all. Apparently, once we have the revolution, and the classes are equal, there will be no more oppression of the sexes.

The sexism on the political ‘soft’ left is rather less obvious. Vice Magazine has pithily called this ‘brocialism’, meaning ‘guys with righteous, progressive politics, but a dodgy attitude to girls’.

Consider Andy Burnham’s response last year, when asked whether Labour would ever have a female leader. His patronising reply was ‘when the time is right, and when the right candidate comes forward’, despite the fact that both Yvette Cooper and Liz Kendall were equally as qualified and competent as he was.

This sort of sexism is unexpected. It’s practised by men, like Burnham, who call themselves progressive and radical, and even feminists.

It’s difficult to describe, but if you’re a woman with left-wing male friends or colleagues, you’ll know what I’m talking about.

Have you ever been speaking and been abruptly interrupted by a left-wing man? Have you ever made an intervention during a debate with left-wing men only to find that your legitimate comment has been totally ignored? Have you ever defended equal representation with a man of your politics, only to be told by him that ‘if I were a woman, I would be angry that the only reason I was successful was my gender’? Have you ever been a victim of ‘mansplaining’ by a so-called left-wing, male intellectual?

If any of this looks familiar, it looks like you’ve come face-to-face with soft left sexism.

The problem is, both of these sorts of sexism are pervasive in the Labour Party.

It isn’t the fault of Jeremy Corbyn and Tom Watson that the Labour membership elected an all-male leadership team last year, or that no woman who has run for Labour leader hasever polled higher than any man in a Labour leadership election.

But the Labour leadership is responsible for the actions they have taken since then.

Soon after his victory, Corbyn pledged his commitment to women’s representation. But where are the women of Corbyn’s shadow cabinet today?

Are they heading up the Treasury team? No, of course not! No woman has ever held the position either of Chancellor or Shadow Chancellor. How about arguably the next most important department for the economy, heading up Business? No way - though Angela Eagle had served brilliantly in this role before she resigned. What about at Justice? Not there either - nor has a woman ever held that position in a Labour shadow cabinet.

That’s because women on the left are largely assigned the ‘caring’ roles - think nursing, teaching, or any other job that is stereo-typically ‘female’, and you’ll get the idea.

Two women in succession under Corbyn as shadow health secretary? Check. Three women in succession heading up Education? Of course - and Angela Rayner now doubles up as Shadow Minister for women and equalities. Why would you want to waste time giving that to someone as a full time role?

All three of the Labour city region mayoral candidates announced last month were men - while the shortlists included just one woman. As Jess Phillips MP has said, this owes a great deal to Corbyn’s laziness on the issue, paying lip service to feminism, ‘wearing a t-shirt’, but unwilling to engage with ‘deeds not words’.

This is bad enough - but some of the sexism on the left is absolutely appalling.

Consider the 45 women MPs who wrote to Corbyn to tell him that he had failed to stop the horrific abuse of Labour women. This has included death and rape threats, as faced by some of Labour’s most prominent women - not to mention the vile anti-semitic abuse faced by Luciana Berger, and the threats made to Eagle during her campaign. You need only scroll through twitter comments made to women Labour MPs (particularly those who talk openly about feminism) to have a taste of what they have to put up with. This is particularly pertinent, given the overwhelming left-wing bias that exists amongst users of twitter - meaning 'trolls' are much more likely to attach to the far left than the far right.

So what can we learn from this rather depressing picture?

Firstly, the Labour party and its leadership must understand that calling yourself progressive, and really caring about advancing the position of women, are not the same thing at all. By the same token, it is not good enough to lazily claim Labour’s historical commitment to equality as inherently synonymous with feminism. While Labour has achieved more for women than the Tories have ever done, this doesn't make Labour the natural party of women’s equality: it has to fight for that privilege.

Secondly, Labour men who are so proud of their progressive credentials that they feel it unnecessary to have to bother practicing what they preach desperately need to reevaluate their behaviour. That applies to us all. Those on the left too often rely on some sort of innate, intrinsic moral superiority: but if you want to claim you care about the cause of women, you need to demonstrate that via your actions. Listen a little more, talk and interrupt a little less. Point out sexism when you see it, however minor it may seem. Question the real politics behind your apparently progressive instincts.

Thirdly, Labour women should no longer have to rely on the gracious magnanimity of their male colleagues to get the gender equality they deserve. We need an unequivocal commitment from the party leadership to have an equal cabinet, and gender-balance amongst everything from local council candidates to senior political advisers. We need to foster a party culture where women are genuinely listened to and are not simply ‘female window dressing’ (as Caroline Flint famously described in 2009) - and one where women can just also hold the highest offices of state.

And finally, we need to see Labour’s problem in broader terms than just the numerical. You can have 50:50 representation in parliament, and indeed in the shadow cabinet - but that on its own will not address the deep-seated problems within Labour’s culture.

If it cannot come to terms with its sexism, it will begin losing irrevocably the support of women who instinctively gravitated towards the party in the past.

Daisy-Rose Srblin is a Labour Party member, and writes in a personal capacity.